After 20 years of steady drops, the Great American Crime Decline seems to have stalled.

The decline in violence has been one of the fundamental facts of modern society. After rising for more than two decades, the U.S. violent crime rate peaked in 1991, then began to fall precipitously. Between 1991 and 2010, it dropped by nearly 50 percent.

But the pace of that decline has leveled off: Between 2010 and 2017, it fell by just about 5 percent, with the slope of that period pronouncedly shallower than the preceding one. During that period, there were notable, albeit small, increases in several categories of crime, including homicide. 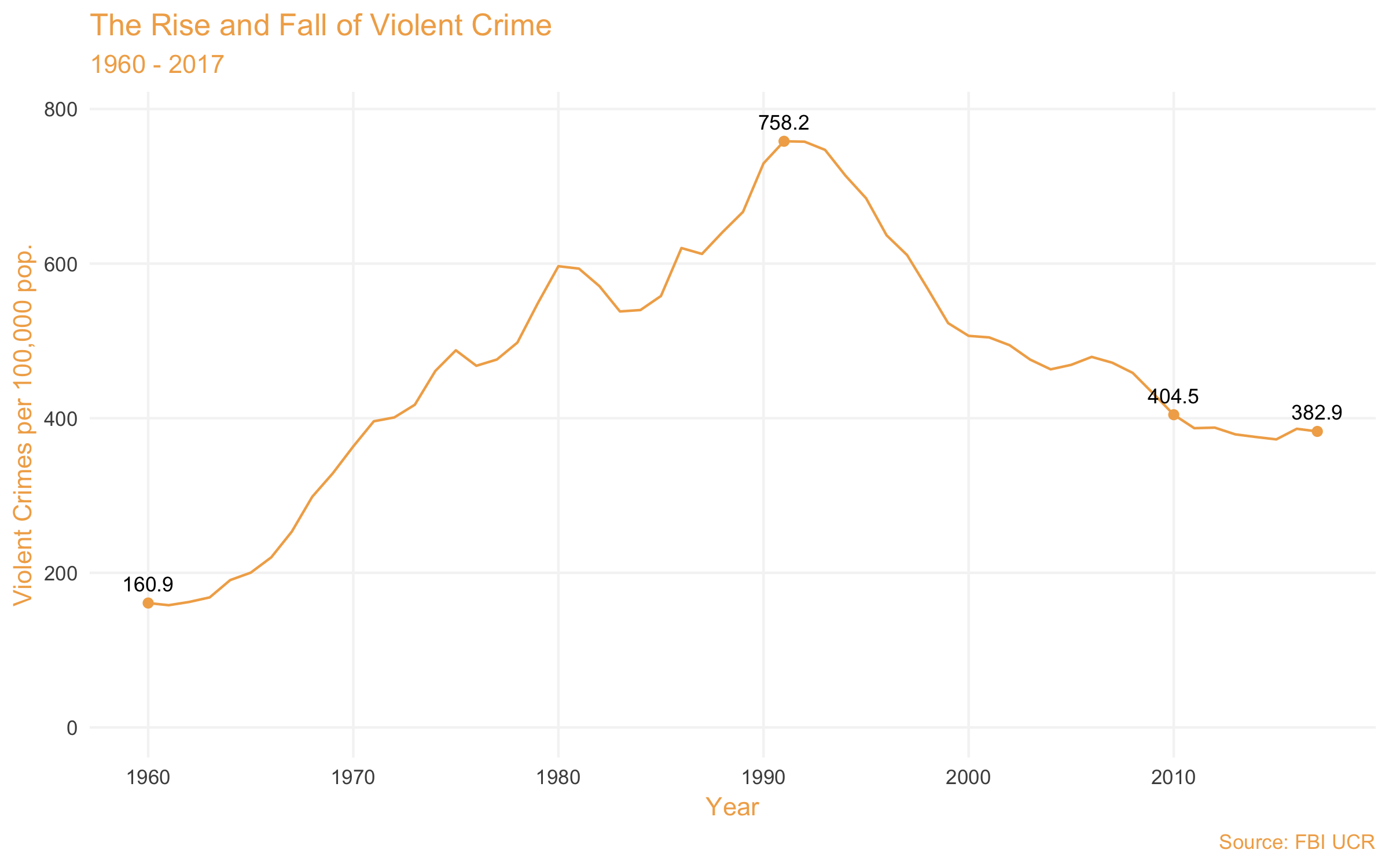 If these figures are any indicator, we may have reached a "new normal" in violent crime rates—lower than their peak in the 1980s and 1990s, but equal to or higher than the 1960s, when the crime wave began.

Although we have passed epidemic levels, that hardly matters to the thousands of victims of violent crime every year, including the 15,000 to 20,000 homicide victims per annum. There are social justice implications to our failure to bring down the violence rate, too: Homicide is the second leading cause of death for young Latino men and the primary cause of death for young black men. 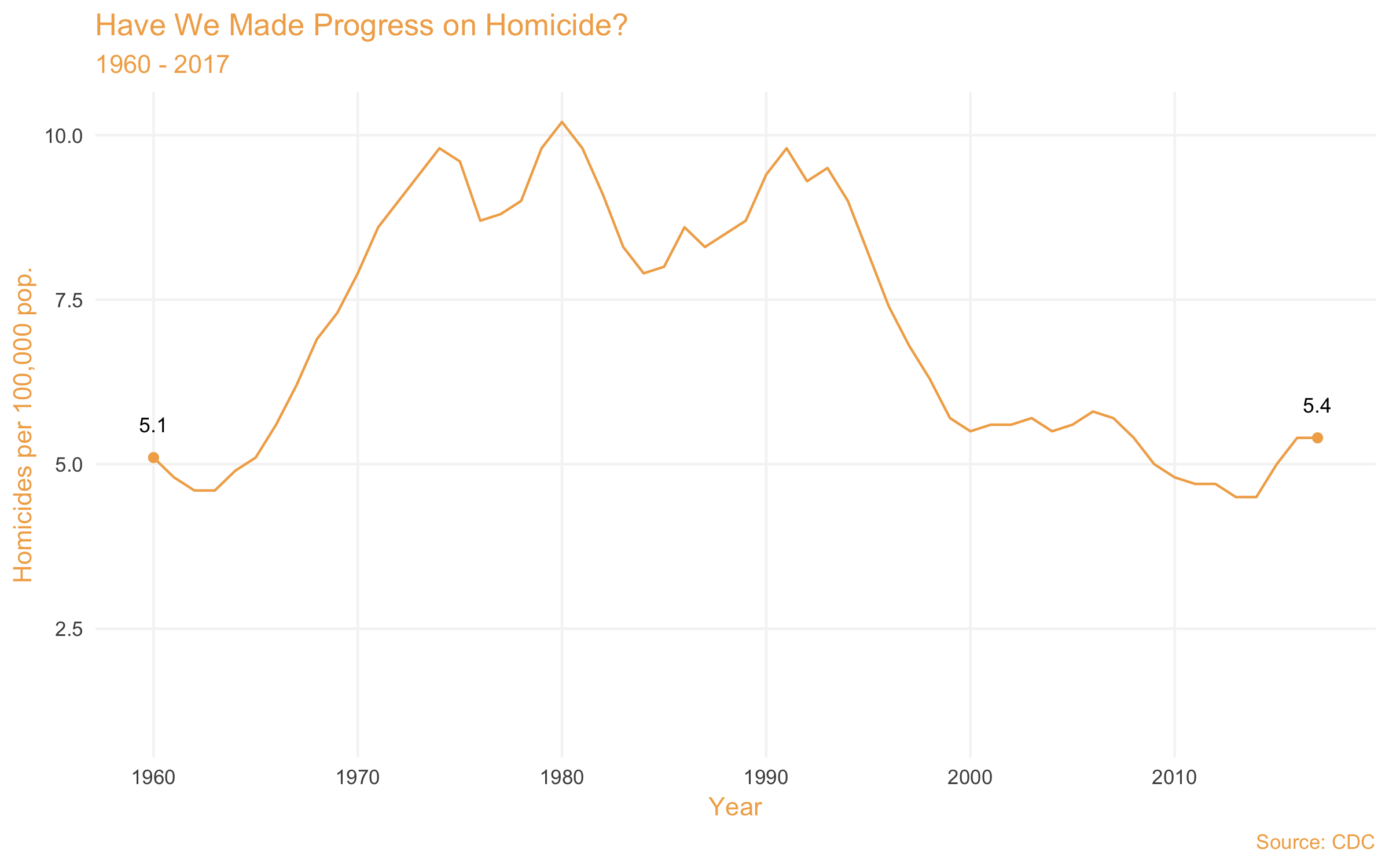 "Looking back, one might observe that the U.S. experienced a remarkable decline in violence and crime over the past twenty-five years," writes Thomas Abt in his new book, Bleeding Out. "Another equally valid observation is that after more than fifty years we have made no progress whatsoever."

Abt has an illustrious crime-fighting pedigree. Now a research fellow at Harvard’s Kennedy School of Government, he worked previously as public safety chief for Gov. Andrew Cuomo (D., N.Y.), as a high-ranking official in the Obama Justice Department, and as an assistant district attorney in Manhattan. That means that he has dealt with crime and its consequences up close, but also has the empirical training to think critically about what works and what doesn't.

Abt's basic argument in Bleeding Out is that the relative lack of progress in the past 50 years is not a necessary reality, but a contingent fact of our policy choices. Specifically, Abt thinks that the application of proven policing interventions could cut homicide rates in major cities by 10 percent every year for the foreseeable future.

Abt's approach turns on a simple insight: Violent crime, particularly homicide, is highly concentrated among a relatively small share of the people and places in the United States. For most major cities, less than 1 percent of the population is responsible for 50 percent or more of the violence. Two percent of U.S. counties cope with 51 percent of all murders, while 54 percent see none. 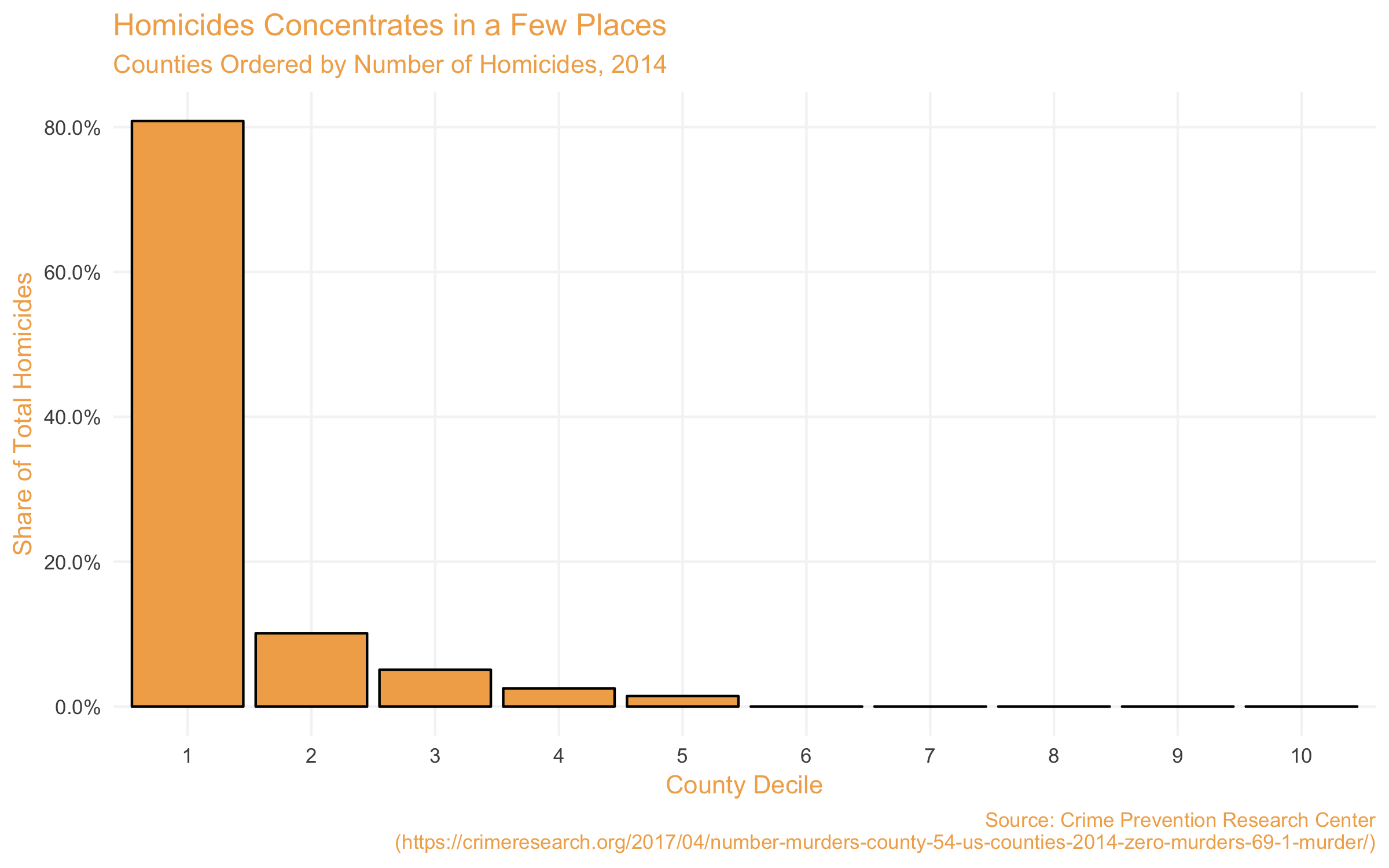 In other words, crime follows what is called a pareto distribution: A small number of criminals are responsible for the majority share of the crime. Pareto-distributed phenomena show up throughout the social and natural sciences. They are popularly associated with the 80-20 rule, which says that there are many phenomena where 20 percent of the population is responsible for 80 percent of the phenomenon. In the case of violence, the skew is even more extreme.

For purposes of policy design, this simple fact can be quite powerful. Many argue that in order to reduce violence, we need to target "root causes": reducing poverty and hardship, almost invariably through an expansion of social programs. But people who are poor, or who grow up in broken homes, or who suffer from substance abuse problems, do not as a general rule harm or kill others. It is only a small percentage of even that group that actually drives the homicide rate.

In light of this reality, the basic axiom of Abt's antiviolence strategy is: to reduce violence, target violence. Most homicide is committed by a limited number of people in a limited number of places; therefore, if we focus anticrime policy on these people and places, we can see reductions of the kind Abt promises. "Put these proposals into place," he promises, "and in a decade the US Murder rate will resemble Canada's."

Bleeding Out is a fast read—the whole book clocks in at just over 200 pages, less notes, acknowledgments, and appendices. Much of that space is given over to chapters that feel like padding—in total, it's not clear that Bleeding Out needed to be a book as opposed to a long-form essay.

But where Abt does make policy recommendations, they are clear, concrete, and backed up with a comprehensive understanding of the empirical literature. Offer those likely to become shooters a mix of carrot and stick, following the model of the Group Violence Reduction Strategy; swiftly and effectively punish those who take up arms anyway. Focus police resources in crime "hot spots," including supporting place improvements. Work to take guns out of the hands of the most dangerous people, and work to discourage gangbanging behavior through positive interventions.

It is not obvious that these strategies can produce the kind of results Abt says they can, but they probably will do something. More important, they clearly avoid any of the hot controversies in policing that polarize people on the issue—both conservatives and liberals can back them.

The one gaping hole in Abt's analysis is a discussion of post-conviction punishment in general, and prisons in particular. Perhaps this is because his work is mostly on policing, or perhaps because prison policy can be too hot to handle.

But Abt’s model of violent crime, especially homicide, as a highly concentrated phenomenon, recommends the incapacitative function of prisons—taking the worst of the worst off the streets permanently should have a huge impact. We know that there are diminishing marginal returns to locking people up. If we can identify the most violence-prone individuals, prioritizing incarcerating them should have a huge effect.

In spite of this absence, students of criminal justice should take Bleeding Out seriously. Net of the past 50 years, we have barely moved the dial on homicide and violent crime. Abt persuasively argues that as much as poverty causes violence, violence also causes poverty—alleviating the former, therefore, would not only save thousands of needlessly lost lives, but help reinvigorate some of America’s most benighted communities.

Cuomo: Trump ‘Better Have an Army’ If He Comes to New York

More than 70 Face Federal Charges Amid Violence in Portland