The progressive left is increasingly agitating for the defunding of America's police departments, even as decades of research indicate that better-funded cops make communities better while cutting back would see crime spike.

Prominent Democrats, spurred on by protests of the killing of George Floyd, have started to call for the nation's police forces to be "defunded." Police departments, Democratic legislators and leaders have argued, eat up far too large a share of public spending. That money, they have said in recent days, could instead be diverted to schools, therapists, and other programs that target the "root causes" of crime.

A closer look at the data, however, challenges this story. Policing, official statistics show, accounts for less than 5 percent of state and local budgets—a share that has shrunk annually as a percentage of GDP since 2010. That low level of spending may have trickle-down effects, leading to lower salaries, more stressed-out officers, and lots of unsolved crime.

What is more, decades of research find that more spending on and hiring of police are potent anti-crime measures, with one study concluding that each dollar of spending creates $1.63 of social benefit. Spending more on police officers could also help make a more professional police force, in line with reforms now being weighed by the White House and both congressional Democrats and Republicans.

In short, the weight of the evidence suggests that defunding the police could be a disaster for American society—and that giving them more funds would be a substantial boon to public welfare.

Defunding advocates have pointed to the seemingly large share of their budgets that cities spend on the police. Over half of Los Angeles's, for example, went to police in FY 2019. Sen. Kamala Harris (D., Calif.) made this point during an appearance on The View, noting that "in many cities in America, over one-third of their city budget goes to police."

These estimates are misleading, however, confusing the budget responsibilities of different levels of government. Cities spend a lot on police, but that's because counties, states, and the federal government pick up the tab for most other things while spending surprisingly little on cops.

According to an Urban Institute analysis, state and local governments combined spent $115 billion on the police in 2017. That may sound like a lot of dough, but it's only about 4 percent of total spending—less than public welfare (22 percent), primary and secondary education (21 percent), and health and hospitals (10 percent). State and local spending on police has hovered between 4 and 5 percent of budgets since at least 1960. 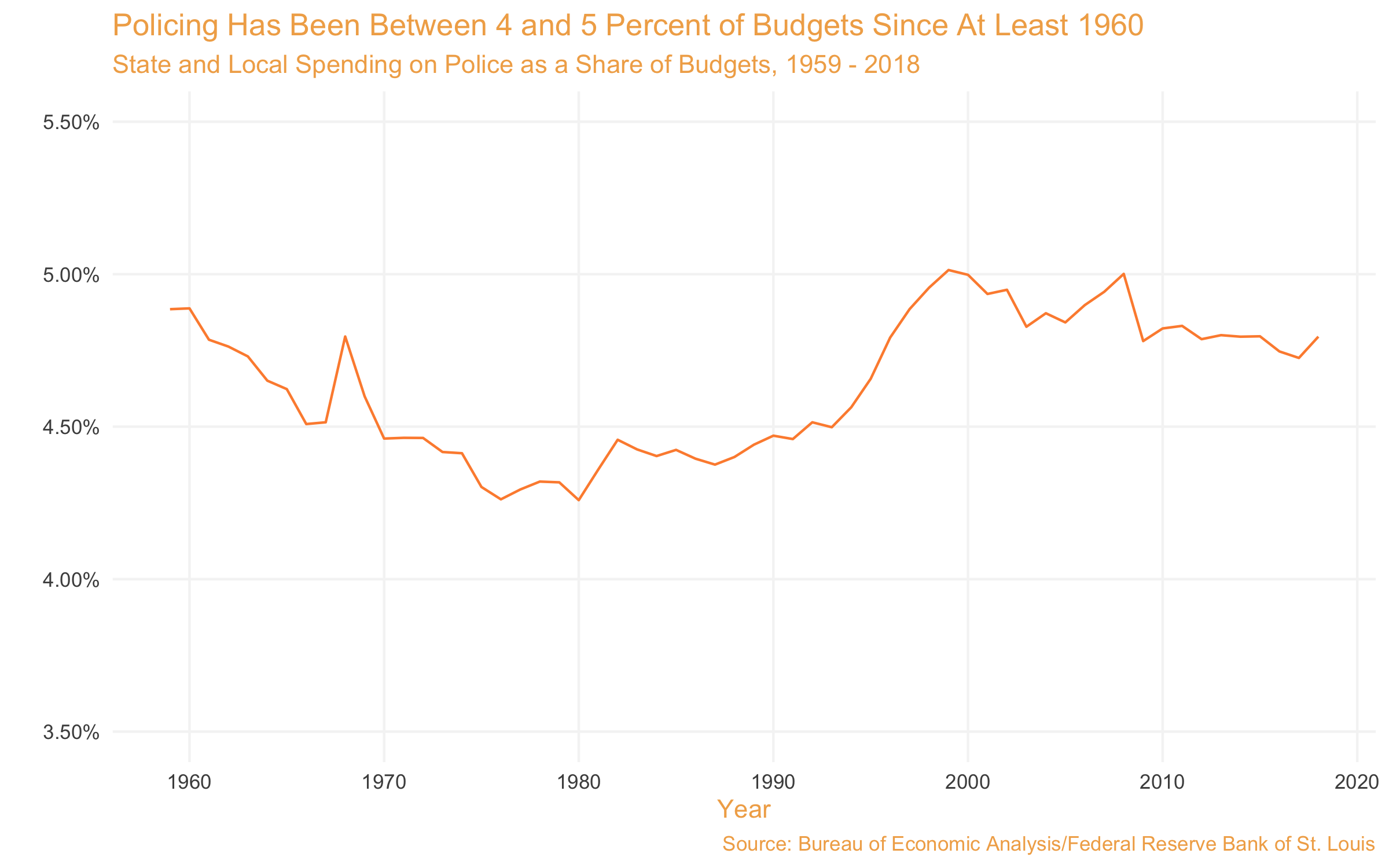 Police also receive far less support from the federal government than other programs. Federal dollars approximately match state spending on education; by contrast, federal spending accounts for only about 20 percent of police funding. The Department of Justice earmarked just $13.8 billion for police in 2017, about half a percent of the federal budget.

Those stingy rates trickle down. The median police officer makes $65,000 a year—on par with high school teachers, a group many believe is underpaid. Half of cops necessarily make less, and many struggle at poverty levels of income.

Low funding has contributed to the crises police departments currently face. After peaking before the Great Recession, police forces are shrinking, leaving fewer hands to do more work. At the same time, policing has become deadlier: Not only are over 150 officers killed in the line of duty every year, but police suicides are on the rise. Cops are 40 percent more likely than the general population to take their own lives, evidence of the heavy mental health toll taken by frontline work.

There's a Lot Police Can't Afford to Do

Police give Americans a lot for their money. Innovations in and increased funding for policing are widely considered to have contributed to the 30-year decline in violent crime.

At the same time, crime statistics testify to police's lack of resources. In 2018, less than half of violent crimes and less than 20 percent of property crimes were solved; four in 10 murders are not cleared.

The problem might be bigger than that—less than half of violent victimizations are ever reported to the police. 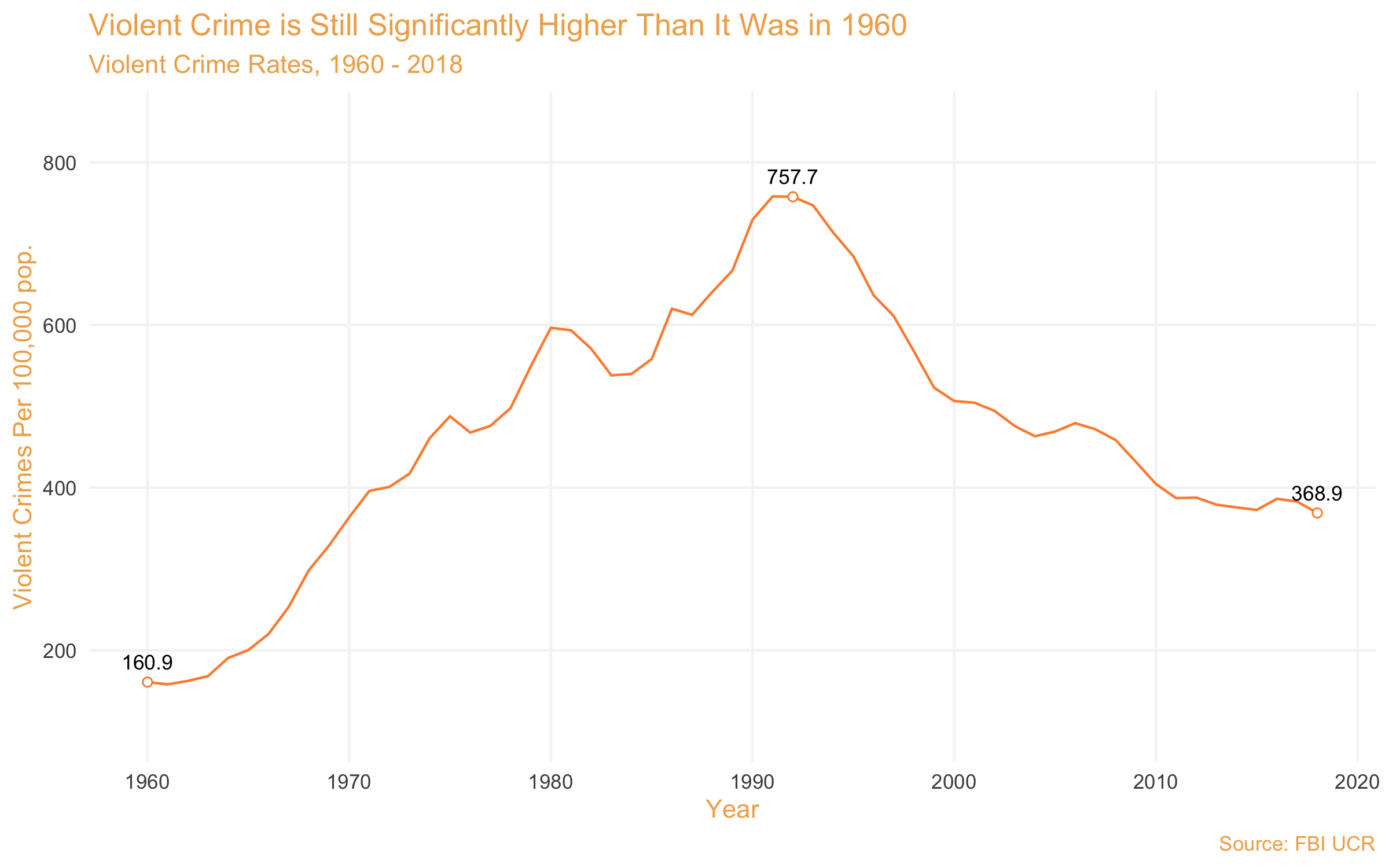 Even as it has dropped from the late-80s highs, violent crime is still more than twice as common today than in 1960. This, former Obama DOJ official and criminologist Thomas Abt has argued, is a remarkable failure, the effects of which are felt disproportionately by the Latino and black men most at risk for homicide.

Advocates of defunding point to these numbers as evidence that policing doesn't work. But study after study shows that hiring more cops drives down crime—a sign that low clearance rates are a reason to spend more, not less, on the police.

That spending paid off. Analysis of data from 1990 through 2001 found that COPS-hired police cut "auto thefts, burglaries, robberies, and aggravated assaults." When the 2008 federal stimulus infused $2 billion into COPS, cities that received money saw a 3.6 percent increase in police, resulting in a 4.8 percent decrease in violent crimes and a 3 percent decrease in property crimes. For each 11 added cops, there was one fewer homicide.

The evidence goes further. One 2006 paper found that when police unions lose salary negotiations—and police pay suffers—"arrest rates and average sentence length decline and crime reports rise relative to when they win." It even shows up in other countries: Adding resources to help cops fight street crime in parts of England and Wales caused a significant decline in robbery rates.

One statistical survey sought to quantify the effect of policing. The authors concluded, based on 50 years of data, that each additional dollar spent on police added $1.63 in social welfare—"implying," they wrote, "that U.S. cities are in fact underpoliced."

In short: There is strong evidence to support the idea that America could lower its crime rate further—an enormous boon to every community, especially disadvantaged ones—by spending more on police than the relatively paltry sum we currently do.

Hiring more cops is actually quite popular: A 2019 Vox survey found that 60 percent or more of respondents of all races would support increasing the number of police officers. Other polling finds support for cutting police budgets consistently below 20 percent.

Even Sen. Bernie Sanders (I., Vt.) called for an increase to police wages as part of a reform plan put forward earlier this month, writing that the nation's police forces need to be able to "attract the top-tier officers we need to do the difficult work of policing." Joe Biden has also promised to spend $300 million on community policing across the country.

Sanders and Biden's key insight is that improving the quality of American policing likely means spending and hiring more, not less.

Low wages attract fewer well-educated employees: Only 30 percent of police have a four-year degree. The increasing relevance of technology to policing, however, requires a more educated workforce, according to the Police Executive Research Forum. More generally, paying more money for better employees is a bedrock principle of civil service reform, explaining why the highly effective government of Singapore pays its top officials millions of dollars a year.

Increasing the actual number of police officers may also reduce instances of police misconduct by reducing the strain on individual officers and increasing police capacity to interact constructively with the community. One success story is Camden, N.J., where the department was disbanded and reconstituted with more officers on the beat. Seven years later, violent crime is down, while public support is up.

Sanders and Biden, in other words, seem to have cottoned on to what the research says. If leaders want safer communities and better officers, they need to prepare to spend more, not less, on the police.