New York Times reporter Helene Cooper said Monday during a discussion of the death of Iranian general Qassem Soleimani that the U.S. Department of Defense was "quite tragically" good at killing people.

"This is something that the American Defense Department, quite tragically almost, is very good at doing. We know how to kill people," she said during an appearance on "The Daily" podcast. "And we had been tracking for more than a decade, almost two decades, Qassem Soleimani."

Listening now and this line just floored me: "This is something that the American Defense Department, quite tragically almost, is very good at doing: we know how to kill people." Sorry, what? The tragedy would be if our military were very bad at killing people! https://t.co/jlc0FNit7d

Cooper and spokespeople for the New York Times did not respond to requests for comment or elaboration.

Cooper, the Times‘s Pentagon correspondent, appeared on the podcast to discuss her reporting on how President Donald Trump arrived at his decision to order the drone strike on Soleimani, the terrorist leader of Iran's Quds forces and one of the country's top military commanders.

She reported that Trump was angered by the Iranian-led assault on the U.S. embassy in Baghdad and chose the most "extreme option" offered by military aides.

Iran has vowed revenge against the United States for Soleimani's killing, while Trump warned he would hit 52 Iranian sites "very hard" if the Islamic Republic were to attack U.S. citizens or assets in retaliation. Trump drew criticism for saying he would potentially target Iranian cultural sites.

Iran announced Monday that in the aftermath of Soleimani's death it would no longer abide by any of the restrictions on its nuclear program imposed by the 2015 Joint Comprehensive Plan of Action. In 2018, Trump pulled the United States out of the nuclear deal, which had been a central foreign-policy achievement of the Obama administration. 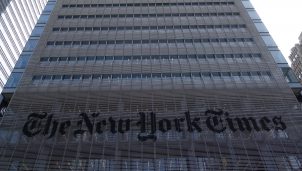