The New Republic magazine is facing backlash from media insiders for partnering with a British magazine that critics say has an anti-Israel bias.

The New Republic, which has faced several public setbacks since owner Chris Hughes embarked on an ambitious redesign, announced on Monday that it had partnered with Britain’s far-left  New Statesman magazine.

Media insiders and former TNR contributors called the partnership shocking and criticized Hughes for partnering with a publication that has advocated in favor of boycotts against the Jewish state and employed a writer who suggested that non-Muslims "live their lives as animals."

TNR, these critics say, has abandoned its longtime pro-Israel reputation in the months since wealthy socialite Hughes assumed control of the venerable publication from former publisher Marty Peretz.

"The New Republic announced today [Monday] that it has partnered with the British magazine the New Statesmen to publish a select number of its articles on The New Republic website and in tablet editions of the magazine—and vice versa," TNR said in a statement provided to Politico on Monday.

"Century-old magazines on opposite sides of the Atlantic, the New Republic, and New Statesman share a similar political and cultural outlook and a mission to produce quality journalism in an era of immense technological change," the statement read.

"This partnership will increase the global voice and viewership of both brands and deliver thought-provoking journalism about American and British politics and culture to a combined audience of over four million monthly readers."

The New Statesman has a history of anti-Israel advocacy and has what one media insider described as a "consistent, obsessive anti-Israel bias."

"The New Statesman has historically and repeatedly displayed hostility towards the State of Israel and its defenders in Britain, and it speaks volumes about the decline of TNR that it would seek to partner with such a disreputable old Trotsky outlet," said Raheem Kassam, a British writer and publisher who currently serves and founder and editor of TrendingCentral.com, a breaking news website.

For example, the New Statesman came under intense criticism in 2002 when it published a cover story entitled, "A Kosher Conspiracy." 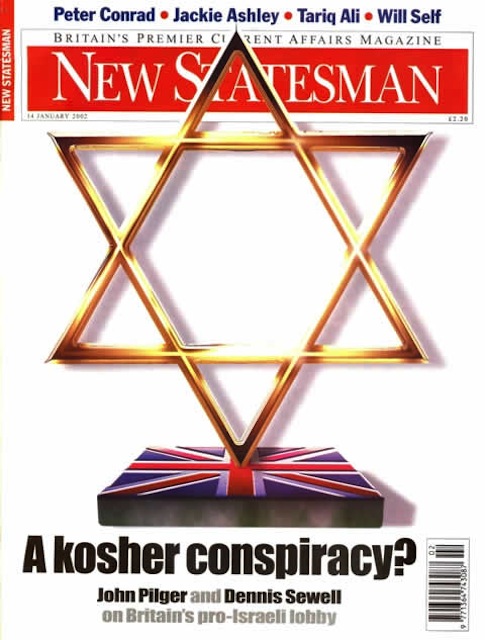 The magazine’s cover featured a large image of the Star of David atop a British flag.

The article and cover drew fire from pro-Israel critics and Jewish groups that accused the New Statesman of anti-Semitism.

The outrage and public demonstrations in front of the magazine’s offices ultimately led then-editor Peter Wilby to offer a public apology.

"We (or more precisely, I) got it wrong," Wilby wrote to readers.

In 2010, for instance, writer Laurie Penny compared Zionists to rapists.

"Chauvinism is about territory and ownership," Penny wrote. "Zionist chauvinism, at its most extreme, sees the land between the Dead Sea and the Mediterranean as the birthright of Israelis, property for the consumption and use of all Jewish people, and understands the personhood of individuals who happen to inhabit those lands as an uncomfortable side issue."

The New Statesman is also the former home of controversial writer Mehdi Hasan, who has praised Iran’s anti-Semitic Ayatollah Ali Khamenei and suggested non-Muslims are "animals."

Hasan, who resigned as the magazine’s political editor in 2012 to become the Huffington Post’s political director in the U.K., continues to contribute articles to the publication.

Hasan has published multiple videos in which he rails against non-Muslims.

"We do not bend our law, or morality for short term aims," Hasan is seen saying in one video recording of his lecture. "Never. And we never lose the moral high ground."

Hasan describes disbelief in Islam as an "infirmity" or mental illness in a separate recording.

The New Statesman consistently publishes articles critical of the "Israeli occupation" of the West Bank and Gaza.

One August 2013 piece criticizes BuzzFeed for permitting the Israeli embassy to publish a map of Israel that the New Statesman called "very one sided."

"The piece is the latest example of the Israeli state's impressive online PR operation," the article concluded.

Another August 2013 article criticized Israel for building a railroad to improve transportation for the Palestinians. The New Statesman said the railroad would only "permanently embed the occupation."

The British magazine has also claimed at multiple junctures that the Middle East peace process would fail mainly because of Israeli settlers.

"Whether we like it or not, the settlers have won," declared the headline of a July 2013 article penned by Hasan. "The two-state solution is now impossible."

The publication has also thrown its backing behind an international boycott of Israel. Another article published around the same time advocated in favor of the world punishing all "firms and institutions that operate in the occupied territories."

The New Statesman also claims Israel is engaging in apartheid and segregation in the West Bank.

The magazine’s January 2013 issue focused on "The A-Z of Israel," including articles that purported to expose the Jewish state as fundamentally non-democratic.

One former TNR contributor called the decision to partner with the New Statesman highly misguided.

"This is really the first time I’ve ever been ashamed of having any association with this magazine," said the writer. "I just don’t see why [the partnership] is necessary. Why tie your masthead to a publication with such a spotted reputation? Now anything they publish will be tied to you."

When reached for comment about the New Statesman’s view on Israel, a TNR spokeswoman said, "We, uh, don’t have a comment at the moment."