"We have seen the press reports of the prime minister's comments, and in those reports, you can see for yourself the scholarly evidence obviously supports a different position," Kirby said.

Netanyahu received heavy criticism for his comments Tuesday, with some critics saying that he was "absolving" Hitler of responsibility for the Holocaust.

In a statement Wednesday, Netanyahu said that his comments were misconstrued.

"It is absurd. I had no intention to absolve Hitler of responsibility for his diabolical destruction of European Jewry. Hitler was responsible for the Final Solution to exterminate six million Jews," he said. "It is equally absurd to ignore the role played by the Mufti, Haj Amin al-Husseini, a war criminal, for encouraging and urging Hitler, Ribbentropp, Himmler and others, to exterminate European Jewry. There is much evidence about this."

In the State Department briefing, Kirby avoided questions about whether or not the administration should call out Netanyahu for his statement, instead stressing the importance of "moving away from rhetoric or actions that just encourage violence."

He then said that he would not "get into a historical debate about this," and refused to characterize "each and every incident and each and every word spoken."

"What we want to see is for calm to be restored, for any inflammatory rhetoric on any side to stop. Ultimately, anything that encourages the violence to continue is unhelpful to the security environment," he said.

The State Department was careful not to overtly rebuke the prime minister for his claim after Kirby came under fire last week for accusing Israel of terrorism. 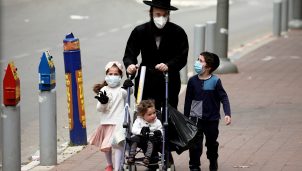