Murder is on the decline in America, according to a new FBI report.

The nation's top federal law enforcement agency found that homicides fell by 6 percent in 2018. The decline in homicides is part of a 3 percent drop in the violent crime rate, according to the Uniform Crime Report, the FBI's annual tally of crimes reported to local police departments. The 2018 decline follows several years of slight increases in homicide and violent crime, driven largely by spikes in major cities such as Chicago and Washington, D.C.

The drop may represent a continuation of America's long-running crime decline, or of the aggressive tactics of President Donald Trump's Department of Justice. The relatively small magnitude of the decline, especially in light of other evidence, suggests America may have reached a new normal for violent crime rates. 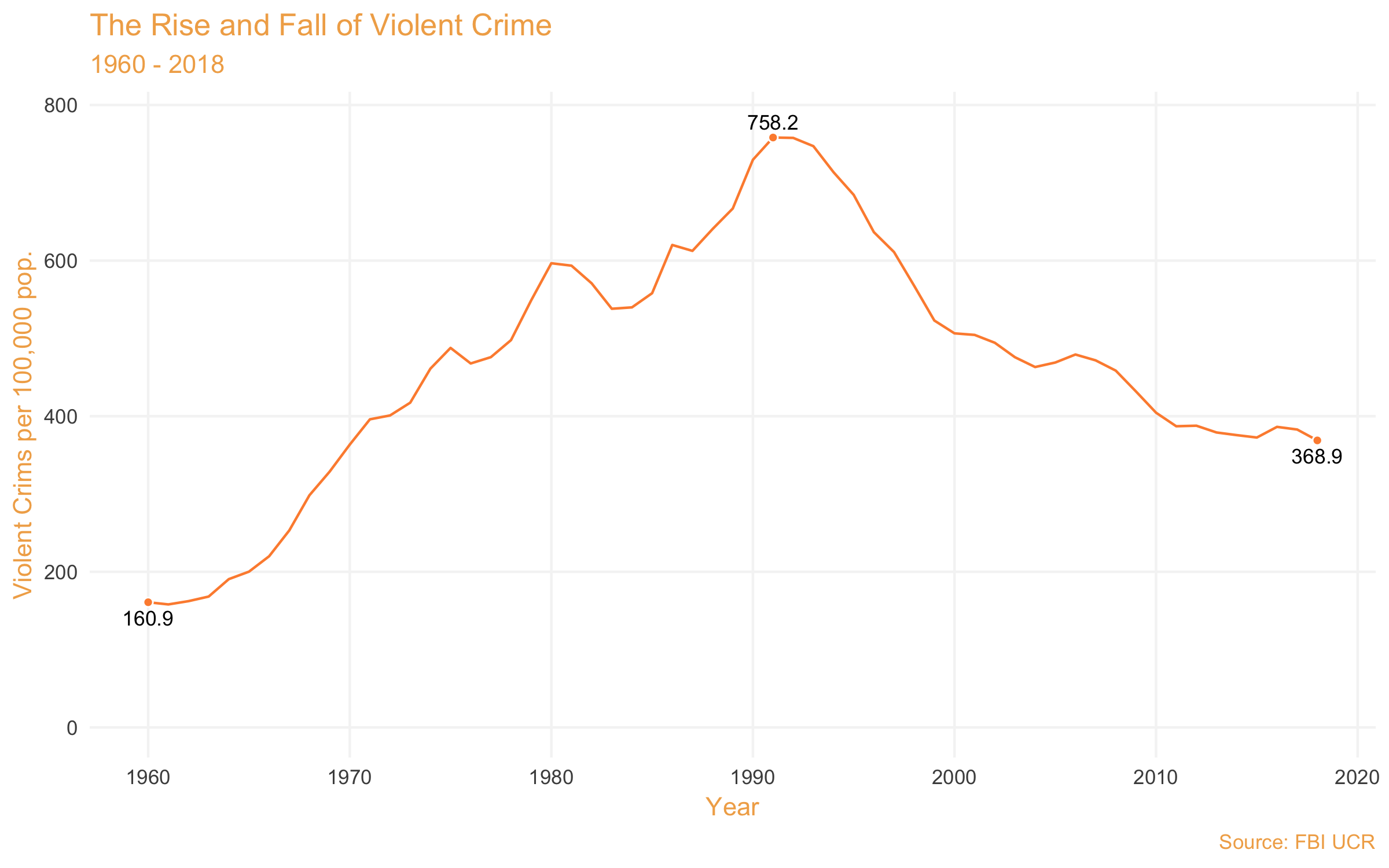 Overall, violent crime rates fell by just under 4 percent, from 383.8 offenses per 100,000 people to 368.9, the report shows. That decline reflects not just the 6 percent reduction in the homicide rate, but also decreases in the robbery and aggravated assault rates. Among violent crimes, only the rate of rapes increased, rising from 41.7 rapes per 100,000 people to 42.6. The property crime rate fell for the 19th consecutive year.

The drop in the homicide rate, in particular, represents a significant change for the nation. In 2015 and 2016, it rose for the first time in more than a decade, prompting Jeff Sessions, the then-newly minted attorney general, to warn of "a dangerous new trend that could reverse the hard-won gains of the past four decades." The trend continued into the first half of 2017, before finally abating toward the end of the year.

The lion's share of homicides took place in large cities, which had previously been responsible for the national spike in violent crimes over the last several years. The FBI's data indicate that in 2018, homicide fell in cities of 25,000 or more, and rose slightly in smaller cities—although that rise is thanks to just four "added" homicides. The nation also witnessed declines in "Nonmetropolitan counties," that had populations greater than 25,000 or fewer than 10,000 inhabitants; those in between saw a slight increase. These percentage-wise increases mask only small changes in the numbers of homicides.

In its own analysis, the left-leaning Brennan Center for Justice found that homicide rates fell in 16 of the 30 largest cities in the United States, while 12 experienced increases. The largest percentage-wise drop was in Las Vegas, which saw 121 murders in 2018 compared to 205 in 2017; the largest increase was in Washington, D.C., where murders increased from 116 in 2017 to 160 in 2018.

The report notes that 2018 saw a significant drop in gun homicide, and in particular homicide committed with rifles. This decline is particularly noteworthy given the increasingly heated rhetoric around firearms regulation from contenders in the 2020 Democratic primary.

Although violent crime and homicide rates decreased in 2018, they continue to exceed those of 2014. By comparison to the precipitous rates of decline in the 1990s and early 2000s, the annual rise and fall of the past 10 years seems to have coalesced around a violent crime rate far below its 1992 peak, but far above where it was in 1960. This same trend appears in the recently released National Crime and Victimization Survey, which tracks crime victimization through a statistical sample of the population. Both survey findings suggest the same conclusion: America's 20-year crime decline may have come to a close.

ANALYSIS: Liberal Animosity Toward Minorities, Teachers, and Poor People is Out of Control