As Rest of Nation Recovers, Homicides Spike in DC

As other cities saw a decline in previously surging murders, the nation's capital experienced a 36 percent increase in the rate of homicides in 2018.

Data from the Washington, D.C., metropolitan police revealed 160 murders happened in the city in 2018, a substantial increase from the 116 the preceding year. This increase came even as the city enjoyed a 7 percent overall drop in violent crime, including reductions in sex crimes, assault, and robbery.

The first days of 2019 show little sign of abatement. Five additional people were murdered over the first weekend of the year, WTOP reported, including a man and a woman killed in a house fire that police are investigating as a homicide.

This increase in homicides departs significantly from the trend in America's other major cities, including those known for their high homicide rates. The Brennan Center for Justice projected a 2.9 percent overall decline in the homicide rate in the nation's 30 largest cities, predicting a drop of as much as 25 percent in San Diego. 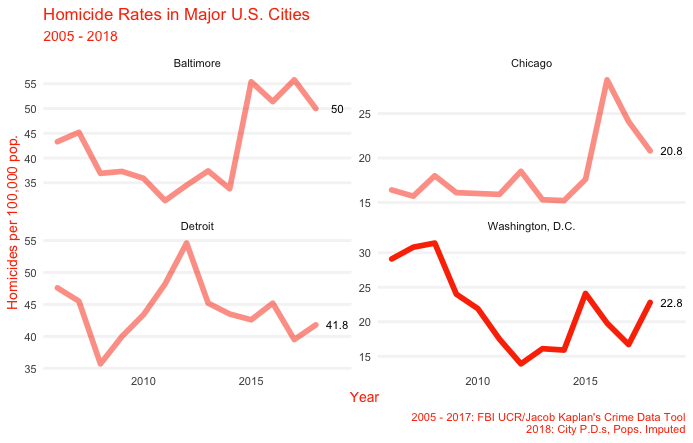 The same overall trend was apparent nationwide in 2017, the latest year for which data from the Federal Bureau of Investigation are available. In its 2017 Uniform Crime Report, the FBI indicated a 0.1 percent drop in the national homicide rate. This small drop was a significant victory compared to the preceding two years, which saw substantial increases.

In other words, as the rest of the nation returns to historically low homicide levels, D.C. becomes more and more apparently an outlier in the murder department.

The city, meanwhile, is struggling to fight back. There are 84 unsolved homicides from 2018, meaning that D.C. police cleared only 48 percent of the overall reported total. For comparison, the clearance rate for homicides in cities nationwide is about 60 percent.

Responding to the arrest of two homicide offenders in late December, D.C. Mayor Muriel Bowser pinned the blame for the District's spiking murder rate on "illegal firearms." The District seized 2,191 illegal firearms in 2017, as part of an aggressive program which has provoked complaints and lawsuits from residents who feel themselves over-targeted.

At the same time, other cities have been able to abate their surging murder rates, in spite of an influx of illegal guns. Chicago, which has long complained of an illegal gun issue, saw a two-year drop in homicides, a trend the city attributed to its use of better technology to track gun violence. Detroit's police chief—whose city has seen the homicide rate rose slightly in 2018 but overall trend downwards—attributes his relative success to Operation Ceasefire, "a partnership between law enforcement, city leaders, church leaders and community members that has seen success in curbing gang violence."

While the fundamental cause of the homicide spike remains unclear, who it affects does not. Murders in 2018 concentrated in Wards 7 and 8, situated across the Anacostia River on the Maryland border. Those two locales are D.C.'s poorest and blackest wards, home to massive poverty and inequality within line of sight of the nation's capitol.