FBI: Violent Crime Down Slightly in 2017

Americans committed about 1.2 million violent crimes in 2017, a rate of 382.9 per 100,000 people and modest dip from the year before, according to a report from the Federal Bureau of Investigation's Uniform Crime Reporting Program released on Monday.

Assaults accounted for the majority of violent crimes, about 65 percent; another 25 percent were attributable to robberies. In total, the number of murders and robberies fell slightly, while the number of rapes and aggravated assaults increased slightly. This adds up to crime figures largely unchanged as compared against 2016.

Homicides specifically fell by 0.1 murders per 100,000 people compared to 2016. The murder decline, criminologist John Pfaff noted on Twitter, concentrated in suburban and rural areas. Cities saw an increase in murders, while rates fell in outlying counties.

Justifiable homicides by private citizens, which the FBI defines as "the killing of a felon, during the commission of a felony," increased slightly to a five-year high. Of the 353 reported to the FBI, 299, or 84.7 percent, involved the use of firearms. Knives, hands and feet, and other dangerous weapons accounted for the other 54 justifiable homicides reported to the FBI.

Justifiable homicides by law enforcement, which the FBI defines as "the killing of a felon by a law enforcement officer in the line of duty," fell slightly to a five-year low. Of the 429 reported to the agency, 423, or 98.6 percent, of those incidents involved the use of firearms. Five involved other, unspecified, dangerous weapons. A single incident involved the use of a knife.

Attorney General Jeff Sessions said the Department of Justice has increased its efforts in prosecuting violent and gun crimes. He credited those efforts with having an effect on crime in the United States.

"In 2017, the Department of Justice brought cases against the greatest number of violent criminals in a quarter of a century—the most since we started keeping track," Sessions told the crowd gathered for the Department of Justice National Public Safety Partnership Symposium Monday morning. "It may even have been the most ever. We also charged the most federal firearm prosecutions in a decade. And we're not just putting people in jail for the sake of putting people in jail. The evidence is already starting to come in that our efforts are bearing fruit."

Sessions, who counts himself among that group, attributed the increases to the policies of the Obama administration and his predecessor, former Attorney General Eric Holder. Sessions has cited, for example, the wave of consent decrees issued by the Obama DOJ, which he claims handcuffed police and given cover to criminals.

Sessions previously took credit for a slight decline in violent crime in the first half of 2017, attributing it to a return to aggressive prosecution under his purview. Monday morning, Sessions heralded the new crime report, arguing that it made clear that his policies were succeeding.

Violent crime has been falling more or less continuously since the early 1990s, dropping almost 50 percent since its 1991 peak. However, that peak came at the end of a sustained, multi-decade boom in violence, and 2017 levels remain substantially elevated compared to the 1960s and even early 1970s. 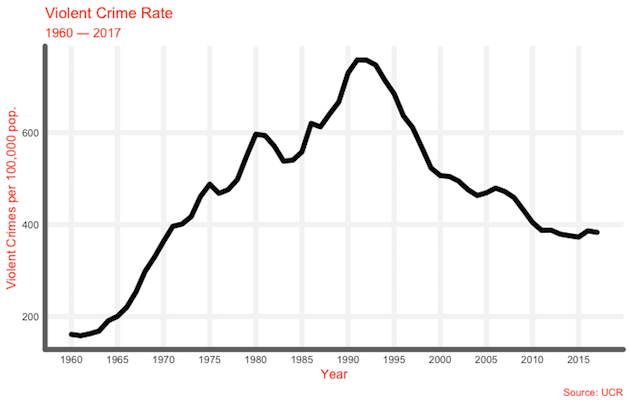 Explaining the last 25 years' "great American crime decline" is the most important question criminologists face today. Numerous theories have been advanced, ranging from studies finding that increases in the number of law enforcement officers reduce crime to the pop-criminology theory that ties the rise and fall of crime to atmospheric lead levels. In general, though, criminologists are not sure what explains either why crime fell from its 1990s peak, nor why it remains at an elevated level compared to the 1960s trough.

Perhaps the most interesting trend in the historical view of violent crime is the slowing of its decline over the past decade. While on net violent crime remains substantially below its peak two decades ago, the progress America has made towards further reducing it seems to have abated.

It is unclear what—if anything—policy makers can do to keep moving that line downwards.