It takes a lot to be a real American.

You can look the part, like Hulk Hogan, Kevin Costner in Yellowstone, or anyone who owns a Ford F-150. You can talk the talk, like Kid Rock, George W. Bush, or Larry the Cable Guy. But only real, true, honest-to-God Americans can walk the walk. Most men can’t walk the walk, even after a lifetime of breathing in that sweet, precious, musty American air. But for the rare few, the walk comes naturally.

Alfonzo worked his tail off to get to the United States. He left his native Venezuela in the heat of summer, and through a series of long bus rides and onerous walks, he made it to Texas. And, with President Joe Biden’s open border, who can blame Alfonzo for deserting his communist hellhole of a home in favor of the Lone Star State? We certainly can’t.

But Alfonzo never really set foot in Texas. The second he arrived, the Texans threw him on a bus, and three days later he was in New York City’s Port Authority. The liberals may call it a "sanctuary city" for illegal immigrants, but it didn’t feel like a sanctuary for Alfonzo. He had just $130 in his pocket, nowhere to go, and nothing to do. Surrounded by filth and homelessness, you have to imagine he was wondering whether it was all worth it.

But he was in the land of opportunity now, and opportunity immediately presented itself. Alfonzo was approached by a woman who wanted to spend the day with him.

That’s right. Merely five minutes after Alfonzo touched ground, a woman was asking him out on a date—and better yet, she was paying! Now sure, she was a reporter and was only taking Alfonzo out to interview him. And yes, through a translation app Alfonzo told the reporter that he was married and had kids. But she was also really nice to him. So when the reporter messaged Alfonzo to see whether he found a place to stay that night, our hero saw an opening.

He responded in the most American way possible. With a picture of his penis.

Alfonzo’s X-Rated Hail Mary didn’t work. The reporter—former Washington Free Beacon intern Emma-Jo Morris—is married, and Alfonzo isn’t exactly her type. But as any good reporter would, the Free Beacon-trained scribe wrote about her day with Alfonzo, ensuring that his ballsy move would live forever. The Free Beacon exclusively obtained the image, but we have opted to redact it for the safety of our readers.

Being an American is about taking risks and shooting your shot, even when the odds are stacked against you. Was it the safe play for George Washington to sneak across the Delaware on Christmas 1776? Nope. Did it take balls for Supreme Allied commander Dwight Eisenhower to storm Normandy in 1944? You’re damn right it did. Those men walked the walk and paved the road for Alfonzo to roll the dice in 2022.

And Morris says Alfonzo’s still trying, sending her pictures on the reg, including the below of Alfonzo wearing a shirt that says, "Love Needs No Translation." Alas, they just don’t see eye to eye. (Well, they kinda did.) 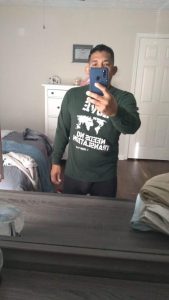 Who knows whether illegal immigrant Alfonzo will ever become an American citizen. Honestly, we hope he never does. But for taking an American risk on his first day in the United States and going out on his limb, we’re proud to call Alfonzo a Washington Free Beacon Man of the Year.