2017 Man of the Year: The Charging Bull of Wall Street

Imagine if you will, life as Wall Street's Charging Bull on the morning of March 7.

It's cold, a little breezy and damp. Not ideal weather, but nothing you haven't seen a million times before.

There you are in all your glory watching the sun come up over your domain.

The market, in the midst of an unprecedented rally has made you king of the concrete jungle once again.

Great, that is, until just in front of you a large windowless van backs up and plops down a new statue of a young Elizabeth Warren! 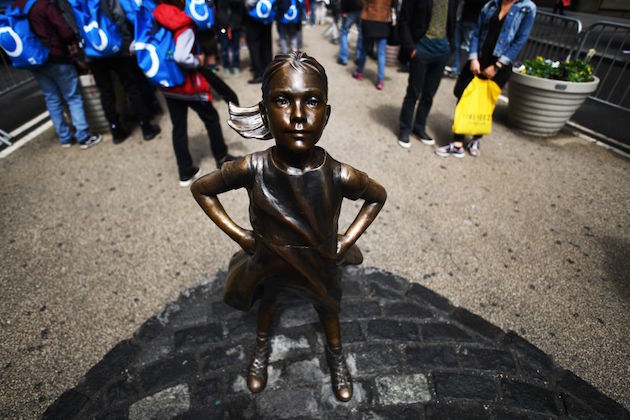 Why have you—the great bull of the American economy, the engine of prosperity charging forth like never before—been subjected to this insult? Apparently, you've been a bad boy. You're probably a little greedy, you're probably a misogynist, and now Little Lizzie, with hands on her hips is there to tell you that the next time you let a tourist rub your nuts, she'll be there file a sexual harassment suit against you.

You see, according to some woke asshat in the PR department of the $2.5 trillion asset management fund, State Street Global Advisors, you're the bad guy. You're the symbol of all evil in Trump's America—well other than Trump himself.

As the sun sets, you think to yourself that you haven't had a day this bad since a dreadlocked NYU student took a dump on your front hoof during Occupy Wall Street. Most of you quitters would sulk home, pack it in, give up the ghost.

But for our Charging Bull, you know what he did?

He looked Little Lizzie square in her smug face and charged straight into record books!

He led the DOW, the NASDAQ, the AMEX, and Bitcoin straight through the roof and made 2017 the single greatest year in the history of the American stock market. Take that Little Lizzie!

And take a bow Charging Bull, you're a Washington Free Beacon Man of The Year.