ANALYSIS: We Need a Total and Complete Shutdown of Rich White Liberals Having Children

Journalists continue to validate public's lack of trust in media

It's been a banner week for journalistic integrity.

A Gallup survey published last Thursday found that just 36 percent of Americans have at least "a fair amount" of trust in the media, the second-lowest figure in recorded history. As if on cue, America's élite journalists proceeded to validate the public's skepticism.

The same day the survey was published, the New York Times issued a lengthy correction to a story that had vastly overstated the number of U.S. children hospitalized with COVID-19, among other inaccuracies:

An earlier version of this article incorrectly described actions taken by regulators in Sweden and Denmark. They have halted use of the Moderna vaccine in children; they have not begun offering single doses. The article also misstated the number of Covid hospitalizations in U.S. children. It is more than 63,000 from August 2020 to October 2021, not 900,000 since the beginning of the pandemic. In addition, the article misstated the timing of an F.D.A. meeting on authorization of the Pfizer-BioNTech vaccine for children. It is later this month, not next week.

Apoorva Mandavilli, the reporter who wrote the story, earlier this year took charge of the paper's COVID-19 coverage after its senior science reporter, Donald McNeil, was pushed out for offending a rich teenager the Times had forced him to chaperone on a trip to Peru. Mandavilli, on the other hand, was not forced to resign after she suggested it was racist to believe that COVID-19 may have leaked from a Chinese lab.

Over the weekend, CNN senior media correspondent Brian Stelter performed a dramatic monologue in which he attempted to spin the atrocious Gallup figures into a diatribe against Fox News. "Whenever anyone asks me about trust in media, I try to ask, 'What do they mean by media?'" the journalist mused, thoughtfully. Maybe they just don't trust Fox News, whose viewers are uneducated idiots who have been brainwashed into hating "objective" networks like CNN?

Stelter insisted that CNN's commitment to reporting sets it apart from other, less trustworthy news sources. The day after Stelter's mournful soliloquy, for example, CNN aired a groundbreaking report on actor George Clooney, who had recently called former president Donald Trump a "knucklehead."

The day after that, Stelter attended the New York City première for the third season of HBO's Succession. He recounted the "splashy" affair, where celebrity guests downed "champagne and caviar," in his Reliable Sources newsletter.

"The best part of the première at the American Museum of Natural History was the musical surprise right after the screening: Two performers played the theme music and led a procession out of the theater," the journalist wrote. "An entire orchestra was assembled to continue the performance at the after-party."

Stelter wasn't the only élite journalist in attendance. CNN's Don Lemon and MSNBC's Ari Melber were also spotted on the red carpet. For Stelter, at least, the exclusive soirée was "one of those moments" that made him "feel like life is returning to a pre-Covid normal." Indeed, the pandemic has affected us all in different ways.

The Daily Mail on Wednesday published a damning report that suggested President Joe Biden could be ensnared in the FBI probe into the shady finances of his renegade son, Hunter Biden. Mainstream media outlets continue to ignore the mounting evidence of Hunter's blatant corruption, another aspect of their struggle to "speak truth to power" in the Biden era.

To its credit (sort of), Insider published an (egregiously caveated) story on Hunter's corruption. The headline demonstrates just how unwilling most journalists are to criticize or even investigate a prominent Democrat for sketchy behavior, lest they give Republicans and Fox News something to "pounce" on. 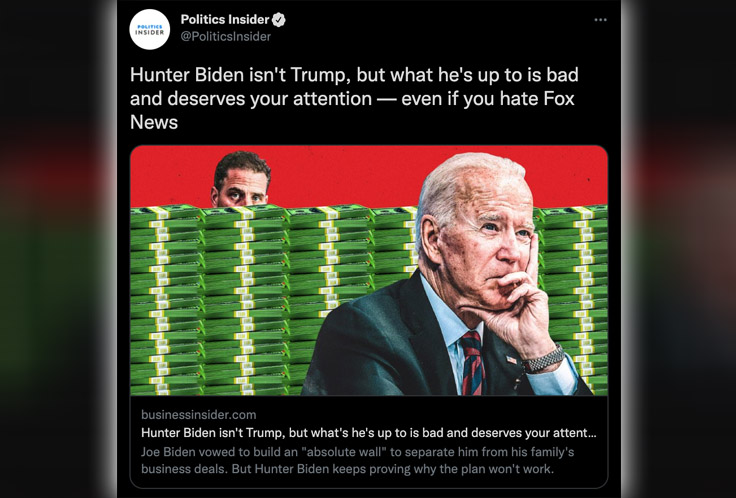 Then came the news that journalism icon Katie Couric withheld portions of her 2016 interview with Supreme Court justice Ruth Bader Ginsburg in an effort to "protect" the social justice hero from criticism. Over the objections of her boss at ABC News, Couric declined to air Ginsburg's description of black athletes who kneeled in protest during the national anthem as showing "contempt for a government that has made it possible for their parents and grandparents to live a decent life, which they probably could not have lived in the places they came from."

A self-described "big RBG fan," Couric deemed the comments "unworthy of a crusader for equality" and decided to omit them from the final edit of the interview. Couric was also criticized after the Washington Free Beacon reported she had deceptively edited an interview with gun-rights activists for the 2016 documentary, Under the Gun. The celebrity journalist currently serves as cochair of the Aspen Institute's commission on media disinformation.

Wednesday was an especially unfortunate day for fans of journalistic integrity. ESPN's Adam Schefter was widely condemned by professional journalists after emails revealed he prior to publication let an NFL executive review his story on the league's 2011 lockout. "Literally no one does this, this shit gets you fired anywhere else," wrote Washington Post reporter Tony Romm.

Wednesday was also the day CNN chief medical correspondent Sanjay Gupta appeared on Joe Rogan's podcast, where he eventually acknowledged that his network was wrong to suggest Rogan had taken "horse dewormer" to treat COVID-19. Rogan took the human version of the drug ivermectin, which was prescribed by his doctor. "They shouldn't have done that," Gupta conceded.

The CNN expert later that evening appeared on Don Lemon's show, where Lemon doubled down on his inaccurate description of Rogan's treatment. Critics were not impressed. "They said Rogan took horse dewormer. He didn't. And CNN and Don Lemon are such little people, with so little integrity, they can't admit they lied," wrote journalist Glenn Greenwald.

One might think this would be compelling material for Stelter to cover on his Sunday talk show, Reliable Sources, which purports to "examine the media world." Perhaps he could invite frequent guest Dan Rather on to discuss the public's lack of trust in media. Either way, the CNN host has a lot of airtime to fill these days now that Trump has been kicked off social media. Stelter's meticulous analysis of the former president's Twitter typos remains one of the most fearless acts of journalism in recent memory.

ANALYSIS: We Need a Total and Complete Shutdown of Rich White Liberals Having Children