A lawsuit filed last year by West Virginia's Republican attorney general Patrick Morrisey has resulted in a new Trump administration directive to evaluate the opioid production quota system, which Morrissey says is "responsible for many deaths across the country."

Morrisey, who has been attorney general since 2013 and is now running for U.S. Senate, has long viewed the Drug Enforcement Agency's quota system on controlled substances as broken, believing it was setting limits based on sales numbers instead of true medical needs of Americans. He told the Washington Free Beacon he has been digging for information on the system for years but was "stonewalled" by the Obama administration.

"We were looking for information on how the DEA put the quotas together," Morrisey explained. "Obama administration stonewalled us—they never worked with us or cooperated with us to provide us with what we need."

"We always believed that the drug quota system was a failure, we were trying to obtain documents to back that theory up," he said.

Morrisey charged in a December 2016 lawsuit that the DEA was allowing too much opioid production, but he put his lawsuit on hold Thursday after U.S. attorney general Jeff Sessions issued a brief directive to the DEA calling for it to quickly determine whether changes are needed in the quota system.

"We've put our lawsuit on hold because we know the Trump administration wants to do the right thing," he said. "We've been working with Jeff Sessions and the administration to identify the problems with the drug quota system, and we think yesterday's directive represents a major step forward."

For Morrisey, there is little doubt regarding the negative impact high drug quotas have had on his state, which has had one of the highest rates of drug overdose deaths, according to the CDC.

He called the failure by the DEA to address the problem an "abdication of responsibility by people in the government who were charged with protecting our citizens."

"There are many causes for the deaths that occurred across the country and the spiraling out of control supply that landed across our nation, but the drug quota failure has to be included in that list," he said.

"The law requires them to establish accurate numbers based on need not want," he said. "They did not follow the law."

Data tables published annually by the DEA illustrate how the agency allowed the supply of opioids to spike even as the epidemic became more deadly.

Morrisey criticized Sen. Joe Manchin (D., W.Va.) as "part of the problem" and said he "bears some responsibility for the explosion of pills" in the state.

"When Manchin was governor he did nothing meaningful to address the substance abuse epidemic," he said. "He has only now found religion on the issue because he's running for reelection, but we've been working on this since day one."

He said he will continue to take steps to address the drug epidemic no matter what position he holds in the future.

"I'm going to keep doing my job—whether I'm the attorney general or the next U.S. senator—I'm going to continue winning significant matters for West Virginia to reduce the excess of opiate supply," he said. "A lot of politicians talk about things, we take action."

DEA Seizes 1.5 Tons of Meth in Second-Largest Bust Ever 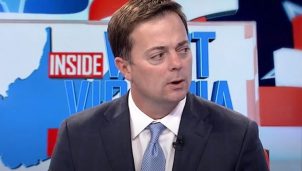