Presidential candidate Tom Steyer has sung the praises of public schools and opposes spending tax dollars on private ones, even though records show he paid for his children to have a $50,000-per-year education.

During a Tuesday morning appearance on C-SPAN's Washington Journal, Steyer told a caller he believes that "quality public education from universal preschool through college" is "an absolute obligation of the government and a right for every American" and that "having a quality public education is the only way we can have justice and mobility in our society." Steyer has promised to put government money where his mouth is, telling the Washington Post that he "does not support using public money for private or religious education."

In doing so, Steyer would deny parents of lesser means the ability to do as he did when he sent his children to the San Francisco University High School, whose annual tuition costs $49,496. The apparent hypocrisy is yet another way that Steyer—a hedge-fund billionaire who now campaigns against both wealth inequality and the fossil fuels from which he is not fully divested—has used his wealth in apparent contradiction to his political views. At the same time, it recalls Steyer's opponents' own dishonesty on the topic, particularly Sen. Elizabeth Warren's (D., Mass.).

The Steyer campaign did not respond to a request for comment.

Records indicate that Steyer's four children—all of whom are now adults—attended San Francisco University High School as adolescents. His son Sam was a member of the class of 2006, while Gus Steyer was in the class of 2008. His daughter Evi appears to have graduated in 2009, while Henry Steyer's page on Harvard's official athletics website notes his high school without specifying his graduation year.

According to tax forms obtained by ProPublica, the school took in $26.5 million of revenue in 2017 and claims to hold $77 million in assets. It sprawls across four buildings, boasting amenities including science laboratories, a student center, and a 400-seat theater. It has a six-to-one student to teacher ratio, the same as Harvard University.

Such quality vastly overshadows the San Francisco public school system in which the Steyer children might otherwise have been enrolled. As of 2018, only 55 percent of 11th graders were English language proficient, while just 31 percent were math proficient.

Tommy Schultz, vice president of communications and marketing for the pro-voucher group the American Federation for Children, told the Washington Free Beacon that Steyer's hypocrisy was a blow to his progressive bona fides and a black mark on all the candidates who had done likewise.

"It's far from progressive to exercise school choice for your own politically powerful families while fighting against extending those options to poor families who desperately need educational options," Schultz said. "It's simply the height of hypocrisy, and it's astounding how callous it is for these candidates to openly broadcast that they want to remove a lower-income kid from a school that their family has chosen and to send that kid back to a district public school that their family left because it wasn't working for them."

While Steyer may not like vouchers, parents without his wealth do. Polling from EducationNext, a pro-school-reform journal, found that 62 percent of parents support permitting children to be enrolled in private schools "with government helping to pay the tuition." Sixty-two percent of black and Hispanic respondents to EducationNext‘s poll said the same thing. Another poll, conducted by researchers at Penn, found higher support for vouchers among respondents making less than $30,000 per year than among those making $30,000 to $100,000.

Steyer is not the only 2020 contender to oppose private education while taking advantage of it himself. As the Washington Free Beacon previously reported, Elizabeth Warren sent her son to "one of the nation's most elite private schools," a fact that Warren later lied to voters about. Other 2020 contenders have also been critical of private education in spite of attending or sending their children to private schools, including former vice president Joe Biden and former mayor Pete Buttigieg. 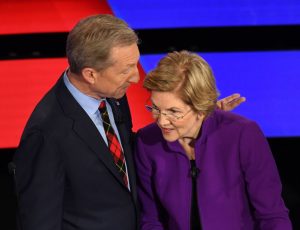