The Media Research Center, a conservative nonprofit, said between October 2 and October 8, ABC, NBC, and CBS's news programs spent 30 minutes and 17 seconds arguing in favor of more gun control while only 6 minutes and 27 seconds were dedicated to support for gun rights. The report, authored by Deputy Research Director Geoffrey Dickens and published on the group's NewsBusters website, examined all statements from anchors, reporters, guests, and soundbites that took a position on gun control or gun rights.

"In the aftermath of the Las Vegas shooting massacre, the Big Three (ABC, CBS, NBC) networks wasted little time in exploiting the tragedy to advance their anti-gun rights agenda," Dickens wrote. "In just six days (October 2 through October 8) of coverage, the networks filled their evening and morning show programs with statements favoring gun control over gun rights by a ratio of roughly 5 to 1." 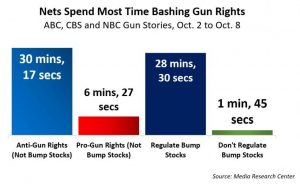 The report singled out comments from former NBC Nightly News anchor Tom Brokaw on October 3's Today Show as an example of some of the sentiments being broadcast on major media.

"I would say to this audience, and any audience before which I appear these days, we are where we are because of the power of people who wanted these kinds of guns," Brokaw said. "And the NRA managed to organize them and get them as a political force in America. So, the question is, if you’re not happy with what has happened, your individual obligation as citizen is to organize on the other side."

Additionally, the three networks also spent 28 minutes and 30 seconds specifically covering regulation of bump-fire stocks—the device used by the Las Vegas shooter to increase his rate of fire. The report said the thrust of the coverage favored new restrictions on the devices. In comparison, the networks spent 1 minute and 45 seconds airing the views of those opposed to new gun regulations, including those on bump-fire stocks.

The report noted there were examples of gun-rights support being highlighted by the network news programs but not at nearly the rate of support for new gun-control measures.