Despite some of the nation's toughest laws, the number of gun owners in California has more than doubled over the past ten years, according to new data released Friday by the state Department of Justice.

The state of California maintains a one-of-a-kind database of known gun owners, the Armed and Prohibited Persons System (APPS). APPS combines data on firearm transactions from two different state sources, the Dealer Record of Sale (DROS) database which tracks all transfers made by gun dealers and the Automated Firearms System (AFS) which includes the subset of guns the state requires to be registered, to compile a list of all individuals who legally purchased or were transferred a firearm in California.

Operated continuously since 2006, the program's goal is to identify and seize the weapons of individuals prohibited from owning a gun under state law.

What those data show is that, as of 2019, there are more than 2.5 million gun owners in California, compared to fewer than a million in 2008. That figure translates to about 8 percent of Californian adults owning guns, compared to 3.4 percent in 2008—a more than two-fold increase, even when adjusting for population. 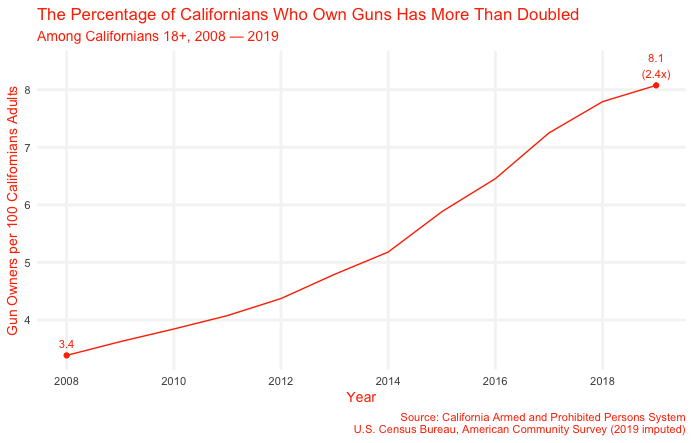 It is likely that this figure actually undercounts the total number of gun owners in California. The APPS tracks ownership in large part on the basis of annual sales recorded in the California DROS database—full figures for which are only available dating to the 1990s—and does not necessarily include all private sales.

It is possible that the increase above reflects an increase in effectiveness of surveillance by the California DOJ, meaning that it may not reflect an increase in the real population of gun owners. However, there is reason to think otherwise: Data from the DROS database indicate a substantial increase in the total number of annual gun sales, tracking the trend in gun owners. 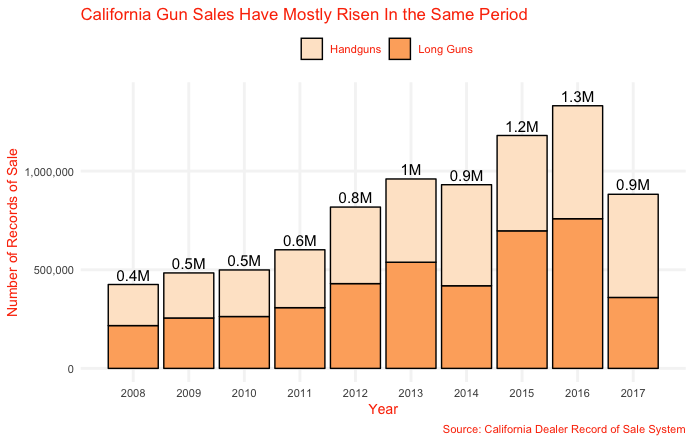 The overall increase in ownership is surprising for two reasons. Firstly, it shows a steady increase in gun ownership even as California is widely regarded to have some of the toughest gun laws in the nation. Laws prohibit ownership of essentially all "assault weapons," ban the sale of many popular handguns, require owners to take a written test to receive a license to purchase a gun, and permit police to deny a concealed carry permit at their discretion. 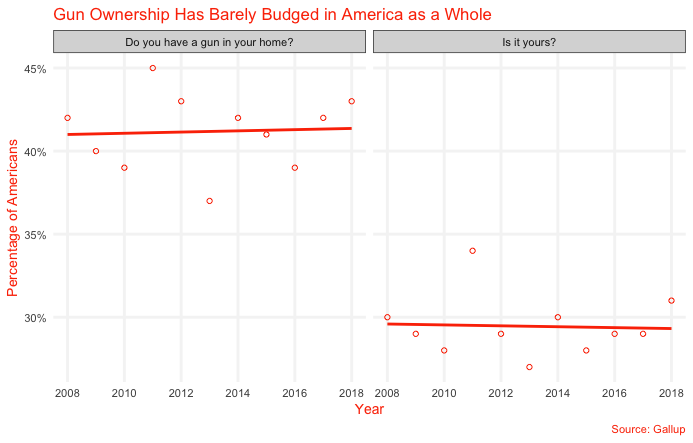 Data from other, less frequently administered surveys show similar trends: An NBC/Wall Street Journal poll has consistently found between 40 and 50 percent of Americans have a gun in the home, while the General Social Survey indicates the proportion of gun owners actually decreased between 2008 and 2016.

These findings indicate the challenges of accurately measuring the number of gun owners in America. Since a national registry of guns is illegal under federal law and strongly opposed by many in the gun community, a perfect measure of gun ownership is impossible. California's data collection, while imperfect and likely incomplete, offers a relatively unique insight into gun ownership since it is more expansive than most states.

It is unclear exactly why California has seen a large increase in gun ownership over the past decade but David Yamane, a professor of sociology at Wake Forest University who studies gun culture, told the Washington Free Beacon that while some of the increase is likely "artifactual," it's also likely the data undercounts gun ownership.

"The restrictive nature of gun laws and political culture of California, especially in the most populated areas, makes a low estimate realistic, but 8% is well below survey-based estimates of around 15% that I have seen," he said. "And I would take any survey-based estimate as a minimum so the gun ownership rate is probably even higher then these government numbers say. So, this makes the situation confounding because you have a dramatic increase in the known gun ownership rate and yet even at the end of that increase at probably still under estimates actual gun ownership in California."

Yamane said the increase is likely the result of both political considerations and personal safety concerns.

"Obama has been hailed as the greatest gun salesman in history, and surely some of those acquiring firearms for the first time did so during this time," Yaman said. "We also know that mass public shootings increase interest in gun ownership and since 2008 there have been some of the most high-profile mass shootings in American history, including one in San Bernardino. That would stimulate new gun ownership during this time period."

"So, the bottom line is that part of the increase is no doubt real and part of it is artifactual but there is no way of determining how much of it falls in which category," he said.

Leaders of the gun community within California pointed to several different motivating factors to explain the increase in gun ownership.

The National Rifle Association said many of the sales were likely a reaction to the numerous gun restrictions passed in the state over the last decade or in fear of even more new restrictions and bans.

"It’s no secret that the state legislature in California is hostile to the Second Amendment and that, year after year, anti-gun lawmakers pass increasingly egregious legislation that targets law-abiding gun owners," Amy Hunter, a spokesperson for the NRA's Institute for Legislative Action, told the Free Beacon. "People react when their rights are threatened, and it’s no surprise that many Californians are buying firearms because they’re worried their lawmakers will soon ban them. The NRA fights for Californians’ rights every day, and we are currently supporting litigation to restore rights in California."

"I think this just goes along with an overall increase in gun ownership," she told the Free Beacon. "I think the restrictions may, in fact, be part of it. I think people have been concerned about losing their rights.

"I think it shows that if the state is using background checks to discourage interest in the shooting sports, it's not working."