"The Bedouin need to understand that we live in a country of law," said Yoav Galant, minister of construction and housing, on Wednesday, sending a warning shot across the bow of local leaders in an otherwise festive occasion to celebrate the opening of the first-ever Bedouin country club in the city of Rahat in the Negev. "Whoever resides legally can enjoy this country club, public and cultural institutions, and everything else we at the office of construction and housing build," he said.

The problem is that illegal Bedouin encampments stretch for miles across the Negev. There are 64,000 illegal structures with 2,000 new ones added each year. In 2012, Israel established a special police division to deal with the problem. Their demolitions can't keep up with construction.

"It really is a question of sovereignty," said Naomi Kahn, director of the international division of Regavim, an Israeli organization focusing on land issues. "Israel may be powerful but it's hesitant to use that power." She cites as an example Route 6, one of the country's main arteries, which ends abruptly in the Negev because Bedouin have camped out on its planned route. As a result, there's a large military complex in the south without a major road or train to service it, she says.

Regavim estimates that only a fraction of the Negev's Bedouin, or 55,000 people, actually live in these illegal settlement clusters, equivalent to one-sixth of one percent of Israel's population. 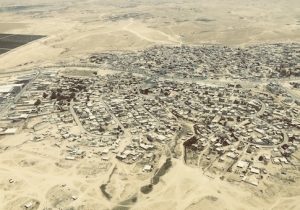 Yet, they take up over 520,000 dunams, or some 130,000 acres. "These facts are almost impossible to grasp, especially when compared to the total area of land available for civilian use in Israel, some 11 million dunams," a Regavim report notes.

Senior statesmen have drawn attention to the problem for decades. Committees have been established, plans formed, reports issued. Yet successive Israeli governments have failed to act, making the problem two-fold—not only are the Bedouin uninterested in obeying Israel's land laws, but the state appears impotent in enforcing them.

Israel's hesitancy is driven, at least in part, by the specter of international opprobrium. The optics of Israeli police uprooting Bedouin from their homes—no matter how lawful the action—is something the government wants to avoid. "The problem isn't so much the opposition of the Bedouin. It's the left-wing groups who will bring all the opposition from Europe—ambassadors and all sorts of parliament members—and say, ‘Look what Israel does here,'" said Amichai Yogev, Regavim's director of operations for the southern region.

There are signs things might be changing. On Tuesday, the Beer Sheva District Court rejected an appeal concerning Al Arakib, an illegal Bedouin settlement built and rebuilt more than 100 times. The Bedouin invented a false narrative that the settlement was "ancient" when satellite photos clearly showed it was of recent provenance. Even Israel's Supreme Court rejected the Bedouin claim in 2015. The Beer Sheva District Court's decision finally brings the matter to an end.

Last year, the government agreed to invest 3 billion shekels—roughly $800 million—over five years into improving the Bedouin community. The money will go toward building new residences, education, industrial zones, job training, and strengthening public services. The plan notes there are 1,680 illegal Bedouin residential clusters and provides a solution for 873 of them. Minister of Agriculture Uri Ariel's office, which is responsible for implementing the plan, would not comment on the remaining 817. This might partly explain a public spat that erupted between Minister Ariel and Knesset Member Bezalel Smotrich (who had co-founded Regavim) of the Jewish Home Party. Ariel's plan apparently allows the Bedouin to stay on some of the land they've illegally taken.

"There is no logic or justification in transferring nearly 200,000 dunams, or even half that, to private Bedouin hands," Smotrich told Israeli newspaper Makor Rishon in May.

In April, Israelis didn't need to visit the south to understand something was very wrong in the Negev. A video showing Bedouin driving wildly on Route 40 near Beer Sheva and firing machine guns in the air shocked the nation, particularly as law-abiding Israelis have difficulty obtaining even a handgun. It turned out that such events—the shooters were celebrating a wedding—are commonplace, and that Jewish residents of the south regularly find bullet holes in their homes. Bedouin pay the steepest price for such behavior. Over 1,000 have been injured from stray rounds, some ending up in wheelchairs. For a time, debate about the video filled the airwaves, with conversations often turning to the question of Israeli sovereignty, specifically the lack thereof.

In June, the news daily Israel Hayom ran a three-page spread on Bedouin crime in the Negev titled "The Wild South." It revealed that every single gas station in Beer Sheva, the largest city of the region, had been robbed, most of them more than once. Not just gas stations but 24-hour service stores had been hit. Although the problem began around 2009 and the level of violence connected with the robberies has increased, store owners say the police and the municipality seem unable to help. "No question the Bedouin have become more brazen, encouraged by Israel's failure of enforcement," Kahn said.

"Failure of enforcement" extends beyond real estate and crime. Polygamy is rampant among the Bedouin, although it has been illegal in Israel since 1977. "It's a societal problem," said Arik Rudnitzky, project manager of Tel Aviv University's Konrad Adenauer Program for Jewish-Arab Cooperation. In a 2012 study, Rudnitzky reported that 30 percent or "practically every third Bedouin man has at least two wives." "There was even a Knesset member with two wives," he said.

Polygamy is the key reason the Bedouin have spread so quickly. "They have the fastest growth rate in the world," Rudnitzky said. Indeed, polygamy's purpose is to increase population—having many children is traditionally a way for Bedouin clans to increase their numbers and strengthen themselves against potential threats, he noted.

More than ignoring Bedouin polygamy, the state subsidizes it. The National Insurance Institute actually has a classification for polygamous families, or "enlarged families" in NII's terminology, and provides benefits to "additional wives." It paid benefits to 968 such women in 2012. It may be just the tip of the iceberg. Mordechai Kedar, a senior lecturer in the Department of Arabic at Bar-Ilan University, says many "additional" Bedouin wives receive benefits as single mothers. "Second and third wives of the Bedouin usually aren't registered in Israel. So they receive a chunk of money from the state. There's a children's allowance. There's a mother's allowance. It adds up to thousands of shekels a month," he said. His solution is simple. "The only thing that can work is stopping the money. Anyone who brings a wife should pay for it, not the country. This will stop polygamists."

An unwelcome side-effect of polygamy is Islamic radicalization. Bedouin men bring in wives from the West Bank and Gaza. These women have gone through the Palestinian education system where they became radicalized. They impart their anti-Semitic, anti-Israel worldview to their children. The percentage of Bedouin who serve in the army is minimal. Kahn puts it at 1 percent. "It didn't use to be like that," she says.

Perhaps a more serious impetus for radicalization is the Islamic Movement. An extremist group that started in the north of Israel, the Movement's domed mosques can be seen in the larger Bedouin towns. 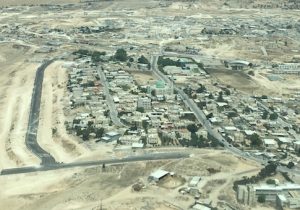 Its influence is also apparent in newer Bedouin homes where large tile plaques are placed above the front doors featuring a painting of Jerusalem's Dome of the Rock. It's a worrisome trend, Kedar says, citing the example of Othman Abdal-Kiana, a promising Bedouin surgeon who worked for Barzilai Medical Center in Ashkelon. "He became radicalized and one day in 2014 he went and joined ISIS. He was killed in Syria," Kedar said.

Traditionally, Bedouin were not extremist and their knowledge of Islam shallow. "Their tribal lifestyle set them against radical Islam. Radical Islam tries to erase the familial hierarchy, replacing it with a religious hierarchy," he said. But the process of urbanization led to a breakdown within Bedouin culture, "pushing some of them into the bosom of the Islamic movement, which provides an alternative to the disintegrating tribal culture."

The combination of lawlessness, rapid growth, and radicalization combine to form Regavim's worst-case scenario, in which a large, fiercely Islamic population identifies more with the Palestinians than with the State of Israel. "Essentially you will lose the Negev," Kahn said.

"Every five kilometers or so you see a structure. In another 50-to-70 years it will be filled. It'll be impossible to think of evacuating it," Regavim's Yogev agrees. "It'll be a little Gaza. To connect it to the real Gaza won't be a problem. Gaza isn't that far—a small strip will connect it."

Minister of Construction Galant appears to share this view. A year and a half ago he proposed building five new settlements in the Negev to strengthen the Jewish presence there. Galant's plan was reminiscent of one proposed by then-agricultural minister Ariel Sharon in July 1980, who warned the Knesset Foreign Affairs Committee that five new settlements would need to be set up to prevent Bedouin intrusion into state lands and block Arab continuity between the West Bank and Gaza.

Even though Galant's plan was approved by the Israeli cabinet, it was delayed for bureaucratic reasons. In response, Galant doubled down and in June announced a plan for 18 new settlements instead of five. He made his motivation clear during a Knesset committee meeting to discuss the plan. "The illegal takeover of the Bedouin is eroding Zionist sovereignty in the Negev," he said. "The Negev constitutes half the territory of the State of Israel. Today, it's in danger and there is a real fear of a hostile takeover. Illegal construction by the Bedouin in the Negev and Beer Sheva area in recent years has spun out of control."

In 1955, Israel's first prime minister David Ben-Gurion said the Negev would be "the test of the nation of Israel." His intention was to encourage Jews to settle the Negev. He probably didn't foresee they would need to compete with the Bedouin. As a result of that competition, his words ring truer today than ever.