I Legally Carried a Gun at the NRA Annual Meeting

Feature: Please stop writing stories about how guns are banned at the NRA convention

Last week the National Rifle Association had its 147th annual meeting in Dallas, and I legally carried my gun throughout the event.

This shouldn't be particularly newsworthy since everything I did was perfectly legal—I never had to draw my firearm, and there were likely hundreds or thousands of other people there carrying guns. So many major media outlets, however, misreported the rules for gun carry at the convention that I felt compelled to set the record straight not just by words but by deeds. So, that's exactly what I did.

Some outlets were so far off that they claimed the NRA had banned guns at their convention. "NRA faces backlash for banning guns at NRA convention," The Hill initially wrote. That, of course, wasn't remotely true.

Here are some pictures of me with a Springfield XDs 4.0 in 9mm tucked comfortably under my shirt in the press room and on the exhibit floor, for good measure.

I carried my gun at the convention on Thursday, Friday, and Saturday. The NRA had no policy against this whatsoever, even on the day that President Trump and Vice President Pence spoke at the convention. That might surprise you as a flood of media reports outright said they did. 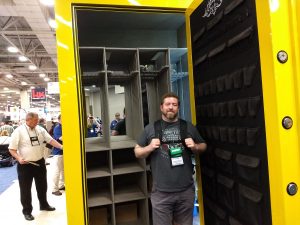 The reality is that the vast majority of the 2,000,000-square-foot Kay Baily Hutchison Convention Center was still accessible to me on the day of Trump and Pence's speeches—even during their speeches. The arena where the two spoke was the only area off-limits to civilians carrying guns. It wasn't, however, the NRA making the call on that policy, despite the media claims. It was the Secret Service.

Even after the facts were finally established and the Associated Press issued a correction, some still saw this as a sort of hypocrisy on the part of the NRA or concealed carriers. This stems from, the best that I can tell, a complete misunderstanding of the concealed-carry mindset. The idea isn't that permittees should be able to carry guns literally everywhere. That's simply not what concealed carriers want.

The idea is that those with permits should be able to legally carry guns in places with little or no security. And, no, most don't consider a sign with a red X over a gun to be real security. A team of highly trained and well-armed Secret Service agents that individually screens everyone allowed inside of a pre-screened perimeter fit the bill. Every concealed carrier I know would be fine with that trade-off, and I didn't see any opposition to it at the arena either.

So, anyway, if we could not repeat this particular media myth for next year's annual meeting, that would be nice. I would prefer not to have to write this piece every year for the rest of my life like Sisyphus but with a 9mm on his hip.