The number of cases before federal immigration courts continues to rise, a new report shows, despite efforts by the Trump administration to reduce the backlog.

There were 714,067 cases awaiting judgement as of May 2018, the Transactional Records Access Clearinghouse (TRAC) reported, the highest level since at least 1998. The backlog has risen by 32 percent since President Donald Trump took office in January of 2017. 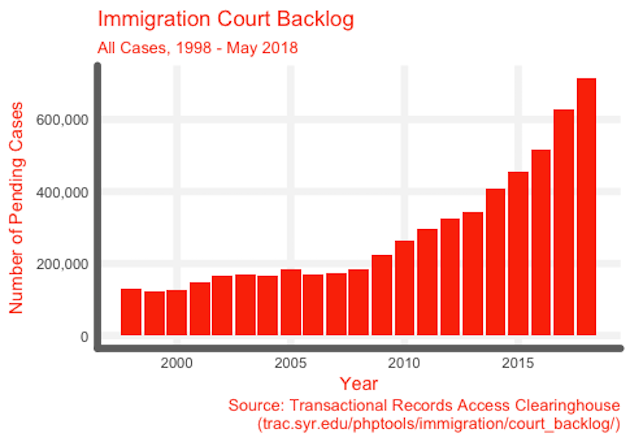 This growth in backlog puts a damper on the announcement issued by Attorney General Jeff Sessions in October that a surge of immigration judges had increased the number of cases being processed by immigration courts. That surge, initially ordered by President Trump in January, was responsible for an additional 2,700 immigration cases being addressed, according to analysis from the Executive Office for Immigration Review. Sessions also recently announced the appointment of an additional 35 immigration prosecutors, part of a rollout of new Assistant U.S. Attorneys, in order to cut the backlog.

TRAC notes that while DOJ has "implemented a number of new policies with the announced aim of speeding case dispositions, their efforts thus far have not had the desired result and appear to have actually lengthened completion times so that these have risen to new all-time highs." In other words: while DOJ's new immigration judges may have reduced the overall caseload marginally, the rate at which the backlog continues to grow has offset that gain.

The reason for this continued growth is not because there are more cases, TRAC reported. Rather, it's because current cases are taking longer to clear once filed. Cases that result in a removal order are now taking an average of 501 days to process, as compared to an average of 392 days in 2017. Decisions granting some form of relief from deportation, including asylum decisions, took an average of 1,064 days in 2018, a 17 percent increase from 2017. 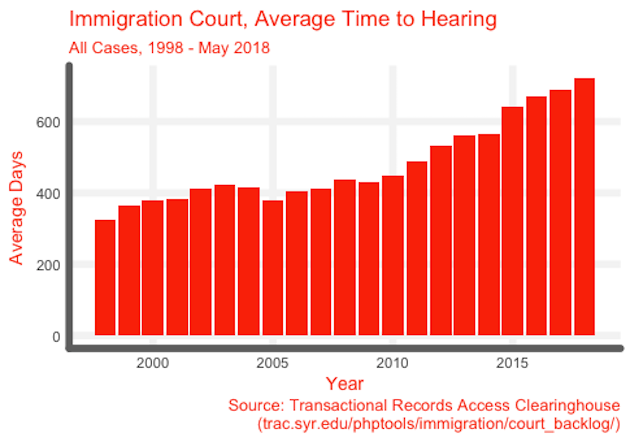 This latest report contributes further uncertainty to the Trump administration's current offensive in the fight to curb illegal immigration. Despite an increase in border prosecutions—part of Sessions's new "zero-tolerance" policy—the number of individuals apprehended at the southwestern border remained above 50,000 in May, a substantial increase as compared to the same month in 2017.