Hollywood celebrities young and old have come out in condemnation of Israel since the beginning of hostilities with Hamas in Gaza.

Opponents of Israel have not been shy about making their thoughts known, whether it be through social media or letters denouncing Israel. Some have just cluelessly tweeted themselves onto team Hamas, and then rushed to clarify that they had no idea what they were talking about.

Here are some of the celebrities that have found themselves on the side of Hamas: 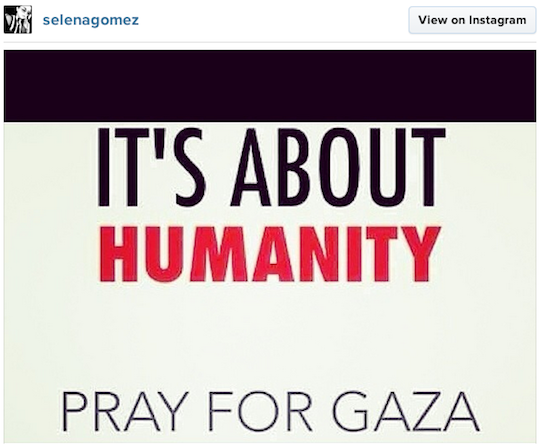 Gomez posted again on her Instagram account after hours of criticism and hundreds of thousands of likes and comments that she was 'not picking any sides."

The Counselor stars Javier Bardem and Penelope Cruz penned a letter calling for the end of 'the genocide perpetrated by the Israeli occupation army in the Gaza strip against Palestinian civilians."

The couple called for the European Union to condemn Israel for 'the bombing by land, sea and air against the Palestinian civilian population in the Gaza Strip."

Despite accusing Israel of carrying out genocide, Bardem and Cruz now say that they were misunderstood and actually 'have great respect for the people of Israel" and that their letter 'was solely meant as a plea for peace."

The one-time singer for Pink Floyd and long-time critic of Israel is back at it, calling for 'artists all over the world" to join him and 'oppose The Israeli Government’s brutal policies."

His appeal was directed towards rocker Neil Young, who was scheduled to perform in Tel Aviv on July 17, an action Waters characterized as supporting 'colonial apartheid regime" of Israel.

Luckily, his appeals fell on deaf ears, as they have in the past. Young canceled the concert due to fears that his crowd would be in range of Hamas rocket fire coming from Gaza, but pledged to return once things have calmed down. 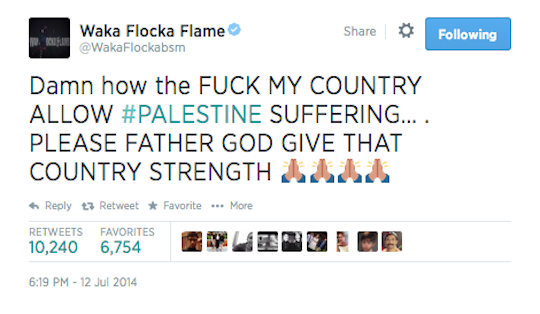 Rapper Waka Flocka Flame voiced disbelief that the United States was letting Israel carry out its operations in Gaza.

The tweet drew love and admiration from his fans—it was retweeted more than 10,000 times and drew comments such as '#FuckIsrael" and 'you’re amazing."

Actor Mark Ruffalo, best known for his roles in Mirror, Mirror 2: Raven Dance and Mirror, Mirror III: The Voyeur, has yet to grasp the Hamas tactic of running its military operations out of Gaza hospitals.

Ruffalo, responding to critics on Twitter, said, 'Sorry, I thought blowing up Hospitals was something that all human beings could agree was off limits."

When Twitter user Shari Lane enlightened the 13 Going on 30 star that Hamas has been using children as human shields during the conflict, Ruffalo responded with disbelief.

'Do you honestly think these people, these fellow human beings, would use their own children as shields? Use your heart," pleaded Ruffalo.