Hillary Clinton on Monday worked to convince attendees at the American Israel Public Affairs Committee policy conference that she would be a pro-Israel president if elected in 2016. Just outside, the son of her long-time adviser Sidney Blumenthal led anti-Israel protests outside the conference.

Max Blumenthal was seen tussling with pro-Israel attendees of the Washington, D.C., conference throughout the day on Sunday. Blumenthal got into a verbal dispute with Rabbi Shmuley Boteach that was captured on video.

Blumenthal was quite proud of the altercation, retweeting a short clip of the argument posted by somebody who thought that "Max [gave] it to" Boteach.

4 those who do not have FB
Racist @RabbiShmuley Calls @MaxBlumenthal who's Jewish an Antisemite. Max gives it to him pic.twitter.com/aK9teOuDu3

The younger Blumenthal has been an outspoken critic of Israel who has compared the Jewish state to Nazi Germany in his books. Blumenthal’s books are widely criticized as propaganda, and The Nation wrote that his latest, Goliath, "could have been published by the Hamas Book-of-the-Month Club."

Clinton praised Blumenthal's first book, Republican Gomorrah. In emails with Sidney Blumenthal that were sent during her time at the State Department she wrote that she "just finished the book and it’s great." She followed up days later to inquire whether the book was "still rising up the best seller list."

Sidney Blumenthal has been an adviser to both Hillary Clinton and her husband. Although he had no official position in Clinton's State Department, emails show that Clinton often sought his advice.

One issue that Sidney Blumenthal was always willing to give advice on was Israel. In advance of Clinton’s 2010 speech to AIPAC, Blumenthal sent a memo urging her to use the speech to badmouth Israeli Prime Minister Benjamin Netanyahu and to tell AIPAC that "it does not have a monopoly over American Jewish opinion."

Pro-Israel groups have asked Clinton to disavow Sidney Blumenthal over his anti-Israel views.

Over the weekend, the rabbi who tussled with Max Blumenthal published a full-page ad in the New York Times criticizing Clinton for her comments praising Max and urging her to "dissociate herself from her discredited adviser Sidney Blumenthal and his rabid, Israel-hating son Max." 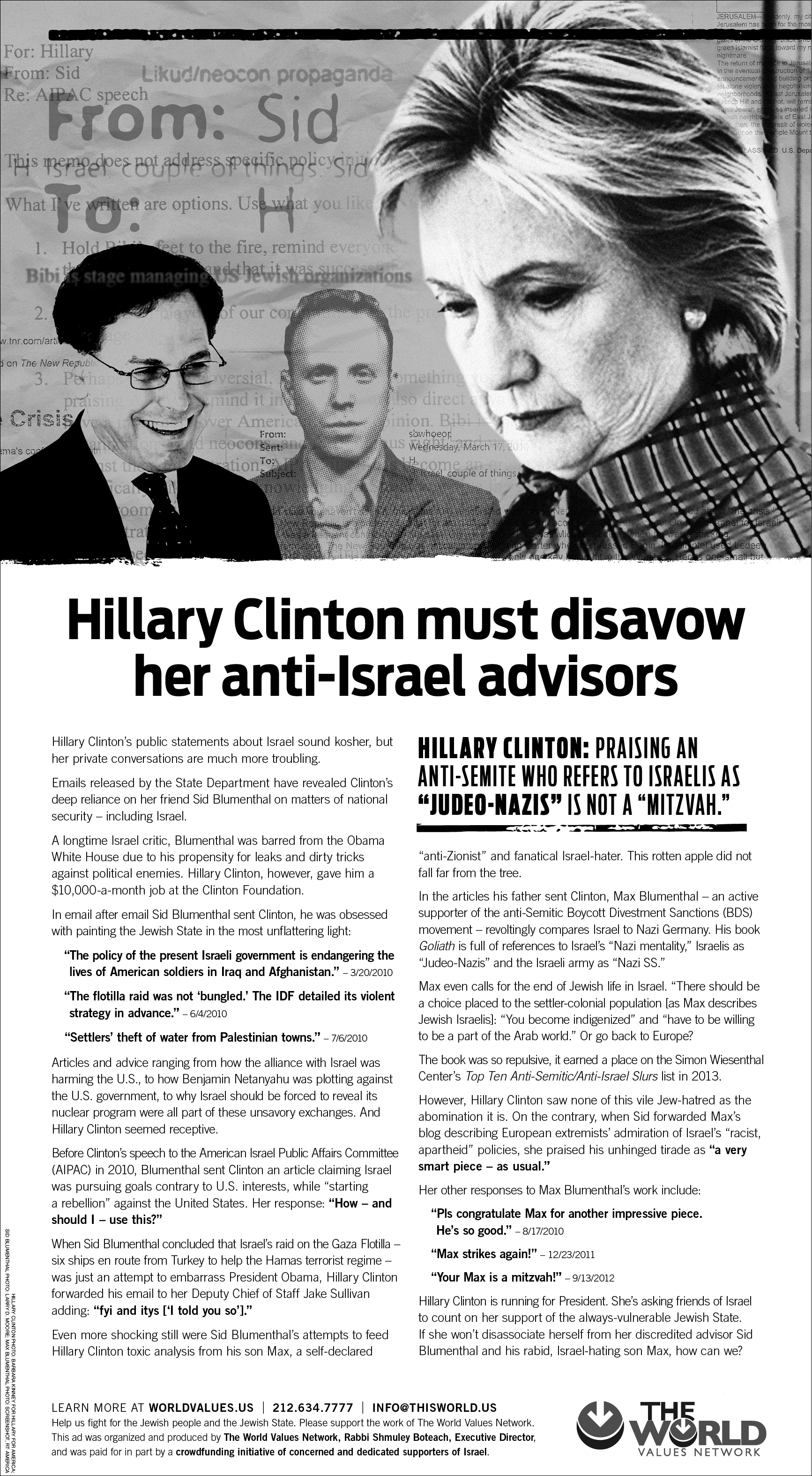 Clinton has previously defended her ties to Blumenthal.

When asked last year why she was going to Blumenthal for advice when he had no official position in the administration, she said "I’m going to keep talking to my old friends whoever they are."