America Is in a Polydrug Crisis, New CDC Data Confirm

The United States is facing a drug overdose epidemic driven by methamphetamine, cocaine, and synthetic opioids, data released Thursday by the Centers for Disease Control confirm.

The new statistics, released as part of the CDC's final report on deaths in 2018, offer an initially bright picture, showing that a slight decline in drug overdose death rates has resulted in an end to America's three-year life expectancy drop. But a closer look reveals that this seeming respite masks alarming rises in deaths associated with a plurality of drugs, signifying an ongoing shift in the nature of the drug crisis.

This shift is likely to have important ramifications for policymakers, who must move their attention from domestically produced prescription opioids to foreign-sourced narcotics and stimulants. Whether such a move happens, however, is contingent on lawmakers' priorities, and whether they can recognize threats from China and Mexico as readily as they have been able to recognize those from the pharmaceutical industry.

The numbers released Thursday confirm the preliminary figures released by the CDC in July. In the aggregate, the rate of drug overdose deaths fell by roughly 5 percent, from 21.6 per 100,000 people in the population to 20.7. 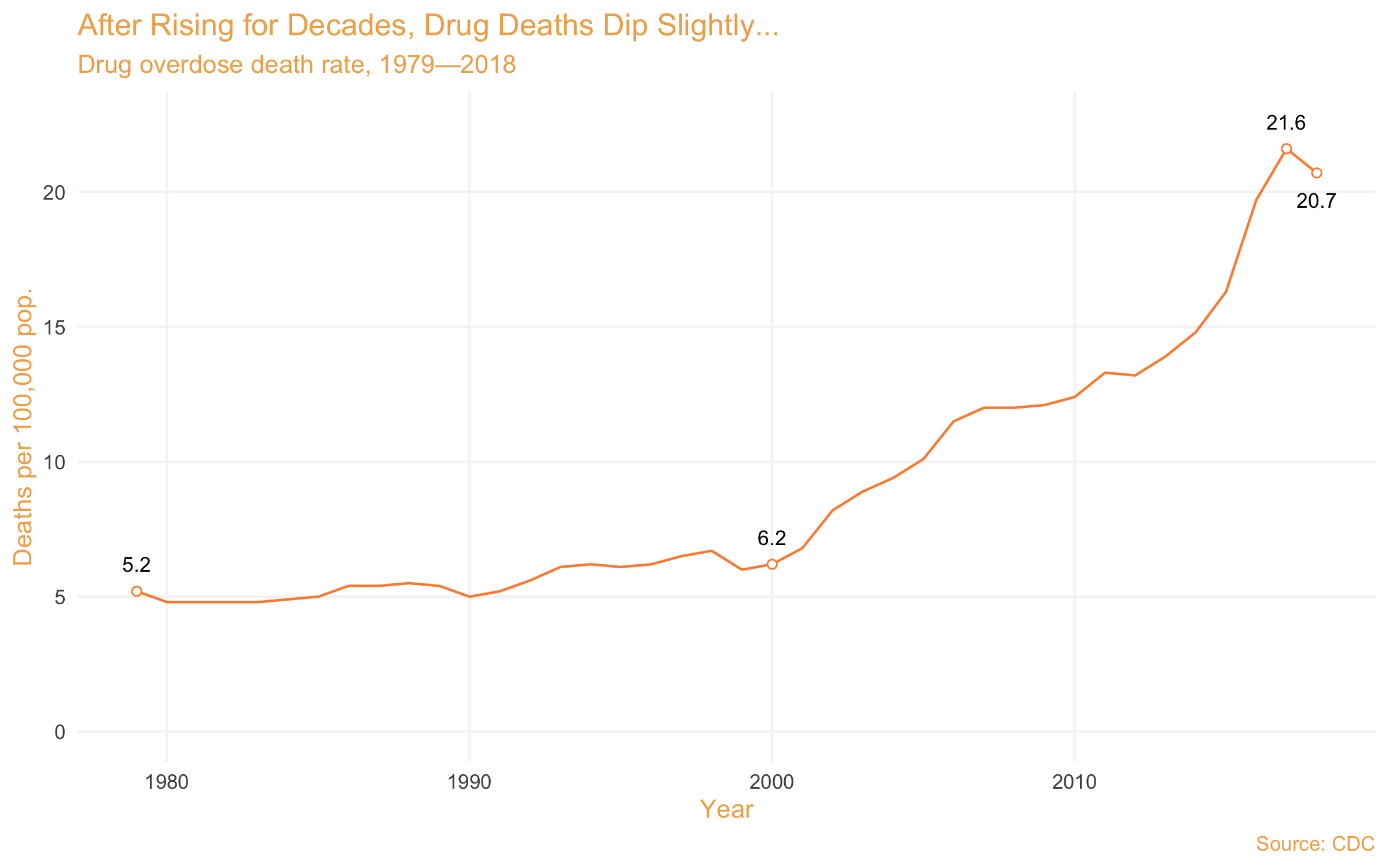 That decline is the first in nearly two decades, CDC data show. In fact, mortality data from the 1980s onward show that drug overdoses have grown exponentially, while data collected by the Senate's Joint Economic Committee indicate that 2017 was likely the deadliest year ever for drug overdoses. At the state level, the CDC finds that drug overdose deaths rose in just five states—California, Missouri, South Carolina, Delaware, and New Jersey—and fell in 14.

Data underlying that overall decline, however, tell a more complicated story. Compared with 2017, 2018 saw slight declines in deaths associated with heroin and methadone, on the order of 0.1 deaths per 100,000 people. It also saw a substantial decline in deaths from prescription opioids, which fell by 15 percent to 3.8 deaths per 100,000, on par with 2014 death rates. It is that drop that drove the overall decline. 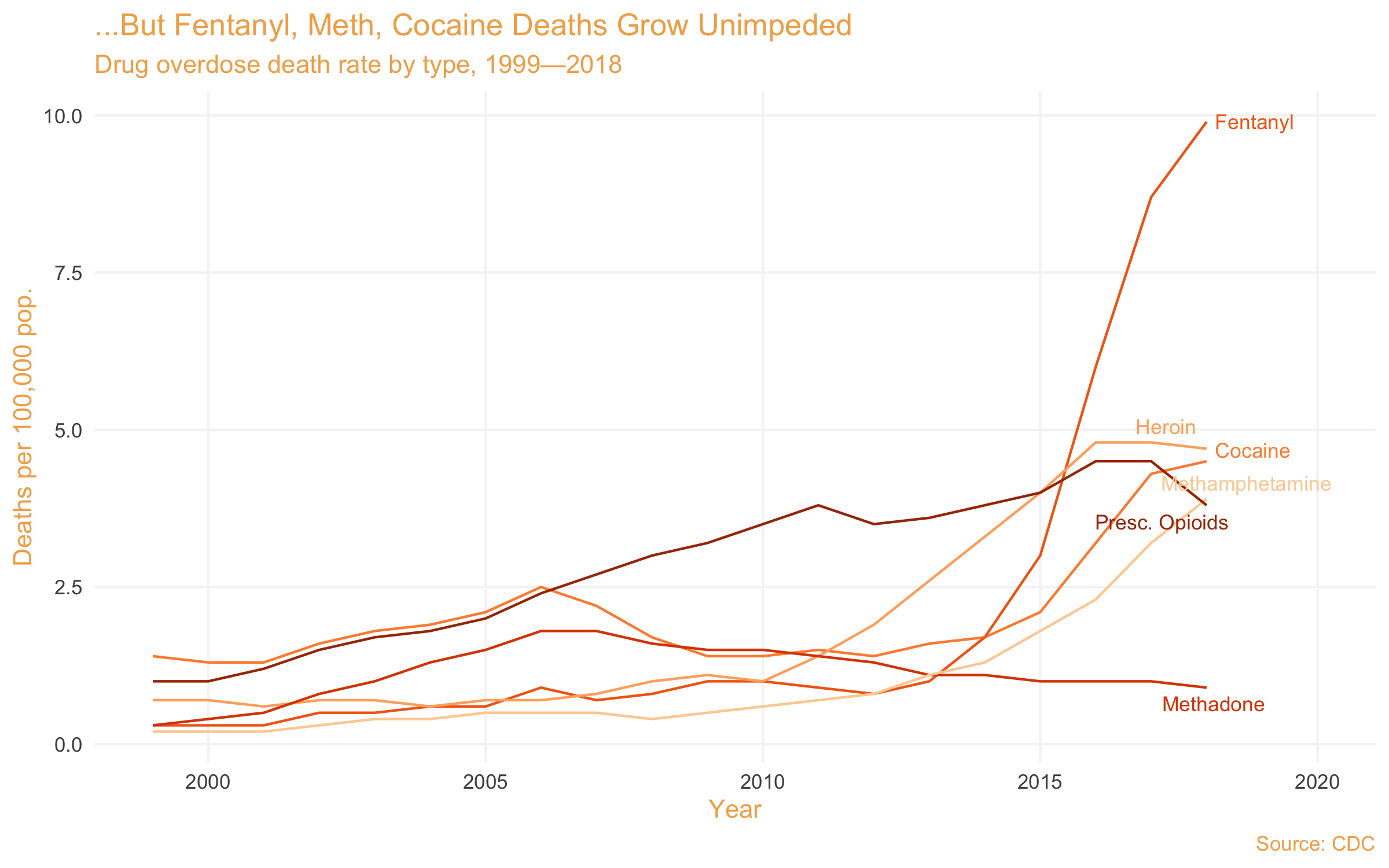 Whereas deaths associated with prescription opioids have fallen, however, deaths involving other drug classes have not. The deadly synthetic opioid fentanyl and its analogs were involved in 31,000 deaths in 2018, 3,000 more than in 2017, a death rate of 9.9 per 100,000 people. There were roughly 2,500 added methamphetamine deaths in 2018, and roughly 1,500 added cocaine deaths, translating to an increase in the death rate of 0.7 and 0.2, respectively.

In fact, methamphetamine has now been confirmed to have eclipsed prescription opioids as a cause of death, while cocaine is on pace to overtake heroin; fentanyl, meanwhile, is by all accounts the deadliest drug in American history. What all of this means in practice is that while topline numbers are positive, the underlying trends indicate that America's drug crisis may soon get worse.

The change in deaths has also meant a change in the geography of the drug crisis. Whereas prescription opioid overdose deaths were driven predominantly by American-made pharmaceuticals—in particular, the Purdue Pharma-manufactured OxyContin—the drugs now killing Americans originate outside the country.

As the DEA explained in its 2019 National Drug Threat Assessment, also released Thursday, most synthetic opioids are produced in China and Mexico; methamphetamine and heroin are primarily Mexican, and much cocaine is produced in Colombia. All of the drugs are routinely smuggled over the porous southwestern border or, in the case of Chinese goods, sent in using the U.S. mail.

"We’re pleased that in 2018, drug overdose deaths declined over 4 percent overall, with even greater decreases—over 13 percent—in overdoses from controlled prescription opioids," DEA acting administrator Uttam Dhillon said Thursday. "Many challenges remain, however, including the spread of fentanyl and methamphetamine across the country. DEA and its partners will continue to work diligently to combat the drug trafficking organizations that bring these deadly substances into our country and endanger the American people."

As the drug crisis changes shape, lawmakers continue to struggle over how best to combat it. On Wednesday evening, the House of Representatives finally passed an extension of the DEA's temporary scheduling of fentanyl's synthetic analogs, giving law enforcement another year to prosecute traffickers in substances like acetyl fentanyl and carfentanil under the strictest section of the Controlled Substances Act. Eighty-six House Democrats, however, objected, with several taking to the floor to argue that a "public health" approach is preferable to the incarceration of drug dealers.