‘Deaths of Despair’ Might Not Be About Despair After All

New report captures a century of 'deaths of despair'

Delving into more than 100 years of data, a report released Thursday casts new light on America's ongoing battle with "deaths of despair."

The issue has risen to prominence since economists Anne Case and Angus Deaton's groundbreaking work revealed that American middle-aged mortality rates had been rising since the year 2000. The pair found that the trend was driven by deaths among non-Hispanic whites, and specifically by an increase in suicides, drug overdoses, and alcohol-associated deaths—what are now collectively labeled "deaths of despair." The concept has since acquired a broader connotation, standing in for various social problems that might be driving these historic increases.

While Case and Deaton's original work focuses mostly on the years since 1999, the Social Capital Project used historical data to understand the role that drugs, suicide, and alcohol all play in rising mortality throughout the 20th century. SCP, a think tank-like operation attached to the congressional Joint Economic Committee under the direction of Sen. Mike Lee (R., Utah), focused its research on the wealth of connections between family, friends, coworkers, and religious communities.

What the SCP found in its analysis is that despair may not be the right way to think about the issue of early mortality after all. The reasons become clearer when looking at more than a century's worth of data from the Centers for Disease Control. 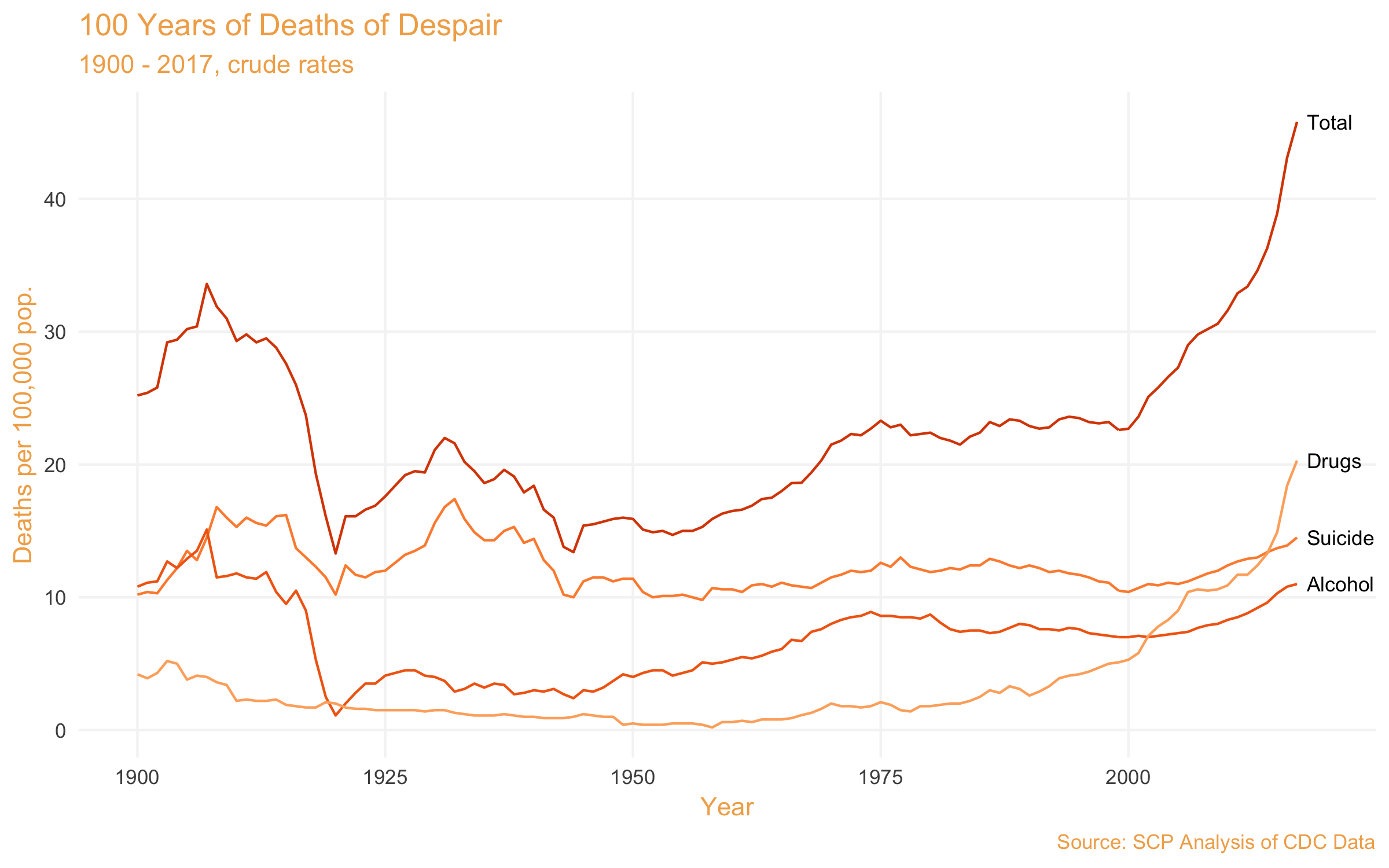 Just as important as the overall rate are the underlying trends among each of the individual causes of death commonly categorized as "deaths of despair." The suicide rate fell prior to and during World War II, then rose again in the new millennium. The rate of alcohol-related deaths fell sharply at the start of Prohibition and has since risen gradually. But the lion's share of modern "deaths of despair" are attributable to drug overdoses, which have grown exponentially over the past half century.

This, the report suggests, may mean that more than just despair is at play.

"One possible explanation of the patterns discussed in this study is that while the suicide and alcohol-related mortality trends primarily reflect a ‘demand-side' problem—a desire to numb or end despair—the drug-related mortality trend also incorporates a ‘supply-side' problem," the report says. "The rise in drug overdoses not only reflects an increase in despair, but a change in the supply, addictiveness, and lethality of drugs that may be taken to numb despair."

Indeed, the rise of drug deaths is as much a product of the rise of synthetic drugs such as fentanyl—a rise that may only be accelerating, according to recent federal warnings—as it is about the motivation behind using the drug.

The "deaths of despair" narrative turns on the idea that Americans are meaningfully more despairing now than before the early 2000s. That claim does not seem to line up with other data, according to the report. 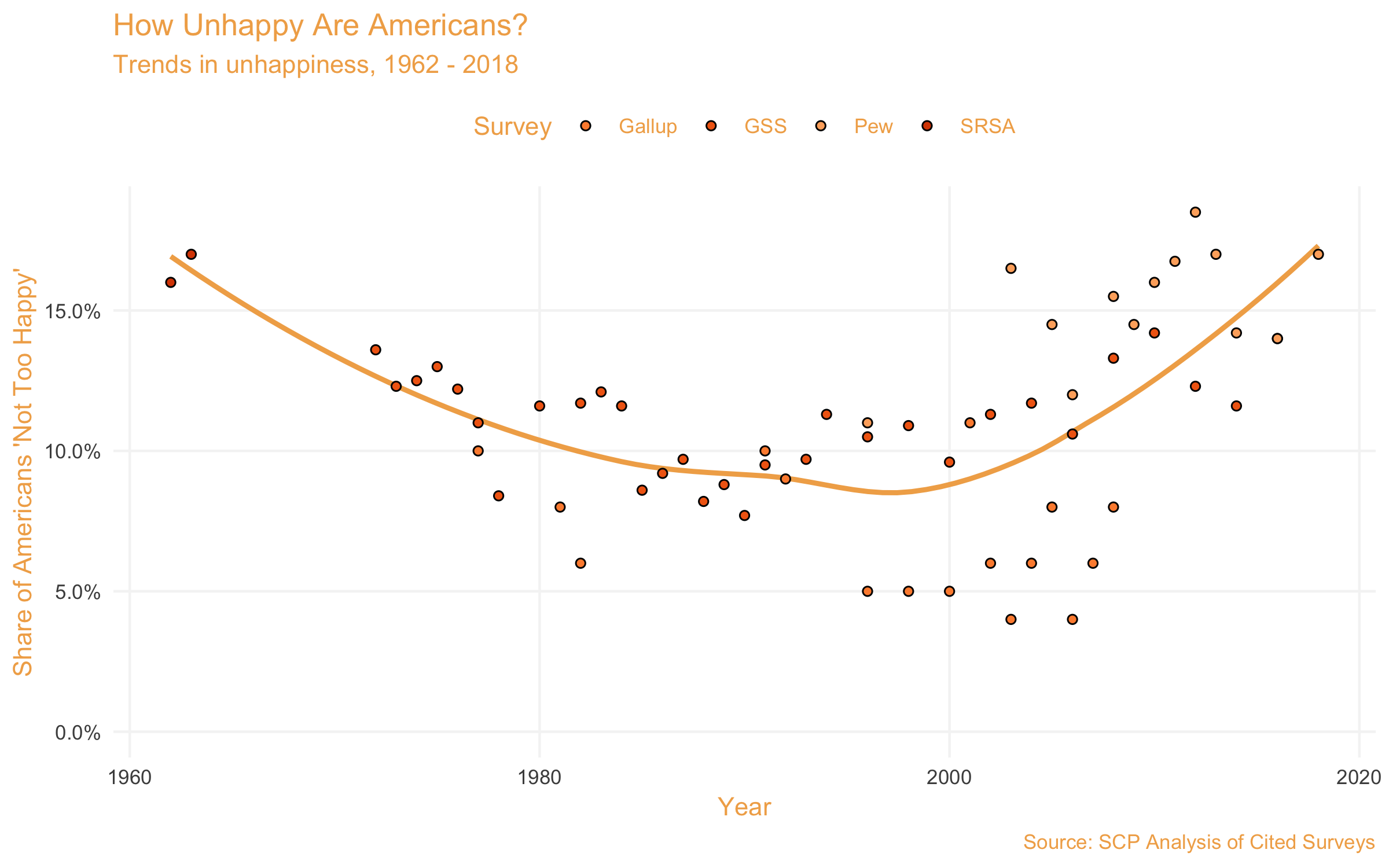 Combining four different surveys, SCP identified the trend in self-reported unhappiness over the past five decades. While the results do show that more Americans claim to be unhappy today than historically, the overall pattern does not line up with trends in deaths of despair.

"While deaths of despair rose between 1965 and 1975 and then leveled off over the next 15 years, unhappiness fell over the period (with a temporary increase during the double-dip recession of the early 1980s)," the report reads. "Unhappiness then rose, but the upward march of deaths of despair began only with a ten-year delay, starting in 2000. Furthermore, if the Gallup Organization trend in unhappiness is correct, unhappiness was flat to declining even in the 1990s and 2000s."

In other words: "Deaths of despair" do not rise and fall in line with happiness.

Past research by the SCP found little empirical evidence that Americans are lonelier today than they have been historically. This suggests, in combination with the happiness data, that claims that Americans are suffering from an excess of despair might be missing the point.

"It is worth emphasizing how challenging the trends in this paper are for theories that explain rising ‘despair' by referring to either economic trends or social capital trends," the report concludes. "It is very difficult to find such trends that improve over the 1970s and 1980s, then worsen after either 1990 or 2000."

The report's conclusions suggest that while "deaths of despair" may be a catchy phrase—one embraced by some politicians—it does not really seem to describe what America is experiencing today. Policymakers, it emphasizes, would do better to focus on the "national opioid crisis" that continues to grip the nation.