According to the book, the nation's capital is "one of China's most desirable U.S. markets for real estate investment." Lowham specifically touted the city's ties to American national security institutions, including the Department of Defense and Central Intelligence Agency. He also touted Chinese investors' ability to secure U.S. residency through the EB-5 program, which awards visas to foreign-funded ventures that claim to generate jobs for Americans.

McAuliffe has his own history with the controversial program. During his 2013 run for governor, the Democrat's electric car company faced a federal investigation centered around a "visa-for-sale scheme." McAuliffe partnered with a financial firm run by Hillary Clinton's brother, Anthony Rodham, to attract foreign investment in the company in return for U.S. residency.

McAuliffe and Rodham contacted the Obama administration to expedite the company's EB-5 visa applications after they were held for "fraud" and "national security" concerns, documents released by Sen. Chuck Grassley (R., Iowa) show. In one 2010 email to a Department of Homeland Security staffer, McAuliffe wrote that he was "extremely frustrated" with the approval process and referenced Virginia Democratic senator Mark Warner in an attempt to grease the wheels.

"You should be aware that Senator Warner and other members of Congress have made inquiries on this project," McAuliffe said. 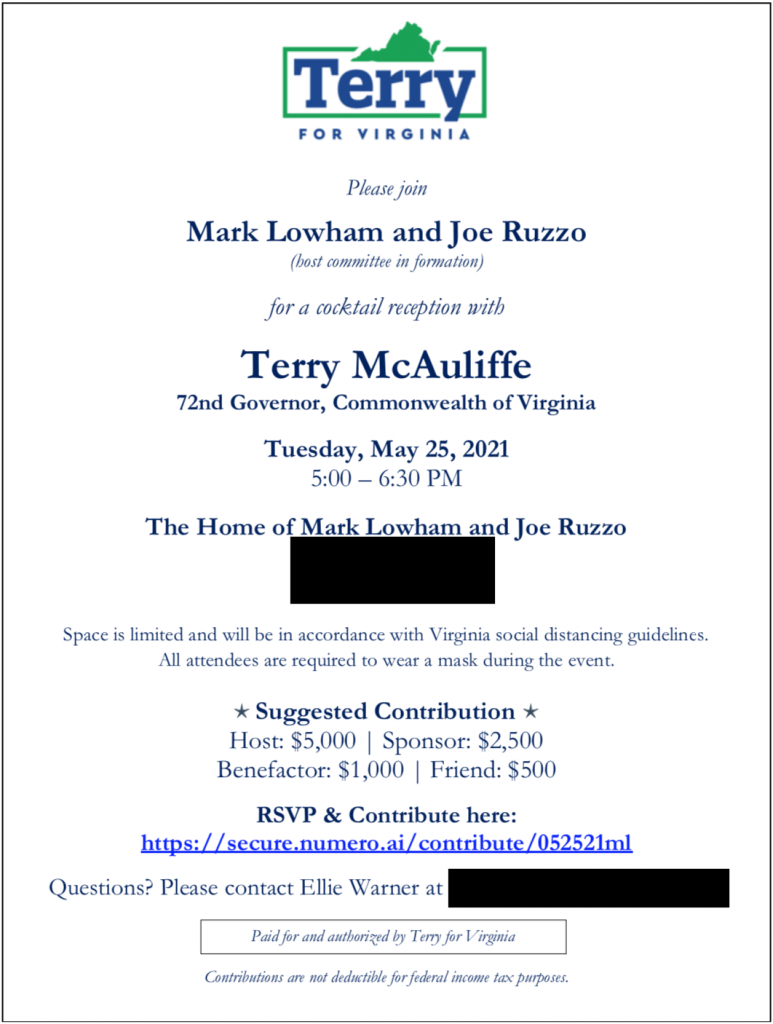 Invitation to the McAuliffe fundraiser hosted at the Lowham mansion.

McAuliffe quietly resigned as chairman of GreenTech in 2012 after opting to move the company's operations to Mississippi instead of Virginia, where he said the business would create 1,500 jobs. The Democrat's shady Chinese business deals, however, go beyond GreenTech.

The Department of Justice targeted McAuliffe in 2016 over a $120,000 contribution he received from Chinese billionaire Wang Wenliang, who also pledged to give $2 million to the Clinton Foundation at the time of the donation.

Roughly a decade earlier, Hillary Clinton's presidential campaign—which McAuliffe chaired—faced criticism after raising $380,000 at a lucrative dinner event in New York City's Chinatown. Most of the attendees at the $1,000-a-plate fundraiser, the Los Angeles Times reported, were not registered voters and listed "dishwasher" and other low-paying jobs on campaign filings. Many donors later said they contributed due to pressure from powerful Chinese families associated with organized crime.

McAuliffe also masterminded a fundraising strategy for former president Bill Clinton that brought the head of a Chinese military-owned weapons company to the White House in 1996.

As governor, meanwhile, McAuliffe funneled $1.4 million from his "Governor's Opportunity Fund" to Lindenburg Industries, a Chinese-owned company that pledged to create 349 jobs in Virginia through an automotive parts factory. McAuliffe's administration did not ask for the company's financial statements until after it provided the money.

Just a year after inking the deal, Lindenburg let its factory enter foreclosure. The company did not hire a single person and missed a deadline to repay the grant in 2016. North Carolina declined to do business with Lindenburg three years earlier after conducting a background check into the company.

McAuliffe did not return a request for comment. Lowham told the Washington Free Beacon that he has "never spoken with Terry about business-related issues."

"Washington real estate is a tremendous value compared to other global capitals, and we continue to see interest from all corners of the globe, including Asia, in our market," Lowham added. "That noted, we have not seen Chinese investors seeking EB-5 visas in our market."

McAuliffe will square off against GOP challenger Glenn Youngkin in November. The Democrat entered June with a sizable cash disadvantage, holding $3.3 million on hand to Youngkin's $4.4 million.