Iowa GOP senator barnstorms Iowa as a 'firewall' to Democratic control in D.C.

DES MOINES—A horde of motorcycles roared toward Carroll, Iowa, on Saturday. The sight and sound of 80 Harley-Davidsons was once the stuff of nightmares in small-town America, with lawlessness and anarchy sure to follow. But the head of this convoy was no outlaw; in fact, she was there to reassure Iowans that if they send her back to the Senate, law and order will follow.

Sen. Joni Ernst (R., Iowa) made six campaign stops on Saturday and Sunday with 80 bikers in tow surrounding her "Joni for Iowa" tour bus at each event. The GOP incumbent has cruised the Hawkeye State each year since 2015 to raise money for veterans organizations and disaster relief, but this year's cruise has also served as a barnstorming run in one of the closest Senate elections in the country. Ernst railed against national liberals throughout the weekend, painting the Democratic Party as a group that wants to "fundamentally change who we are as the United States of America." 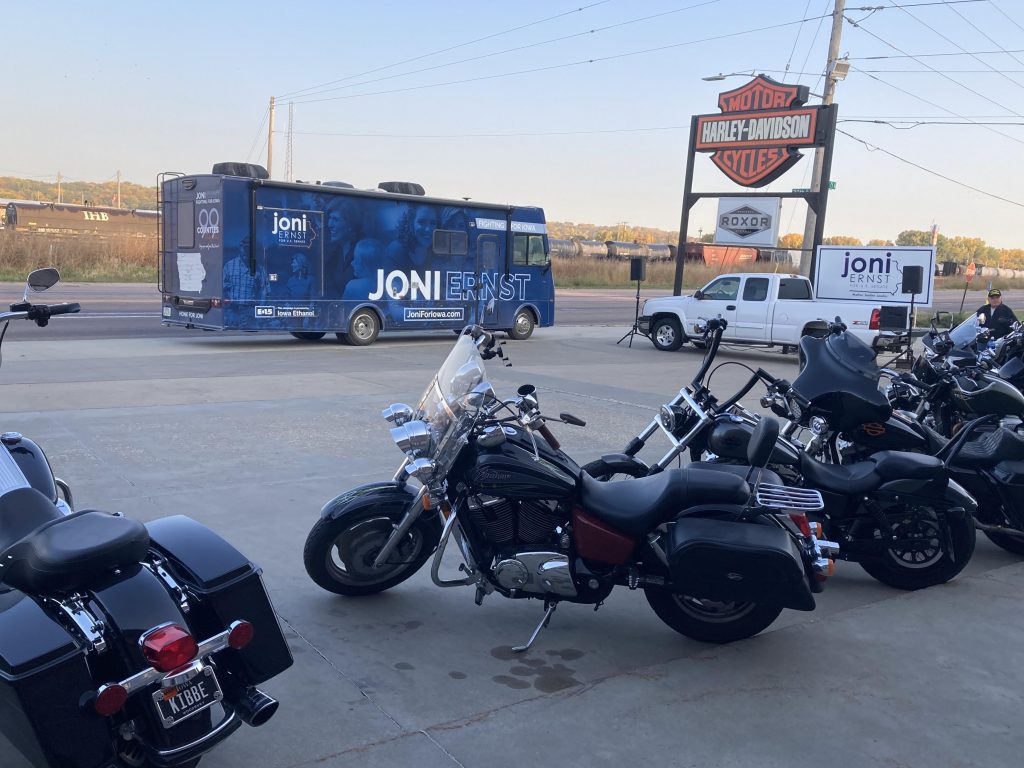 Ernst is battling for her political life in a race considered a must-win for Republicans to retain their Senate majority through 2022. Ernst, who became the first female combat veteran to serve in the U.S. Senate in 2015, pitched herself as a "fighter" during a Sunday afternoon stop in Cedar Rapids. 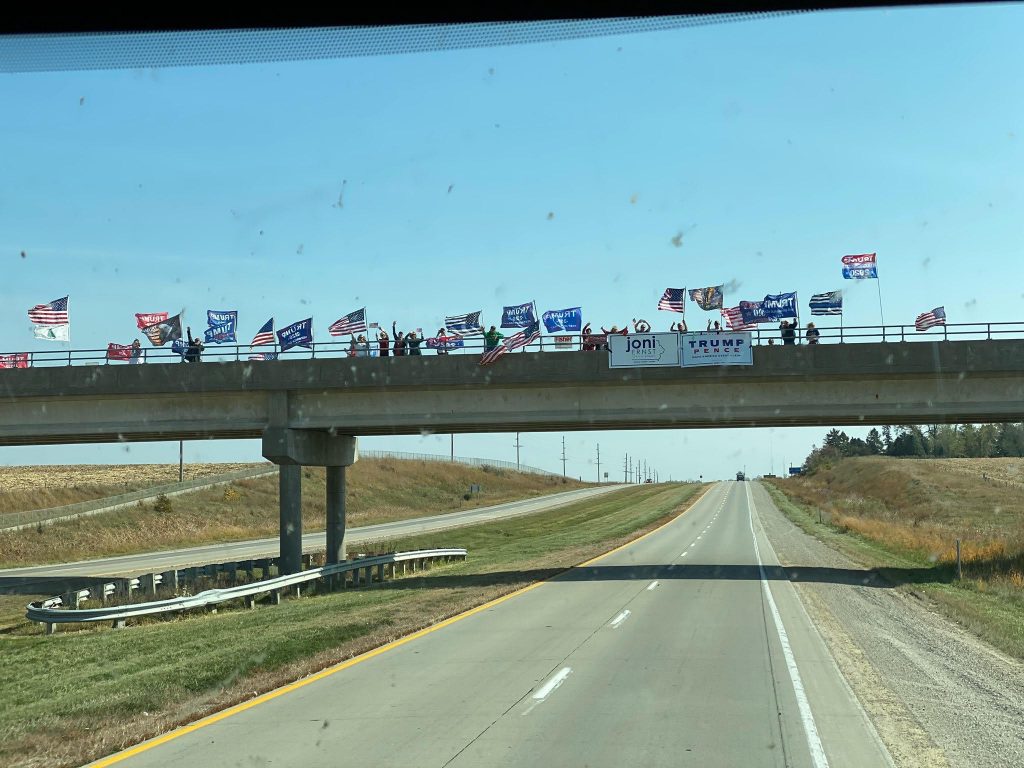 Her bid to lay out the stakes of a unified Democratic government resonated with Iowa residents in attendance. Bill Law of Fruitland, Iowa, agreed with Ernst's message, saying "American freedoms" are on the line in November.

"The Constitution is under attack by the left," Law told the Washington Free Beacon. "Senators like Joni Ernst and a president like Donald Trump are going to protect our freedoms."

The events helped to turn out hundreds of GOP supporters, a strong showing even as Biden and Greenfield have risen in national and state polls. Attendees showed no shortage of enthusiasm for Ernst and President Donald Trump.

A Saturday afternoon campaign stop in Carroll included more than 100 supporters, a "Keep America Great" limousine, and a military tank complete with a turret gun and a "Trump 2020 No More Bulls—" flag.

A large group of Marshalltown supporters also lined a highway overpass with American flags and campaign signs to welcome her caravan of riders en route to a Cedar Rapids event.

Ernst lauded the on-the-ground energy on Saturday morning during the tour's first stop in Sioux City.

"We've got so many great supporters out there. That level of energy and enthusiasm, that's what's going to carry me through the day," Ernst said. "I know we are going to win this race, and … it's going to be done by getting out and interacting with people." 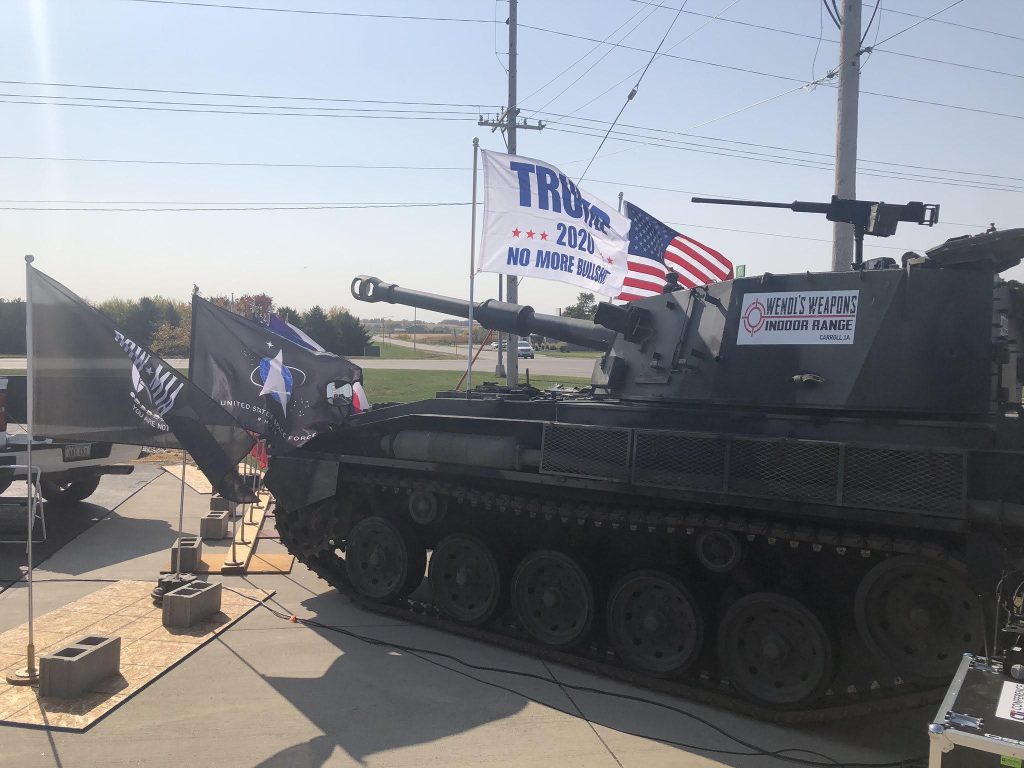 A who’s who of Iowa Republicans joined Ernst throughout the weekend, with guest speakers including Sen. Chuck Grassley, Governor Kim Reynolds, former governor and U.S. ambassador to China Terry Branstad, and congressional hopeful Ashley Hinson. Ernst reinforced her "law and order" message while appearing with Reynolds in Des Moines, telling reporters that suburban women across the state are "really concerned" with the national uptick in violence.

Ernst also used the tour to criticize her Greenfield's lack of access to voters on the trail. The Republican repeatedly touted her record of appearing in all of Iowa's 99 counties. Greenfield, meanwhile, opted to skip an August debate in rural Clay County, which she has yet to visit.

"We have not seen her around the state," Bill Law told the Free Beacon. "How does she expect to get any support if she's not willing to come out and meet face to face with the people?"

Ernst left Iowa for Washington, D.C., soon after the tour concluded to attend the Senate Judiciary Committee's confirmation hearings for Amy Coney Barrett, Trump's pick to replace the late Justice Ruth Bader Ginsburg. She said Barrett’s confirmation was "likely" to occur before Election Day and promised to "do her duty" on the committee regardless of potential political backlash.

That said, she identified the confirmation battle as a winning issue for her campaign, telling reporters that the impending Supreme Court battle would inspire Iowa voters who "really do want to see someone who will uphold our Constitution."

Ernst acknowledged the hectic timeline of the confirmation process and upcoming election, calling 2020 a "tough, tough, tough" election year in Carroll. She credited her military experience, including tours of duty in Kuwait and southern Iraq in 2003 and 2004, respectively, with preparing her for the contentious battles that have defined the 2020 election cycle.

"I am always going to support our veterans and our men and women in the armed forces, because I've had my boots in that sand," Ernst said as she spoke from the bed of a Ford pickup. "I will go toe to toe with anyone who tries to take our freedoms, our opportunities, and our prosperities away from us."