Beto O'Rourke knows a thing or two about losing elections. Until very recently, it's always worked out for him because of his knack for failing upward.

Few others would have dared to run for president after losing a Senate race to Ted Cruz, the second most annoying figure (after Hillary) in American politics.

"Man, I'm just born to be in it," Beto said upon launching his campaign on the cover of Vanity Fair. He dropped out eight months later, having received precisely zero votes in the Democratic primary.

So, when Beto suggests Joe Biden isn't doing enough to lose the presidential election, his words shouldn't be dismissed out of hand, as they carry the authority of a seasoned political loser.

Beto's advice for the Biden campaign, as reported by Politico, seems especially misguided, but only from the perspective of someone who prefers to win. Instead of spending so much time and money in Pennsylvania, Beto argued, the Biden campaign should be focused on trying to win Texas, his home state.

"Here's one story that I think is fucking —" he said, pausing and trying to settle down. "They are spending something close to a kajillion dollars in Pennsylvania. I'm not a Pennsylvanian and I've only been there like 10 times. But the strategy seems like it's focused on winning over disaffected white Dems."

He noted how these were voters who had a habit of voting for Democrats for multiple generations but abandoned the party in 2016 for Trump. Were they really the future? "Maybe we get them back and maybe we don't," he said. "Good luck!"

O'Rourke, whom the Politico piece charitably describes as "one of the most passionate and excitable speakers in American politics," does not speak for most Democrats. Texas hasn't voted for a Democratic president since 1976, whereas Donald Trump was the first Republican to (narrowly) win Pennsylvania since 1992.

One Texas Democratic organizer told Politico that Biden's inability to win over Latino voters was a huge impediment to his chances of winning the state.

"Let's be honest," she said, "people are not super thrilled about Biden. And Kamala, for all she did for the African American community, there's not a connection with the Latino community."

Beto, however, offers a powerful counterargument: "Can we win Texas?" he asked. "Fuck, people have been saying that forever. But this is about leveraging all of its power!" Right on.

Politico goes on to note that Beto is simply looking out for Beto. He could have run for Senate again this year and probably would have had a decent chance of beating GOP incumbent John Cornyn. Instead, he decided a pointless presidential campaign was a better use of his time. But he might run for governor in 2022, in which case he would like to "get credit if Biden wins Texas," according to someone close to him.

Sure, taking credit for someone else's victory isn't the same thing as winning, but it's good enough for Beto. And even though Biden isn't going to win Texas, at least Beto won't have lost it, and that's progress. Congrats! 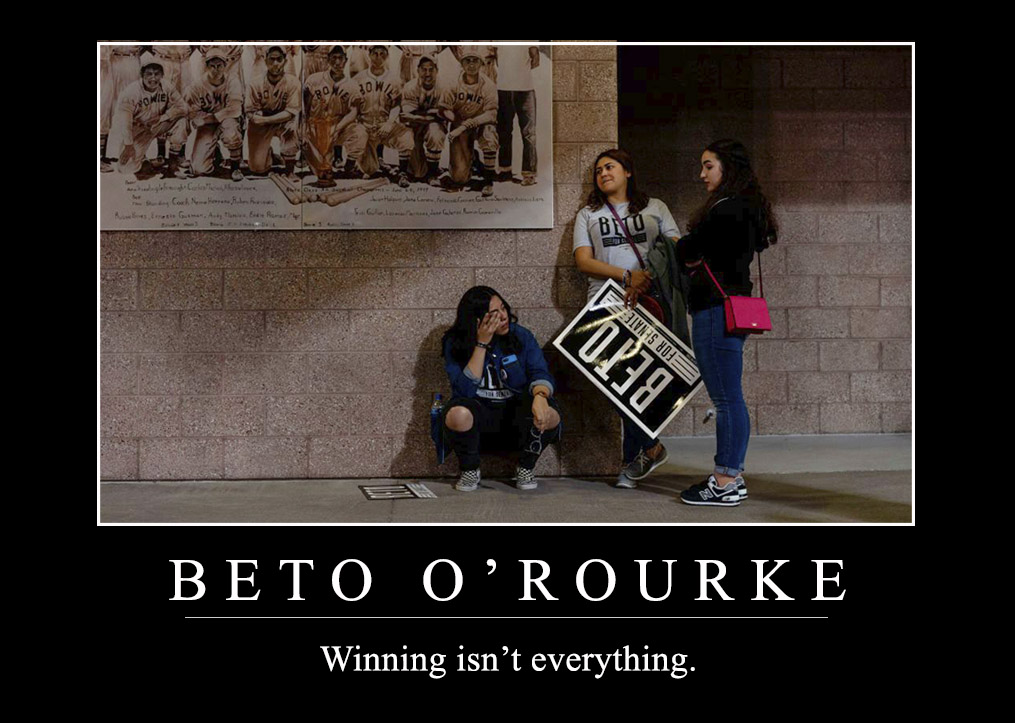