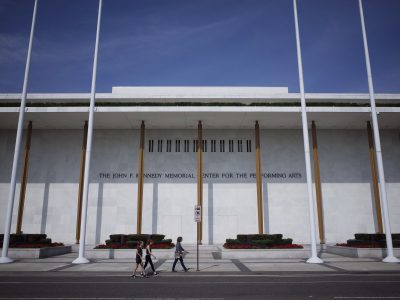 The news, which was delivered on an all-staff conference call organized by the National Symphony Orchestra's executive director Gary Ginstling, followed another announcement from Kennedy Center president Deborah Rutter on Friday indicating that National Symphony Orchestra musicians would stop receiving paychecks after April 3—a move that infuriated the musicians, whose union immediately filed a grievance and spurred GOP lawmakers to begin trying to claw back the money sent to the organization in the stimulus package.

The Kennedy Center, which did not return multiple requests for comment prior to publication, defended the recent layoffs and outlined a projected breakdown of its bailout money on Tuesday afternoon. Rutter said in an email to supporters obtained by the Free Beacon that the center plans to spend $12.75 million on employee compensation and another $7.5 million on health benefits. Despite having an endowment of nearly $100 million, the arts organization claims it will run out of funds by July even if it reopens on schedule in May.

"It is imperative that we scale back the entire institution’s personnel costs during this time of closure and dearth of ticket income," Rutter said. "If no changes are made to our spending patterns, even if we are able to open in mid-May, with the recent $25 million federal stimulus funding, the Kennedy Center would run out of cash as early as July."

Rutter had previously defended the cuts, saying in a Saturday statement that the decision to stop paying musicians "may seem drastic," but that it was "the only way through this." She warned then that future layoffs could come.

A veteran orchestra member who requested anonymity said the speed with which the organization has dropped employees gives the impression that leadership misled Congress when it lobbied for the multimillion dollar bailout. "It's starting to look like the Kennedy Center knew it was going to lay everyone off even before they lobbied for funds in the bailout," this person told the Free Beacon. "That's very disturbing and a huge hit to morale. I'm not sure how we can trust our leadership after this."

Republican lawmakers are pushing to rescind the bailout in the wake of the layoffs. Rep. Bryan Steil (R., Wis.) has introduced legislation that would revoke the $25 million awarded to the cultural center in the $2 trillion bailout package signed last week, known as the CARES Act, which provides relief to those left unemployed by the coronavirus pandemic.

"This money should be spent fighting the virus or in taxpayers' pockets," Steil wrote in a Tuesday tweet.

"Nancy Pelosi literally held the bill up for days to get her pet projects, including the money for the Kennedy Center," Scalise said.

"Interesting she’d use the choice of words, ‘fiddlers,' because it was the fiddlers, the violin players, all the musicians at the Kennedy Center that got laid off right as the bill was signed. They ought to give that money back," he added in reference to Pelosi's Sunday morning attacks on President Trump.

The orchestra filed a grievance, released Saturday, saying that the center violated its contract, which stipulates that artists be given at least six-weeks notice before laying off the members. They were informed of the layoffs just a week in advance.

"While the Union understands that the Kennedy Center has decided to cancel all performances through May 10, 2020 because of the COVID-19 pandemic, those cancellations do not give the Association any contractual basis for failing to comply with the sections of the [agreement]," the grievance says.

Pelosi faced bipartisan criticism for including provisions unrelated to the coronavirus crisis in her stimulus bill, including the Kennedy Center money. The organization argued that it needed the money in order to reopen when the pandemic passes.

"Our workforce includes artists, programmers, administrative and production staff, ushers, bartenders, food service employees, parking attendants, and many more, all of whom have been impacted or will soon be impacted by the closure of the Kennedy Center," the organization said in a statement. "The ability to deliver on our mandated mission is at risk. As a result, federal relief funding is the only way we will be in a position to reopen the nation’s cultural center when our government officials tell us it is safe to do so."

The stimulus legislation provided $25 million to "cover operating expenses required to ensure the continuity of the John F. Kennedy Center for the Performing Arts and its affiliates, including for employee compensation and benefits, grants, contracts, payments for rent or utilities, fees for artists or performers."

The Kennedy Center is scheduled to reopen on May 10, though it can continue spending stimulus funds through September 2021.

Update 4:50 p.m.: This piece has been updated to include a public statement from the Kennedy Center.