Source: Paul Krugman Has Never Given Money to Charity

New York Times columnist Paul Krugman on Tuesday formally endorsed the Democratic midterm strategy, spearheaded by Senate Majority Leader Harry Reid (D., Nev.), of demonizing the libertarian philanthropy barons Charles and David Koch. Liberals are so worked up about the Kochs, they recently protested outside a New York City hospital that received a $100 million donation from David Koch, who Reid has described as "un-American" and "against everything that’s good for America.

Under the headline, "Things Go Better With Kochs," which, as Krugman explains, it exceedingly clever—Koch is pronounced "coke," as in Coca Cola, a soft drink company whose slogan in the 1960s was "Things go better with Coke"—the Nobel Prize winning scholar writes:

[T]he Kochs are perfect villains. It’s not just what they are — serious evildoers who use their wealth to push hard-line right-wing, anti-environmental policies that redound very much to their own benefit. It’s also what they aren’t: they’re wealthy heirs, not self-made men, they aren’t identified with innovation (which you can at least argue for Bill Gates), they haven’t made money for other people like Warren Buffett. So focusing on the Kochs is a way to personalize a vision of conservative politics as a defense of people with unearned privilege.

And here’s the thing: that vision is basically right.

So just to be clear: Here we have The Preeminent Columnist at The Paper of Record (and Ivy League professor) calling a couple of rich guys "serious evildoers" for being rich and holding political views contrary to his own. "Koch-bashing," he concludes, is just another word for economic justice. What a marvelous thing to say, especially coming from a Thought Leader such as Krugman.

I particularly enjoyed the references to other rich dudes. The way Krugman puts it, he seems to be suggesting that even Bill Gates (of the Bill & Melinda Gates Foundation) might deserve the full Koch treatment if not for the fact that he is arguably identified with innovation. And Warren Buffett? Oh, he’s cool. He’s "made money for other people," which seems like a relatively low and inevitably subjective bar for judging rich people. Buffett, who, like Krugman, is rich and supports President Obama, is nothing like the Kochs, who merely employ some 60,000 people in addition to injecting their evil into the world.

Such is the current state of left-wing Though Leadering in this country. But it’s merely a prelude to some actual breaking news: The Free Beacon has exclusively learned that, according to at least one New York Times subscriber, Paul Krugman has never donated money to charity.

"His poor father must be so embarrassed about his son," said the source, who requested anonymity because he didn’t think the burden should be on him/her to disclose his/her identity. "I have no problem with somebody being really, really wealthy. But Paul Krugman hasn’t given a single dime of his [estimated $2.5 million] fortune to charity."

If true, the allegations would be profoundly embarrassing for Krugman, who prides himself as an enlightened four-star general in the war on income inequality, and is an outspoken opponent of spending other, richer people’s money to help poor people. Of course, we don’t know for certain what the source said is accurate. But since I began writing this post, more sources have come forward anonymously to confirm this claim. None, however, have offered any proof.

"You guys have said his wealth is $2.5 million," said a third source, who always says yes when people ask if he has read the latest Times article about a hot new trend in Brooklyn, even though he typically hasn’t. "Not a chance in the world. It’s a lot more than that. I mean, you do pretty well if you don’t give any money to charity when you’re making New York Times columnist money. I am not basing this on some figment of my imagination."

The sources have called on Krugman to release at least 10 years worth of tax returns in order to set the record straight. "He has donated to charity in his entire life!" said the original NYT-subscribing source. "Now, do I know that that's true? Well, I'm not certain. But obviously he can't release those tax returns. How would it look?"

If this sounds familiar, it’s because all these quotes are taken nearly verbatim from Harry Reid during the 2012 presidential campaign. Reid insisted on multiple occasions, including once while speaking on the Senate floor, that Republican nominee Mitt Romney had not paid taxes for 10 years. The allegations, of course, were 100 percent false.

In this case, however, is it not incumbent upon Krugman to release his own tax returns and clear his name? Our anonymous sources seem pretty convinced that they are right. After all, Krugman once refused to participate in a debate with a rival economist that would have raised more than $70,000 for—you guessed it—charity. Is Paul Krugman afraid of the truth?

Addendum: Harry Reid, by the way, is a multi-millionaire who was recently busted by the Federal Election Commission for what looks a blatant attempt to conceal $16,000 worth of questionable campaign payments to his own granddaughter, who is clearly just a wealthy heir, not a self-made woman. We can’t all be like Paul Krugman and use our brilliants minds to become rich enough to buy a "one-bedroom condo…nothing fancy but right on the beach" in St. Croix. No, Harry Reid is nothing like the Koch brothers, or Mitt Romney for that matter, though he certainly has plenty of experience when it comes to making other people making money for other people. 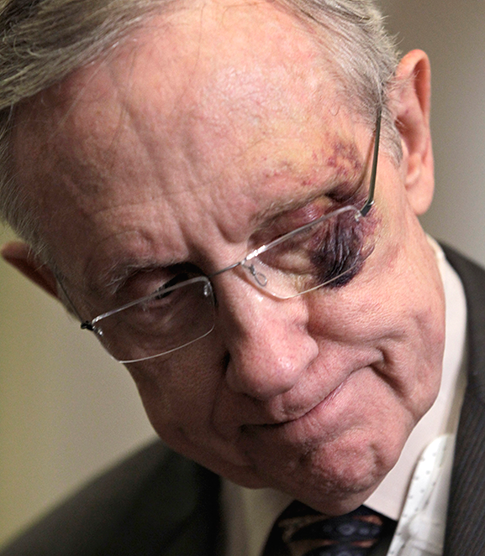