I hope you're are buckled in, because I'm about to blow your f***ing minds.

We know this because of a tweet sent by NBC reporter Leigh Ann Caldwell claiming that "Kennedy and Trump/WH had been in negotiations for months over Kennedy’s replacement. Once Kennedy received assurances that it would be Kavanaugh, his former law clerk, Kennedy felt comfortable retiring."

Kennedy and Trump/WH had been in negotiations for months over Kennedy’s replacement. Once Kennedy received assurances that it would be Kavanaugh, his former law clerk, Kennedy felt comfortable retiring, according to a source who was told of the discussions.

Furthermore, the five names Trump added to his list of Federalist Approved judges last November was to get Kavanaugh on that list. The other four names were considered cover, per source.

In other words: the decision has been baked for a while:
W/ @frankthorp

Now naysayers might point out that Caldwell immediately followed up by indicating that she "[doesn't] have any info on whether [Trump] talked to [Kennedy]" and was citing only one source.

To be clear: This is from one source and dont have any info on whether potus talked to kennedy about a possible replacement.

Or that she went back and deleted the tweet and said there was no "transactional nature" to Kennedy's discussions with the White House and that Kennedy listed a bunch of judges, not just Kavanaugh.

I’ve deleted this tweet because it incorrectly implies a transactional nature in Kennedy’s replacement. I am told by a source who was not directly part of the talks that Kennedy provided Pres. Trump/ WH a list of acceptable replacements. (1/2) pic.twitter.com/ptxJmrbH9S

Those naysayers, I hope to prove, work for Putin. But let's take a slight detour first.

Center for American Progress president Neera Tanden blew this one wide open back in June.

Just to state this: Justice Kennedy's son gave a billion dollar loan to Trump when no one would give him a dime, and Justice Kennedy has been ruling in favor of the Trump Administration position for 2 years as the Court decides 5-4 case after 5-4 case.

The quid pro quo here is obvious. First, the Kennedys provided Donald Trump with a $1 billion loan. In return for that favor, the Kennedys also ruled in Trump's favor in exchange for nothing. Rather deviously, Kennedy also ruled in favor of the Trump administration on cases where his past rulings strongly suggest he would've done so anyway. It makes too much sense NOT to be true.

3. MSNBC's Stephanie Ruhle IS IN ON IT

The MSNBC host immediately threw cold water on Tanden's theory at the time, citing her previous work with Justin Kennedy at Deutsche Bank (note: "Deutsche" is German for "Russian") and claiming he didn't have anything to do with the Trump loan.

Since the fact is unimpeachable that the Kennedys traded $1 billion in return for them also giving Trump other things, we can only assume Ruhle is in on the conspiracy. But back to the Kavanaugh conspiracy…

Just a reminder: Justice Kennedy’s son made a billion dollars in loans to Trump from the Russia infested and sanctioned Deutche Bank. https://t.co/HVqLIAzmPm

5. The Kennedy/Trump secret alliance dates back at least to 1998

That's when Trump got his first Deutsche Bank loan.

6. Trump was already a Russian agent, dating back to 1987

"What If Trump Has Been a Russian Asset Since 1987?" Jonathan Chait wrote for New York Magazine Monday. In a whopping 8,000 words, Chait lays out the case that, maybe, one day, hypothetically, you never know, there might be evidence indicating that, perhaps, there's a chance Trump has been a Russian agent dating back to 1987, possibly.

Chait notes that Trump began railing against the U.S. providing security to nations like Japan in return for no compensation in 1987. He briefly entertained the notion that Trump's showy entrance into politics and attacking America's "bad deals" might somehow be related to the 1987 release of The Art of the Deal. But Chait notes Trump was talking about Japan two months before The Art of the Deal was released, and surely no one has ever sought publicity or had an idea before a book release.

Instead, the shift must have been brought about by Trump's 1987 trip to Russia, Chait concludes. But he does assuage the doubters:

The safest assumption is that it’s entirely coincidental that Trump launched a national campaign, with himself as spokesman, built around themes that dovetailed closely with Soviet foreign-policy goals shortly after his Moscow stay. Indeed, it seems slightly insane to contemplate the possibility that a secret relationship between Trump and Russia dates back this far. But it can’t be dismissed completely. How do you even think about the small but real chance — 10 percent? 20 percent? — that the president of the United States has been covertly influenced or personally compromised by a hostile foreign power for decades?

I can see no flaws in this logic.

The safest assumption is this is false. It seems slightly insane to say it's true. But if there's at least a 10 percent chance this is true, shouldn't we be discussing it?

8. Trump and Kennedy would only choose someone else in their Russian spy circle to replace him on the Supreme Court

9. Brett Kavanaugh is a Russian agent who reports directly to Putin

I understand this may be confusing to some. So I've decided to make a chart. 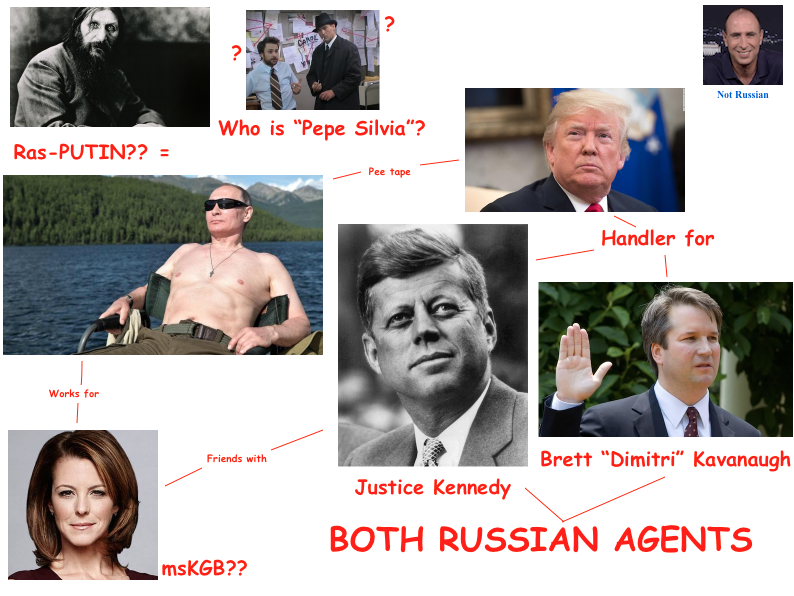 I know what you're thinking: "Alex, isn't this all a bit speculative?" Well, what's the alternative? That multiple reporters and respectable center-left pundits have fallen prey to absurd, unproved conspiracy theories about President Donald Trump as a result of the impotence and frustration they feel at an inability to curb his policy and Supreme Court picks?

Personally, I find that hard to swallow.