Kay Hagan’s Friends in the Media

Being Kay Hagan (or a member of her immediate family) is a pretty good gig if you can find it. As a Democratic senator, Hagan has significantly increased her net worth since getting elected and her husband, son, and son-in-law have received taxpayer funding for their businesses. Additionally, she appears to have convinced the local media that stories reflecting poorly on her are unfit for print.

The Charlotte Observer is under fire from Republicans for pulling a story about Hagan and the stimulus grants her family received. After briefly posting a story about state government officials calling for a "legal review" of the grants—with the headline: "Memo: Grant given to company run by Sen. Hagan's husband needs ‘legal review'"—the Observer erased the story from its website.

Here is the cached version: 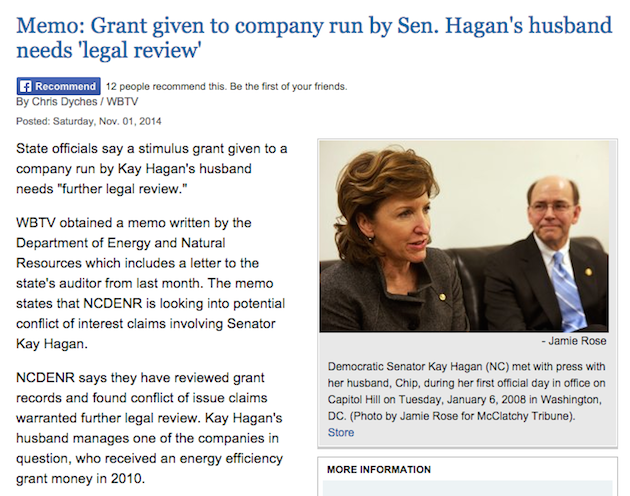 Here what happens if you search for it now:

WBTV recalled that story, requiring us to remove it from the Observer's website. #ncsen

North Carolina Republicans were not impressed.

"It’s time to end the conspiracy of silence in the North Carolina media on Senator Kay Hagan’s ‘stimulus’ payday," N.C. GOP chairman Claude Pope said in a statement. "If the Observer hid this news story because it was inaccurate, they ought to tell us. If they hid it to protect Senator Hagan, or because they feared the truth, they ought to apologize for misleading the people of North Carolina."