The truth is more complex, our analysis finds

Even before he boarded Air Force One to fly off to Britain, the former enemy empire vanquished by American rebel forces during the Revolutionary War, President Donald J. Trump was feuding with Sadiq Khan, the mayor of London who recently said it was "un-British" for his country to host Trump for a state visit.

Trump took a swipe at Khan's diminutive stature in a brief interview with reporters outside the White House, comparing him unfavorably to another mayor with whom Trump has feuded, New York's Bill de Blasio.

Trump continued to fling barbs at Khan while en route to London, once again playing the height card.

The president's insults raise a number of interesting questions, and deserve to be put in proper context. Khan, who reportedly measures in at 5 ft. 6 in., is indeed shorter than Mayor de Blasio, who stands at a lanky 6 ft. 5 in. Khan is not, however, "half" de Blasio's height.

Our analysis found that, for Trump's statement to be rated "true," Mayor Khan would need to measure in at the remarkably diminutive height of 3 ft. 2½ in, which would make him just a few inches taller than an average-sized Great Dane. There simply isn't enough evidence to support that conclusion.

According to scientific data, Khan is three inches shorter than the average British male. Trump, on the other hand, is several inches taller than average at 6 ft. 3 in, and a full nine inches taller than Khan. Such a lopsided height advantage is typically indicative of dominance in a social and/or geopolitical context. Khan is slightly shorter, for example, than Russian President Vladimir Putin, who stands at 5 ft. 7 in.

Khan's critics, however, might want to consider the fact that the London mayor is actually taller than a number of American icons, including:

The following graphic should help provide a deeper understanding of the ongoing controversy. 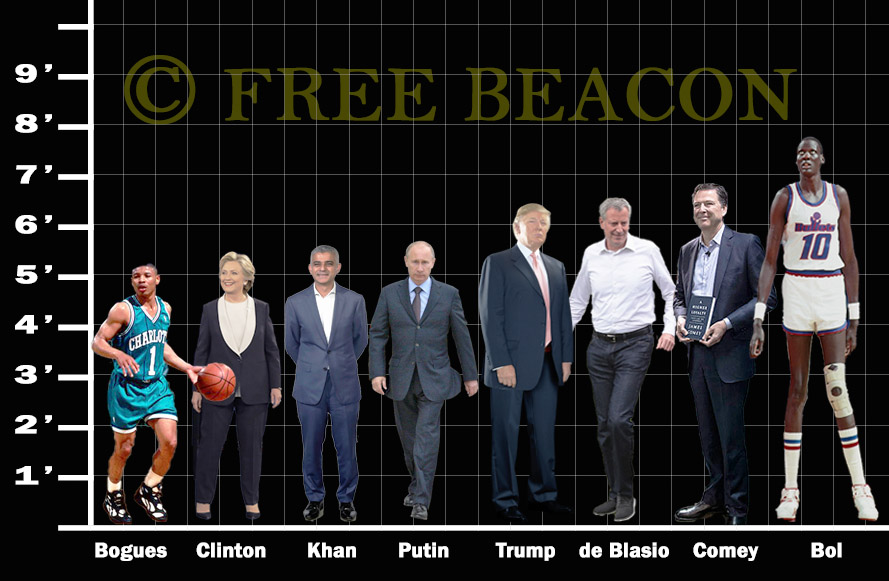