President Joe Biden is headed to the Middle East this week for the first time as president, in part to advance the historic peace agreements the Trump administration helped secure between Israel and many of its neighbors.

It’s bad timing for one of his nominees, Dr. Tamara Cofman Wittes, who spent the Trump years as a Twitter warrior trashing the Abraham Accords and —well, now it’s awkward.

We assume that’s why, according to our Alana Goodman, the Jewish Democratic Council of America is rushing in to shore up Wittes’s street cred with a letter to the Senate Foreign Relations Committee from "leaders in foreign policy, national security, and the Jewish community" attesting to her stellar support for the Abraham Accords: "As Dr. Wittes said during her hearing," Jewish Democratic Council CEO Halie Soifer writes in the letter, "the Abraham Accords ‘offer a foundation for regional cooperation between Arab states and Israel, on shared issues like energy, water, and health.’"

It would be hard to come up with a sleazier, more dishonest, more lawyerly case for Wittes’s nomination.

Wittes may have regurgitated platitudes at her confirmation hearing intended to assure lawmakers of her support for the Abraham Accords that are now Biden administration policy, but one has to think she was more honest when she wasn’t gunning for votes. That’s when she slammed the peace agreements as a "new Naksa"—that is, a setback or catastrophe—for the Palestinian people, called the normalization agreements between the United Arab Emirates, Bahrain, and Israel a step "in the wrong direction," and took to her podcast to mock their significance: "For your average Israeli, what is most exciting about this is that instead of having to fly to Istanbul to get to Southeast Asia, they can fly through Abu Dhabi and Dubai, it is much faster," she sneered. 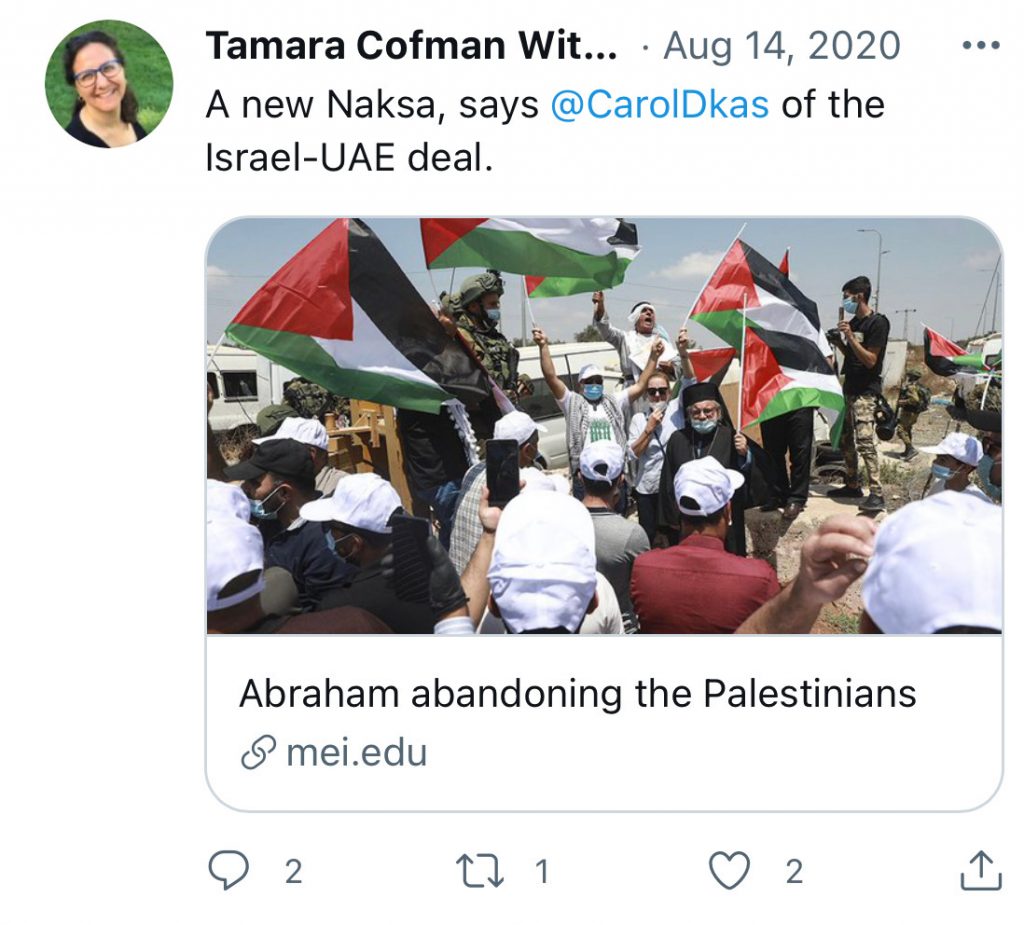 Consider those remarks in light of the rest of the letter, which describes Wittes as an "open-minded and principled" woman who "always finds time to listen to alternative views and give them full consideration."

Wittes’s post-hoc explanation for her tweets—that she "was skeptical that other Arab states would join" the Abraham Accords—makes no sense and is plainly refuted by the record. Bias and ignorance are the best case explanation for her position then. At least as plausible is that Wittes had in mind Qatari opposition to the Abraham Accords: The repressive Gulf monarchy was at the time funding her perch at the Brookings Institution, and Wittes had no compunction about lavishing praise on her benefactors.

That a supposed Middle East expert was upstaged and discredited by the political novices in the Trump administration is embarrassing but not disqualifying. Her dishonesty during her Senate testimony should be.