President Joe Biden’s nominee for a top role at the U.S. Agency for International Development has a long history of praising Qatar, the oppressive Gulf state with a shoddy human rights record that includes restrictions on free expression and the criminalization of same-sex sexual conduct.

Tamara Cofman Wittes is slated to appear before the Senate Foreign Relations Committee on Thursday, where the panel will consider her nomination to be an assistant administrator of USAID. If confirmed, she would be responsible for distributing billions of American aid dollars throughout the Middle East.

As a Middle East policy fellow at the Brookings Institution, where she worked first from 2003 to 2009 and then from 2012 until earlier this month, Wittes lavished praise on Qatar, a repressive nation that discriminates against gays, lesbians, and transgender individuals. Wittes described Qatar's capital city Doha as a "global gathering place for dialogue" and amplified Qatari leaders' claims that they support human rights and oppose "extremists who exploit religion to incite violence."

The Brookings Institution was at the time raking in millions from Qatar—its "Doha Center," renamed after the organization came under scrutiny for the partnership, had a controversial 14-year run. Wittes’s confirmation hearing comes as the Brookings Institution faces renewed scrutiny over its foreign financial ties. The think tank’s president, retired general John Allen, resigned on Sunday amid news that he is under federal investigation for his alleged role in illegally lobbying for Qatar.

While the Brookings Institution took money from several foreign governments over the past decade, Qatar appears to be its most significant foreign donor, pouring at least $22 million into the think tank between 2013 and 2021, according to congressional financial disclosures and the organization’s annual donor reports.

Wittes’s record, laid out in her writing and prolific tweets that are now shielded from public view, also includes criticism of U.S.-brokered deals normalizing relations between Israel and Arab governments and of Israel’s pushback on activists calling for an economic boycott of the Jewish State. It may be an obstacle as she looks to win Republican support ahead of her confirmation hearing. It is unclear, for example, how Republican lawmakers will respond to her amplification of a tweet suggesting that Trump supporters should be subject to the same process of "denazification" that sought to rid Germany and Austria of Nazi ideology after World War II. 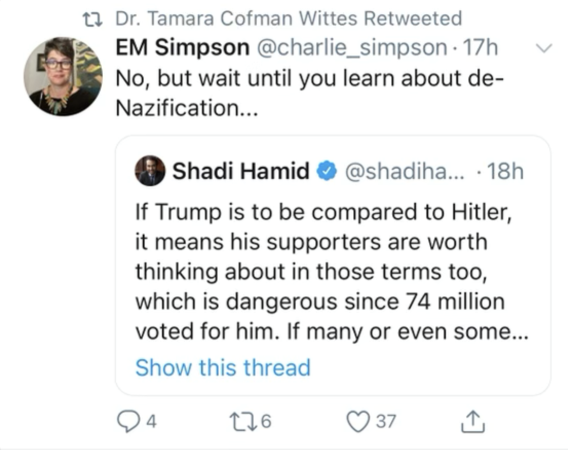 Congressional Republicans voiced concern about her criticism of the Abraham Accords, an agreement that normalized ties between Israel and the United Arab Emirates, among others.

"Wittes was one of the most bitter opponents of the Abraham Accords. She trashed everyone involved, including and especially Israel," a senior Republican congressional aide told the Washington Free Beacon.

Wittes quoted articles decrying the deal as misogynistic, a "new Naksa"—referring to the Palestinian word for "setback"—and as a "triumph for authoritarianism."

"If I were an Arab leader weighing ties with Israel, I would have 2 things in mind," Wittes wrote on Twitter in September 2020. "1) A promise from [Trump adviser Jared] Kushner now isn’t worth much. Why not wait until after Nov elections? 2) Bibi’s backtracked on his commitments to UAE; his promises aren’t worth much either. Let’s wait & see." 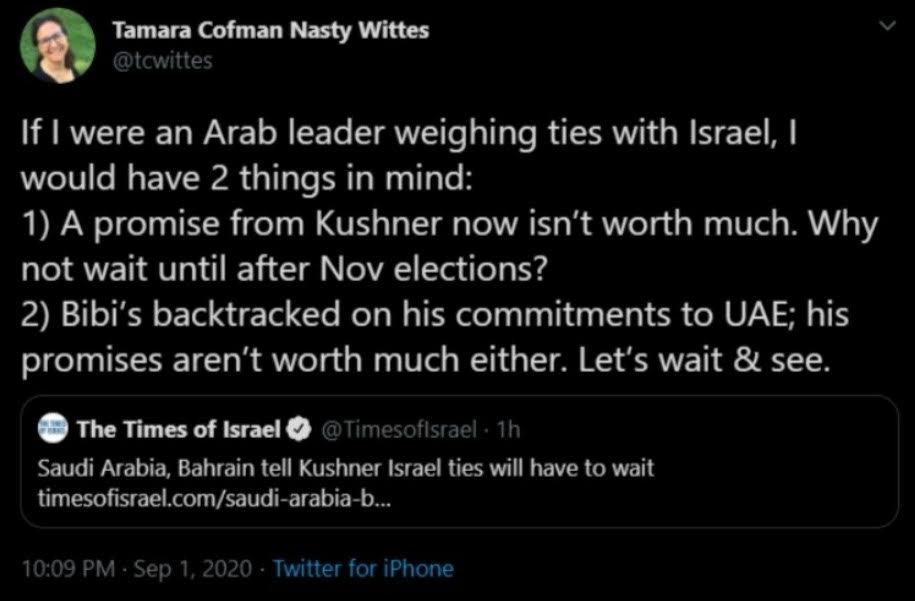 Wittes argued that the several Gulf states taking steps toward normalization with Israel were engaged in a "betrayal of Palestinian interests" and the agreement would make it more difficult to extract Israeli concessions in return for a peace deal with the Palestinians.

She went so far as to blame Gulf states that joined the Abraham Accords with Israel for the May 2021 war between Hamas and Israel.

"The risk now is that Arab states that normalised with Israel bought this mess and now have to live with it," she told the Independent.

Notwithstanding her extensive writing and tweeting on the subject, Wittes told the Washington Free Beacon days before her confirmation hearing that she supports the Abraham Accords.

"I have never expressed ‘strong opposition to the Abraham Accords,’" Wittes said. "I support the Accords and the profound transformation they have wrought."

"When the Accords were announced in September 2020, I told the New York Times that ‘Abu Dhabi and Jerusalem each had their own good reasons for finding a way to open the door to formal relations,’" Wittes said.

She also noted that her last column for the Brookings Institution said that the Accords "strengthened the pro-American coalition in the region and created opportunities for Arab states and Israel to pursue mutually advantageous security, economic, and social projects."

The Abraham Accords also happened to draw opposition from Qatar, whose funding for Hamas and the Muslim Brotherhood has put it at odds with both the Jewish state and the United Arab Emirates.

Wittes also highlighted claims that the Qatari government -- which has been accused of widespread human rights violations, including jailing protesters and maintaining abusive workplace conditions for migrant workers - supports human rights and tolerance.

"Qatar deputy PM says Islam, like West, embraces human rights because they're to benefit of all, esp non-Muslim minorities in Muslim World," Wittes wrote in 2013.

"Doha’s become global gathering place for dialogue!" she wrote in one 2012 post, adding that Brookings "has partnered w/ Qatar many years."