Oops! The Internal Revenue Service is typically in the business of taxing the rich, but two Republican megadonors were surprised in May to find $1,400 payments from the tax man deposited directly in their bank accounts—coronavirus stimulus payments gone awry, people close to those donors tell the Washington Free Beacon.

The payments were accompanied by a letter from President Joe Biden outlining the perks of the American Rescue Plan. "I am pleased to inform you that because of the American Rescue Plan, a direct payment of $1,400 was issued to you by direct deposit," the letter reads, noting that the legislation also "extends unemployment insurance and helps reduce your healthcare premiums."

The letter, shared with the Free Beacon, was mailed to one of the billionaire donors at his Palm Beach address, and followed on his receipt of the funds—as well as two payments that landed in his wife's bank account. The Free Beacon has redacted personal information from the letter posted below. The town of Palm Beach, Fla., with an average household income of $314,090, ranked 18th on Bloomberg's annual list of the wealthiest cities in America. 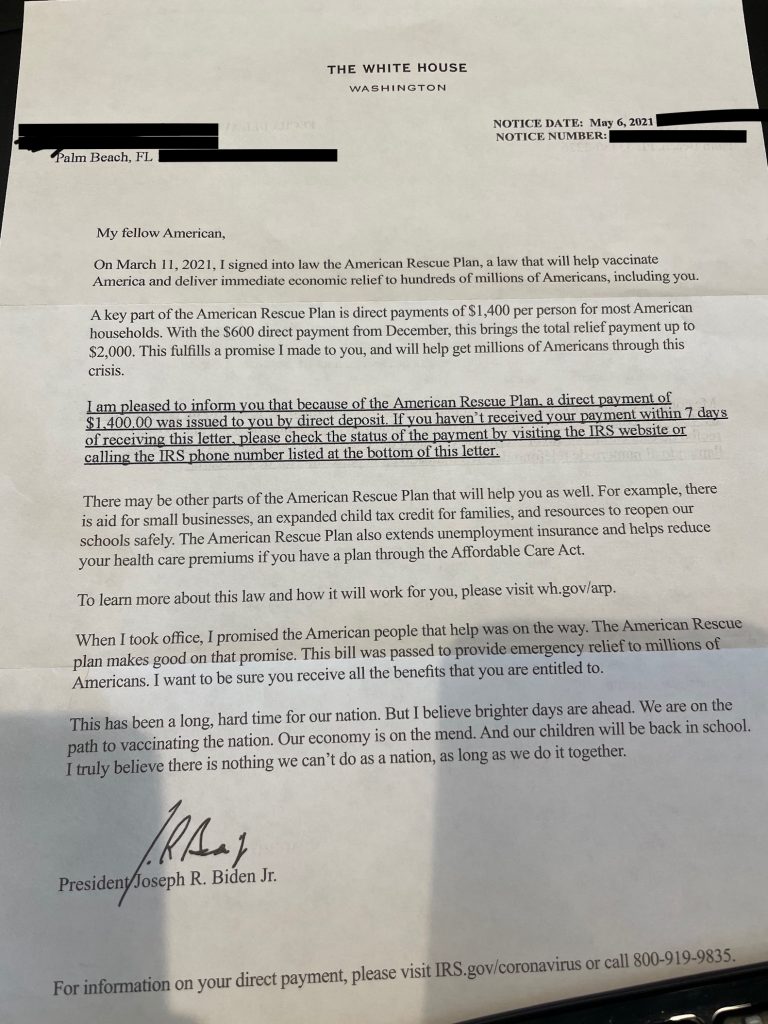 The American Rescue Plan, signed into law in March, provided stimulus payments for individuals earning $75,000 or less and $150,000 for married couples, and payments were based on adjusted gross income reported in 2019 and 2020 tax returns.

"This historic legislation is about rebuilding the backbone of this country and giving people in this nation, working people, middle-class folks, people who built the country, a fighting chance," Biden said before signing the bill.

News of the IRS's misfire comes as officials at the agency are suspected of leaking tax returns of the country's wealthiest citizens, a violation of federal law. A series of ProPublica reports has detailed what the very rich do—and don't—pay in federal income taxes, which is often negligible because much of their wealth lies in assets and investments.

The IRS did not respond to a request for comment.