We do have enough

The liberal elites are at it again, attacking a successful black man for daring to have an opinion they don't like.

Herschel Walker, the Republican Party's candidate for U.S. Senate in Georgia, is being assailed for criticizing the so-called Inflation Reduction Act. The partisan legislation won't reduce inflation but will spend $80 billion to expand the IRS and billions more to combat so-called climate change. That is why mainstream journalists have stopped calling it the Inflation Reduction Act. It is now the "massive climate, tax, and health bill." Walker is not a fan.

"They continue to try to fool you like they are helping you out. But they're not. They're not helping you out because a lot of money, it's going to trees," Walker said at a campaign event near Atlanta. "Don't we have enough trees around here?"

Walker's comments unleashed a torrent of racially charged hate. "Scientists have long debated whether a human body could survive without a brain, and Herschel Walker is now providing that answer," wrote the Palmer Report, a left-wing website. Democratic campaign operative Jon Cooper wondered if there was "something seriously wrong" with the candidate. "No one this ignorant should be anywhere near the Senate," wrote Hollywood actor Ken Olin.

These comments, among many others, help to reinforce America's structural white supremacy by invoking harmful racial stereotypes about the intelligence of black men. Elite liberals have a history of trying to undermine the credentials of successful black men. Dr. Ben Carson, Sen. Tim Scott (R., S.C.), and Supreme Court justice Clarence Thomas have also been shamelessly targeted by libs.

Stoking racial prejudice by questioning a black man's intelligence is a common left-wing tactic designed to thwart debate and erode democracy. Walker's critics are reluctant—afraid perhaps—to engage the substance of his remarks. Wonder why?

It probably has something to do with the fact that Walker is right. According to the results of a Washington Free Beacon analysis, we do have enough trees around here, and Democrats are constantly trying to fool you like they are helping you out. "Yes, you heard me right," Walker tweeted in response to his racist critics. "Joe Biden and [Rev. Raphael Warnock] are spending $1.5 billion on ‘urban forestry' and raising taxes on those making under $200k to pay for it. Yes, I have a problem with that."

The arrogance of urban-dwelling liberal elites knows no bounds. Of course they would assume that they know more about trees than Walker, who was raised in Wrightsville, a small blue-collar town in central Georgia surrounded by trees. They don't just look down on him because he's an "ignorant" black man. They also despise the fact that he attended a state school—the University of Georgia—on an athletic scholarship no less. They are terrified at the thought of anyone who isn't an Ivy League grad school nerd being in charge of anything. They didn't even want Joe Biden to be president. They embraced him reluctantly after Elizabeth Warren and Pete Buttigieg flamed out.

The Free Beacon doesn't care about the racial and class biases of liberal elites. We care about the truth. As it turns out, the truth is on Walker's side. According to Treehugger.com, there are roughly 230 billion trees in the United States. That's almost 700 trees per person. Isn't that enough? Most of Walker's critics probably assume that trees are declining in number, but the science says otherwise. In fact, there are more trees in the United States today than there were 100 years ago. Maybe Walker's critics should spend less time tweeting and more time learning.

Walker is a football legend, obviously, but he's new to politics. His campaign has suffered as a result. The Free Beacon would humbly suggest that Walker abandon his entire platform and start running on a single issue: getting rid of all these extra trees. It might not be enough to win a seat in the Senate, but a strong finish would make Walker the prohibitive frontrunner to run the Environmental Protection Agency in a second Trump administration. How refreshing it will be to have the actual experts back in charge. 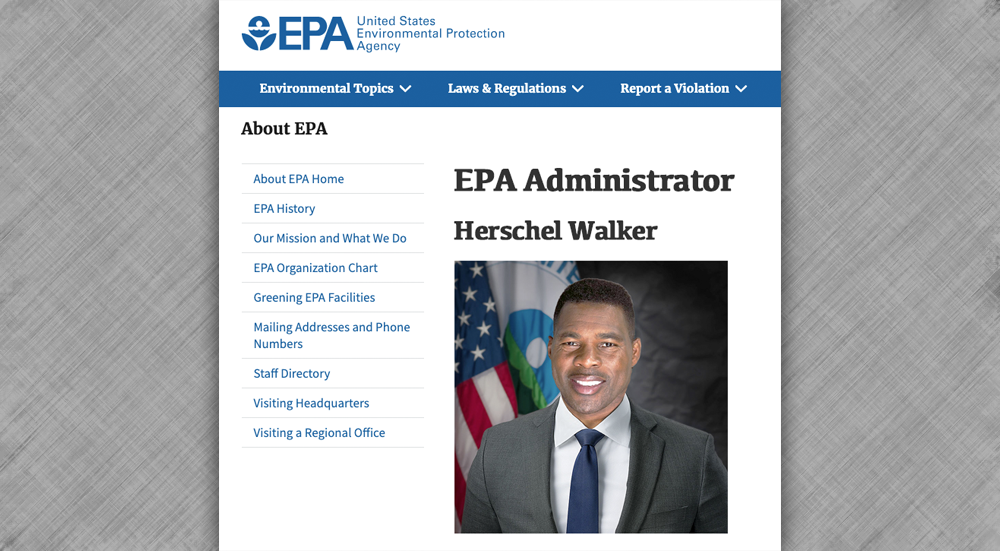