Warren Attacks Facebook as Her Campaign Continues to Use Its Tools

As Elizabeth Warren tangles with Facebook CEO Mark Zuckerberg, her presidential campaign continues to use a Facebook tracking tool to quietly record the behavior of its website visitors.

Zuckerberg pledged to "go to the mat" to fight Warren's plan to break up the social media giant during an internal Facebook meeting. Audio of the meeting released Tuesday set off a flurry of barbs from the Democratic frontrunner. In a Facebook post, Warren pledged to fix the "corrupt system" that allows the tech company to "stomp on consumer privacy rights."

Warren's plan to combat Facebook is outlined on her campaign website. The same website, however, contains a hidden Facebook tool called a pixel that enables the campaign to track visitor's web behavior so it can better target them with ads later.

There is no notification on Warren's site that a Facebook pixel is installed, but they are easily detected using browser tools such as Ghostery or Facebook's own "Pixel Helper" plug-in. A Tuesday evening visit to ElizabethWarren.com revealed that Facebook's tracker was one of many placed on the site by her campaign. 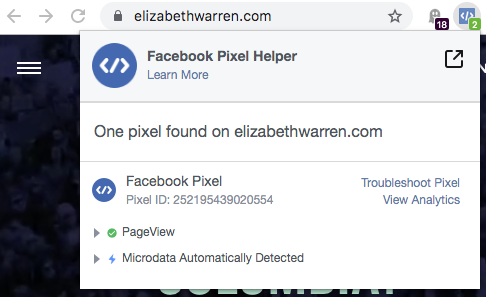 The Facebook pixel is a tool that allows advertisers to track information such as how many people are reaching their website from Facebook and what they are doing once they get there. Advertisers such as Warren's campaign can then use the information to target specific audiences with different messages.

Facebook does not place pixels on individual websites. It is up to website developers to install the tracking device in its code.

Warren's campaign did not respond to a request for comment on whether she was aware the pixel is on the campaign site.

Warren's campaign has thus far this year spent $2.7 million on Facebook ads, according to ad spending numbers recorded by Bully Pulpit Interactive's 2020 Campaign Tracker. Of candidates still in the race, only Sen. Bernie Sanders (I., Vt.), South Bend mayor Pete Buttigieg, and Tom Steyer have spent more to advertise on Facebook, according to the site.

Facebook's ad library for Warren contains roughly 23,000 ads she's posted. The page shows she has spent $285,927 on Facebook ads in the last seven days alone, the fourth highest spending figure of any page on the platform.

NetChoice, a coalition of tech companies that includes Facebook, pointed to Warren's use of the platform's tools as an example of "political hypocrisy."

"This is a perfect example of Sen. Warren using Facebook for her own personal gain while railing against it publicly," said Carl Szabo, the coalition's vice president and general counsel.

"Candidates continue to lean heavily on the connectivity social platforms provide, yet still use them as a political tool to get a headline or deliver a talking point," Szabo said. "It’s evident Facebook and other platforms provide a vital service to campaigns and voters, and Warren’s campaign utilizing social platforms to reach voters is a perfect example of this fact."

Warren said in March she hoped breaking up big tech companies like Facebook "put pressure" on them "to be more responsive to user concerns, including about privacy."

In her proposal to break up Facebook, she says the company has "bulldozed competition" and "used our private information for profit."

Use of Facebook pixels by political campaigns who advertise on the website is not uncommon—each of the above mentioned candidates has one built into their own site—but it has come under criticism by many of Warren's Democratic colleagues in the U.S. Senate.

When Zuckerberg testified to Congress in April 2018, many Democrats complained to him about the fact that ads appeared to be catered to them based on their web activity—exactly the type of targeting the pixel allows advertisers to do. Each of the senators who complained about the tracking had a Facebook pixel on their campaign website.

Tech industry insiders at the time complained that Democrats were accusing Facebook of wrongdoing as they utilized its most helpful tools.

Zuckerberg, in audio tape released Tuesday, said he would likely sue the government if Warren were elected and attempted to enact her plan against Facebook.