The CEO of Shadow Inc. urged his Twitter followers to "plan ahead" even as his tech firm's app derailed the Democratic Iowa caucus.

Gerard Niemira protected his Twitter account after Shadow's Iowa caucus reporting app failed due to multiple glitches Monday, leaving the winner of the caucus unknown as of Thursday. Despite these measures, social media users could still see the CEO's banner image, a humorous cross-stitch pattern in which the phrase "Plan Ahead" fails to fit in a box it was intended for. 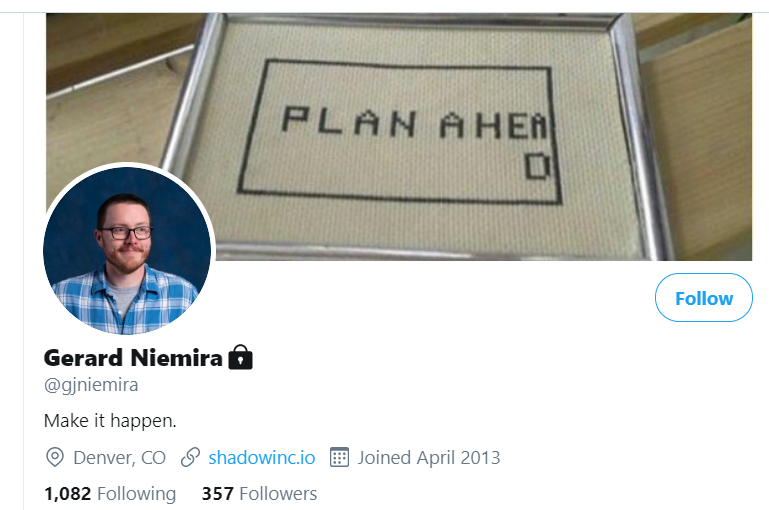 Niemira's LinkedIn account links to the @gjniemira Twitter account and uses the same profile picture, indicating the account is genuine. While the image remained visible as Iowa party officials scrambled to tally votes on Tuesday, Niemira has since taken the Twitter banner down.

Tech experts who examined Shadow's app told NBC News that it suffered from a flaw that kept results from being properly transmitted, as well as an unfriendly user design that led many caucus chairs to give up and report the results by phone. "The app appears rushed," said one expert. "Someone was not paying attention or on a deadline."

Niemira apologized personally for the app's failure. "I'm really disappointed that some of our technology created an issue that made the caucus difficult," he told Bloomberg in an interview. "We feel really terrible about that."

He continued to defend the product even as it melted down in front of a national audience.

"The app was sound and good," he said. "It did the job it was supposed to do, which is help precinct chairs in the field do the math correctly."

Before joining Shadow, Niemira was chief operating officer at ACRONYM, a Democratic dark money group that launched the tech firm in 2019. ACRONYM has since distanced itself from its own creation, purging its website of all references to having "launched" Shadow. The firm now claims it merely "invested" in the app.