Trump retweeted a tweet from a supporter Saturday denying that Epstein committed suicide and claiming that the billionaire financier "had information on Bill Clinton & now he's dead." The Monday Morning Joe panel condemned Trump for spreading the conspiracy, which has no basis in fact.

"And then the president caps all that off by accusing the Clintons of murder. It does just seem to keep getting worse and the president seems to become more and more unbalanced," he concluded.

But Scarborough engaged in the exact same behavior the morning of Epstein's suicide, pointedly suggesting in tweets that the manner of his death was "predictably Russian" and sarcastically saying "How convenient for a lot of rich and powerful men."

Authorities couldn’t keep Epstein alive by putting him under 24 hour surveillance? How convenient for a lot of rich and powerful men.

A guy who had information that would have destroyed rich and powerful men’s lives ends up dead in his jail cell. How predictably…Russian.

He reportedly tried to kill himself two weeks ago. And is allowed to finish the job now? Bullshit.

Powerful Democratic and Republican figures breathing a huge sigh of relief—as well as a Harvard professor or two. 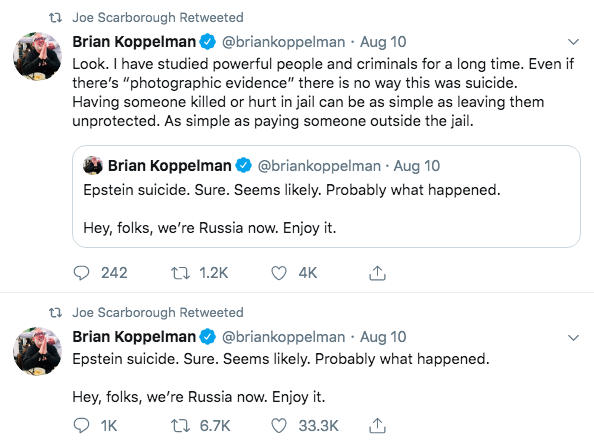 After other journalists called out Scarborough for his baseless conspiracy-mongering, Scarborough indicated that it was just "a glib tweet of mine while drinking coffee" and his intention was to mock the Clinton murder conspiracies of the '90s. When CNN's Andrew Kaczynski asked why he then retweeted individuals genuinely suggesting a conspiracy theory, Scarborough replied by correcting his grammar.

Andrew, I never realized that a glib tweet of mine while drinking coffee would be taken by you as the inerrant word of God. Lighten up. The tweets following mocked conspiracy theories of the 90s and the New York Mets’ 9th inning comeback. Relax. https://t.co/oQD5eQAWc2

"Is as irresponsible as it gets?" Go outside and get some fresh air today. Get off Twitter, which is what I did after finishing my coffee. That’s why I’m just now seeing your hyperventilating tweet.

Glenn, forgive me for making a glib, offhanded comment while, yes, also poking fun at crazy conspiracy theories that Republicans tried to pin on Clinton in the 90s. I didn’t know you would interpret my glibness with the intensity of the Dead Sea Scrolls scholar.
Relax, buddy. https://t.co/foS2rbRkMt

Andrew, you really need to relax, learn how to apply context, and also learn how to use the word "their". Your self-righteousness and hysteria over a passing tweet is something. And if anybody at my network has a problem with a tweet, they’ve got my number. https://t.co/F4sAsqOmNx