Rena Marrocco, a Democratic donor and delegate, said Thursday that Secretary of Education Betsy DeVos "deserves" to be the prisoner of a sadist, rapist character on HBO's "Game of Thrones."

Marrocco posted an article on her personal Facebook page about DeVos flying her private jet for work-related travel, in which she castigated DeVos, calling her "human pollution."

"This woman is just human pollution. She's pollution to our education system and our planet. She's an evil self-absorbed princess who deserves to be a prisoner of someone like Ramsay Bolton," Marrocco wrote, referring to the "Game of Thrones" character known for raping and torturing women for sport. 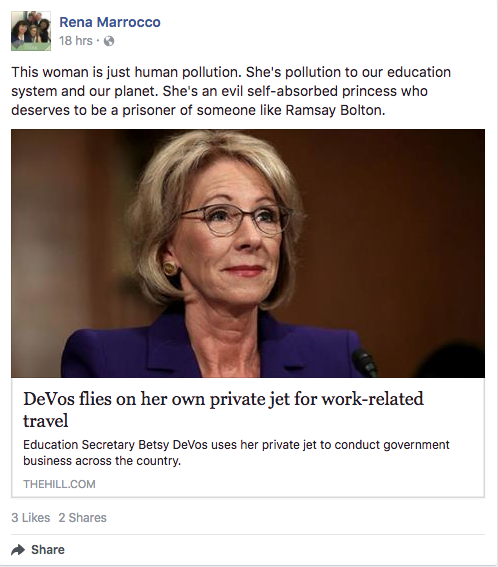 Marrocco donated nearly $2,500 to Sen. Bernie Sanders (I., Vt.) during the Democratic presidential primary between 2015 and 2016. She also donated $2,700 to Sen. Kamala Harris's (D., Calif.) campaign, which is the maximum amount donors can give per election cycle to an individual candidate.

The article Marrocco shared from the Hill was initially entitled "DeVos uses private jet for work-related travel,"  and its misleading nature was criticized on Twitter. DeVos has used her privately owned jet to travel, which she independently pays for, not the taxpayer.

You have to click to find it it’s her own jet, and she, not the taxpayer, picks up the bill. https://t.co/Ji0rGO0Esb

The Hill later changed the headline to "DeVos flies on her own private jet for work-related travel."

WATCH: Confused Old Codger Joe Biden Will Agree to Anything