I watched 'Mayor Pete,' the Pete Buttigieg documentary on Amazon Prime, so you don't have to

If political consultants only made money by being good at their jobs and winning elections, you'd almost feel sorry for the people advising Democrats over the next couple of years. President Joe Biden is increasingly unpopular thanks to a listless economy, is almost certain to lose his congressional majority in 2022, and is merely the betting favorite to win his party's nomination in 2024. Democrats are increasingly divided but can all agree that Donald Trump is an existential threat to democracy and all things good, which is why they desperately want him to run again. What could go wrong?

Mayor Pete, the Amazon Prime documentary about Transportation Secretary Pete Buttigieg's distant fifth-place finish in the 2020 Democratic primary, is at least somewhat relevant to the party's future in that it invites viewers to examine the question: "Is Pete Buttigieg still ruthlessly determined to be president someday?" It's a question answered by the film's mere existence, never mind the fortuitous timing of its release, just days before a series of Kamala Harris hit pieces challenged her status as Biden's presumed successor.

The documentary follows Buttigieg's improbable rise to brief relevance in the Democratic primary, fueled by his remarkable ability to remind journalists and other college-educated white liberals of themselves. Blending behind-the-scenes footage from the campaign trail and fixed-camera shots of Buttigieg contemplating his own significance, Mayor Pete tells the tragic tale of a relentless overachiever forced to confront the fact that his life's goal is not a homework assignment he can ace by doing all the reading and writing a powerful essay.

When talking directly into the camera, Buttigieg professes disillusionment with the theatrics of modern politics. "The challenge, of course, is how do you master the game without it changing you?" he tells the film's producers. On severals occasions, top strategist Lis Smith berates the candidate for his subpar political theatrics. Buttigieg's dry professorial style makes him sound like "the fucking Tin Man" "reading a fucking shopping list."

When the cameras are rolling in the background, however, we see a candidate determined to win the game by doing whatever it takes. His home in South Bend, Ind., is meticulously curated for optics—a portrait of JFK and what appears to be a hunting rifle adorn on old piano. He awkwardly offers to say a blessing during brunch with Rev. Al Sharpton. (Perhaps the cameras were turned off all the other times he prayed.) He understands the need to make sure the biographical portion of his campaign message "doesn't read as very white." He obsesses over minutiae, such as whether his performance in the (very white) Iowa caucuses "shocked," "rocked," or "astonished" the political world. 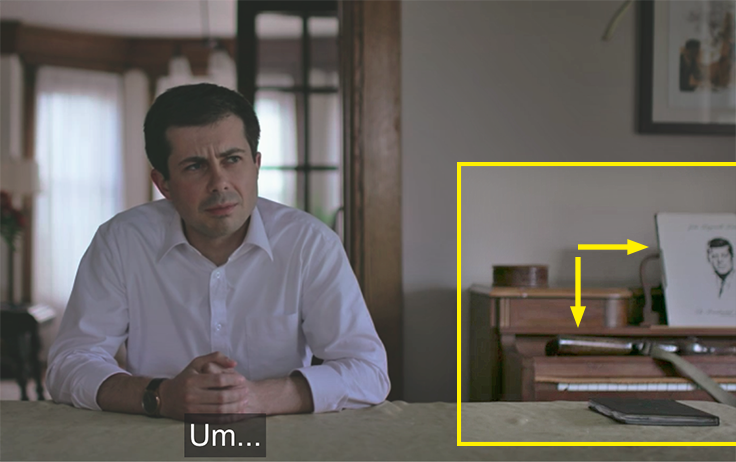 Perhaps the most revealing scene occurs moments before Buttigieg takes the stage in Iowa to declare victory even as the results are delayed by software glitches. "You're going to be the only candidate that didn't have your spouse standing next to you," Buttigieg's husband, Chasten, says in the hotel room where they've been watching rival candidates speak. Pete shrugs it off, noting that friends and family will be invited on stage at the end of his speech. He proceeds to declare victory in front of an exquisitely arranged backdrop of five black women holding American flags perfectly in frame. Chasten would definitely have ruined the vibe.

Race and sexuality feature prominently throughout. Buttigieg, who is gay, is constantly struggling to present himself as an oppressed minority while also fending off questions about white privilege and his lack of support among black voters. Chasten laments that Pete is often categorized as "just a white male" when "obviously being gay is a minority in this country." Such is the state of the Democratic Party, whose identity-obsessed overlords are increasingly out of touch with actual voters. Who's excited for the inevitable Buttigieg-Harris showdown 2028, or even 2024? (If these are the two best candidates Democrats have to offer, Republicans should rejoice.)

"I cannot express regret for my race being what it is any more than I can express regret for my sexuality being what it is," he tells a black man at a meeting of religious leaders. The cameras keep rolling after Pete leaves, and a group of attendees agree his answer was "bullshit." The cameras keep rolling when Buttigieg is forced to confront a crisis in South Bend after a white officer shot and killed a black man just days before the Democratic primary debate in Miami. The candidate touted as "the Harvard and Rhodes scholar who returned to his hometown" and preached that "you don't have to be in Washington to matter" is assailed at a town hall meeting for abandoning his constituents. "Do your job just so you can have a moral compass when you leave this place," an angry resident tells him. Buttigieg flew to Miami the next day. He lives in Washington now.

If Buttigieg didn't choose to do this to himself, you'd almost feel sorry for him. It's easy enough to sympathize with his plight. We've all wanted something so bad that we didn't really need and probably wouldn't even enjoy if we got it. Look at Barack Obama, who after eight miserable years in the White House has decided all he wants to do is get rich and hang out with celebrities. When the South Carolina results roll in—Buttigieg finished a distant fourth behind deranged billionaire Tom Steyer—the camera hovers over the dejected candidate, and we get the sense that he is this close to realizing it's just not worth it.

"Why do you want to be president of the United States?" Chasten asks. "Cause of the people," Pete mumbles back, clearly not thrilled about having to go on stage and give the final stump speech of his campaign. Alas, Ivy League ambition is a helluva drug. It was only a matter of time until Pete could convince himself once again that the world will not make sense until he's sitting in the Oval Office making small talk with the Norwegian prime minister and finalizing his list of "Top 20 Summer Reads" for the White House social media team.

Buttigieg suggests as much in the final scene before the credits role. Reflecting on his failed campaign, he says he doesn't know if he'll be president someday but insists that he "might be."

"Time is on my side," he says, ominously.