Linking to a tweet by President Donald Trump criticizing "fake news" for their initial misleading reports on the Covington Catholic teenagers, Omar wrote, "The boys were protesting a woman's right to choose & yelled ‘it’s not rape if you enjoy it.' They were taunting 5 Black men before they surrounded Phillips and led racist chants. [Nick] Sandmann’s family hired a right wing PR firm to write his non-apology."

She also linked to a story decrying "white journalists" who were trying to correct the record. She deleted the tweet Wednesday morning, after the Washington Free Beacon asked her office to comment. While mainstream outlets had ignored her tweet as of Wednesday morning, other conservative outlets had picked up on it. 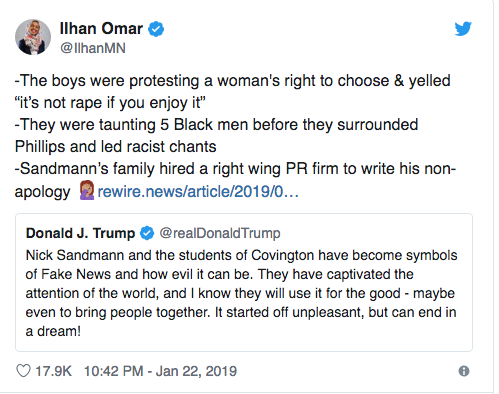 Omar claimed the Covington Catholic teenagers, initially vilified for taunting Native American elder Nathan Phillips before more videos and reporting painted a different picture, "were taunting 5 black men," when it was actually the other way around.

The "black men" she referred to were the Black Hebrew Israelites, who can be seen on video shouting racist and homophobic insults at the teenagers near the Lincoln Memorial because many of them were wearing "Make America Great Again" hats in support of Trump. The Black Hebrew Israelites are listed by the left-wing Southern Poverty Law Center as a militant hate group.

Her claim that "the boys were protesting a woman's right to choose" is accurate in that they were in town for the anti-abortion March for Life, although she seemed to imply their credibility was reduced because they have pro-life views.

One person was heard yelling "it's not rape if you enjoy it," but video shows another Covington student stating the person who yelled it didn't attend their school. The person yelling it wore a Cincinnati Bengals hat and had a University of Indiana backpack; Covington Catholic is a high school and in Kentucky.

As it stands, Omar has no proof the person who yelled it was a Covington student, and it was incorrect to say "the boys" shouted the offensive statement.

Omar's claim that the teenagers "surrounded" Phillips is also not accurate, by Phillips' own admission. Phillips' claim that the teenagers mobbed him fell apart shortly after he made that claim to the Washington Post. Video showed him approaching the boys, not the other way around. Also, he said in a subsequent interview that he went into the midst of the crowd to try to make peace between the Black Hebrew Israelites and the teenagers, something he did not mention the first time. Either way, he acknowledged his initial framing that he was surrounded as he tried to leave the area was not true.

Phillips also claimed the teenagers chanted "build that wall" at him, which cannot be heard on any video.

The viral image of him beating his drum with junior Nick Sandmann smiling a few inches from his face was enough for numerous outlets to declare the crowd of teenagers was engaging in racist taunting. Some teenagers could be seen doing a "tomahawk chop," which is considered offensive by Native Americans. However, the teens had been doing some high school cheers before that and began clapping and dancing along with Phillips' drumbeat; they claimed it was not in a mocking tone.

This isn't the congresswoman's first struggle with the truth in her brief time in office. She courted controversy earlier this month when she claimed Sen. Lindsey Graham (R., S.C.) must be "compromised" because of his support on certain issues for Trump. However, she offered no evidence to back her claim when pressed by CNN.

She also misled voters on her support for the anti-Israel Boycott, Divestment and Sanctions (BDS) movement, which she said during the campaign was not helpful for the two-state solution. After being elected, she said she supported it.

"Omar, who has made a name for herself by spouting off anti-Semitic rhetoric, lying about her support for the BDS movement and making disgusting false smears against Senator Lindsey Graham, has become one of the faces of Nancy Pelosi’s band of radical Democrats," said Michael McAdams, National Republican Congressional Committee national press secretary.

UPDATE: 11:12 A.M.: This article was updated to show Omar deleted the tweet.