NYT Writer Accuses Dem Rep of Being Bought by Bloomberg

"Everyone has a price. EVERYONE," Blow said in a now-deleted tweet. 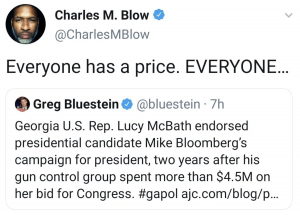 Blow was responding to a tweet from Atlanta Journal-Constitution reporter Greg Bluestein, who noted that Bloomberg's gun control group spent more than $4.5 million to help McBath unseat Rep. Karen Handel (R., Ga.) in 2018. Blow sent several tweets criticizing Bloomberg and his past support for the "stop-and-frisk" program, which gave New York police officers the authority to stop anyone they suspected of committing a crime without a warrant.

"[Bloomberg] can give money to help remove Trump and to other worthy causes. That's all good. But, I will NEVER vote for him, and I will ALWAYS remind people of the harm he caused," Blow tweeted.

Earlier in the morning, McBath took to Twitter to praise Bloomberg for helping "fight back against gun violence" and said she is "proud to stand with him in this race."

.@MikeBloomberg is the kind of fighter we need in the White House.

He’s given mothers like me a way to fight back against gun violence.

I’m proud to stand with him in this race. He will win this election, & work with Congress to pass common sense gun safety laws. #GetItDone pic.twitter.com/PpBhzHby6g

Bloomberg released an accompanying statement with the endorsement praising McBath, who ran for Congress as an advocate for gun control after the shooting death of her son in 2012.

"She showed that gun safety can help Democrats flip red districts to blue, and that's what I'm working to do all over the country in this campaign," Bloomberg said. "As president, I will work with her to pass stronger common-sense gun safety laws that the vast majority of Americans support."