Republican congressman Guy Reschenthaler says he was inadvertently given a window into the "blatant bias" in the newsroom at the Pittsburgh Post-Gazette through an email sent to his staff by one of the paper's editors.

A staffer for Reschenthaler, a first-term congressman who represents the Pittsburgh area, received the email from news desk editor Steven Sybert in reply to a press release praising the Trump administration's Affordable Clean Energy rule. Sybert, likely not intentionally, responded to the staffer in all capital letters, writing: "VOTE HIM OUT IN 2 YEARS!"

It's unclear whether Sybert was referring to Trump or Reschenthaler, but the congressman says the email, shared by his office with the Washington Free Beacon, helped confirm his suspicions of bias.

"Such blatant bias in the newsroom of a major regional newspaper is extremely disappointing, but not at all surprising," Reschenthaler said.

"This email gives the public an unintended window into the biases that influence much of the news reporting in the mainstream media," he said. "What we have suspected all along, this email has confirmed in their own words." 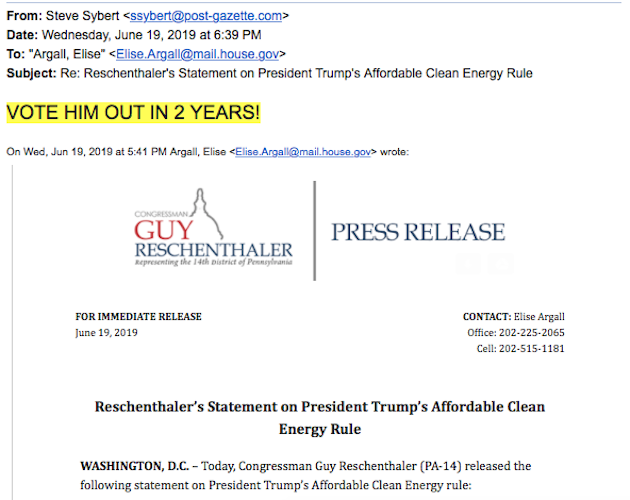 Reschenthaler also said the "incident demonstrates just how out of touch reporters and editors have become with the people and the regions they are covering."

"The mainstream media need to come down from their ivory tower, talk to real people, review their past reporting, and simply admit they are no longer a neutral arbiter of the facts," Reschenthaler said.

Sybert did not respond to an inquiry into whether the email was sent to Reschenthaler's office by mistake and, if so, whether the intended recipient was within the Post-Gazette.

Reschenthaler was easily elected in 2018, defeating his Democratic opponent in the newly drawn 14th Congressional District by more than 15 percentage points. He previously represented the area in the state legislature.

Reschenthaler praised Trump in the press release for "putting a stop to the Obama-era war on coal."

"I am grateful to President Trump for his continued commitment to Pennsylvania coal jobs and the communities they support," he said in the statement.