Massachusetts congressman and Democratic presidential candidate Seth Moulton took a shot at Pete Buttigieg during a recent interview, implying he was cooler than Buttigieg during their time as undergraduates at Harvard University.

During a Politico interview that was published on Thursday evening, Moulton was asked whether he knew Buttigieg, South Bend mayor and presidential candidate, in college.

"No. I think we hung out with different groups of friends. Not at all, I was not hanging out with the Harvard Democrats," Moulton said.

He was then asked to describe what his friend group was like.

"Athletes. People who went out and, you know, had a good time," Moulton said.

Moulton graduated from Harvard in 2001 and would later return in 2008 to complete a three-year joint M.B.A.-M.P.A. program after serving four tours in Iraq as a U.S. Marine. Buttigieg served as a board member of Harvard College Democrats and was active in protesting the war in Iraq as a student before graduating in 2004. He would later serve as an intelligence officer in the Navy Reserves for six years, along with a six-month deployment to Afghanistan.

Moulton is currently polling at less than 2 percent among more than 20 Democratic candidates and failed to qualify for the first debate last month. The Massachusetts Democrat said he would continue running for president even if he doesn't qualify for the CNN debate on July 30 and 31.

"As long as I think I can win, I'm going to stay in the race," Moulton said. "If I get to a point where I say, ‘You know what, I still think I might be the best nominee, but it's not going to happen' … then I think I have a moral obligation to get out."

While Buttigieg is polling at 7 percent in a new NBC News/Wall Street Journal poll, he is facing an uphill battle as he faces backlash from South Bend's black community over his handling of police misconduct cases and the lack of diversity on the South Bend police force. 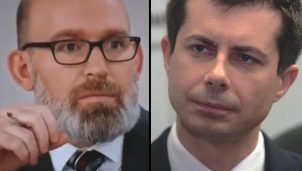