Marco Rubio Wants to Save the American Dream

Rubio on why work is stagnating, and how to bring it back

In 1956, amidst the fitful days leading up to the revolution, Sen. Marco Rubio's parents left Cuba for the United States. Arriving here, they joined the wave of immigrants who would eventually populate Miami. Both took up jobs in the service industry: Mario Rubio as a bartender in hotels, and his wife Oriales variously as a maid, cashier, and stock clerk.

This work, although less than glamorous, was enough to provide a middle-class lifestyle, even for a family of new immigrants raising four kids.

"With those two jobs, my parents owned a home, and had a stable home life, and owned a car, and we took not luxurious vacations, but good vacations as kids, and they were able to retire with dignity," Rubio said in an interview with the Washington Free Beacon.

To that list, of course, should be added their other big achievement: raising the man who would go on to be Speaker of the Florida House of Representatives, a United States senator, and a serious contender for the presidency. Along the way, Rubio has frequently invoked his family's story, painting himself time and again as the image of the American dream.

It is this dream—that anyone who works hard can make a good life for himself and his family—that Rubio now fears is in danger.

There is a lot of evidence that he is right: even as unemployment hits record lows and gross domestic product grows steadily, many Americans chafe under the effects of stagnant wages and a shrinking middle class. They now choose smaller, later families, fearing the ever-growing cost of home life, especially for those not lucky enough to live in increasingly concentrated urban wealth hubs.

Much of this is hidden by the current economic boom, but deeper trends give policy makers pause for concern. Cyclically low unemployment rates obscure low-status men's steady labor force drop-out. Millennials expect to be less well off than their parents, as those outside the high-productivity class struggle to meet previous generations' living standards. And this coming apart has profound socioeconomic consequences, as an alienation from productive work and middle-class family life is doubtless tied up with the surging overdose and suicide crises.

Many of Rubio's colleagues in the Senate have been slow to respond to these new problems. Solutions come in the expected forms, whether cutting taxes or enormous new spending programs. But Rubio has chosen to carve a path of his own, asking how conservative policy can help. The Free Beacon spoke to the soon-to-be-senior-senator from Florida about what he thinks explains the new shape of the American economy, and what we can do to preserve the American dream into the tumultuous 21st century.

In Rubio's view, our current situation is intimately linked with how the economy has been reshaped since the new millennium. Earning gains have largely gone to high-skill, high-productivity jobs, like those in tech and finance.  Meanwhile, Americans who work in lower-skill sectors—which have been the foundation of the middle-class prosperity Rubio's parents enjoyed—have stagnated. 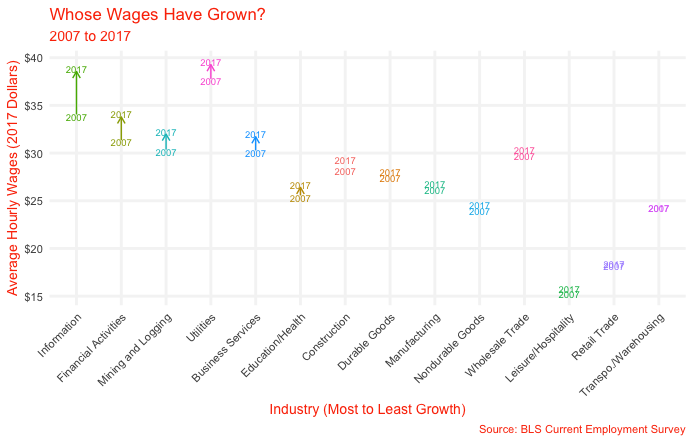 "Growth in a 21st-century economy does not distribute the way it did in a 20th-century economy," Rubio said. "The architecture of the economy has fundamentally changed.  It's not a function of greed, or people keeping things from others. It's simply that the architecture of our economy is such that even robust growth does not evenly distribute the way it once did as a function of what the economy is structured as. It concentrates in certain jobs, certain professions, and certain industries, and even certain geographic areas, but still leaves others behind."

The result is that the inclusive growth which Rubio's family enjoyed has become increasingly exclusive. Even as the economy roars, more and more people feel left behind. What is more, Rubio argues, the implications are not merely financial, but cut to the heart of Americans' abilities to create a meaningful life for themselves.

"One of the institutions that holds a nation together and gives people their identity—a shared identity, gives people a sense of belong—the dignity of work, is under threat. Work, and the dignity of work, not to mention the importance of family and community that flows from those two things. These things are more than just about economics. They're about the character of a nation, the identity of a nation, and its soul and health, in terms of our ability to get along with one another," Rubio said.

In all of this, Rubio sees a failure of policy makers—not in failing to steer the economy, but in failing to respond to how the economy has steered itself. There has been a belief, he argues, that "somehow economic growth alone, without addressing the structural changes in our economy would result in the same things we used to see in the previous era." (This view which has come increasingly under attack from a number of heterodox voices on the right.)

Rubio, meanwhile, has been quietly pushing the policy envelope. Last year he and colleague Mike Lee (R., Utah) secured a partial expansion of the child tax credit as part of tax reform (although the credit did not grow as much as the two would have liked). And in August, he debuted a proposal for universal Paid Family Leave, funded by allowing new parents to draw on their Social Security entitlements.

Both of these proposals are about supporting working families, who suffer under surging childcare costs. But they are also opening volleys in a broader policy push focused on supporting, rather than limiting, dignified work and the ability of Americans to build a middle-class life.

To do so, Rubio argues, we need to build a workforce adapted to the 21st century, something our "archaic" education system isn't equipped for—"it's entirely built on the economy of the past," he says. A traditional four-year college education is fine for the 20 percent of students who transition smoothly from high school to college to a job. But as the college-wage premium grows ever wider, American workers who will not or cannot make it through college need alternative training.

Rubio thinks the answer to this problem is alternative accreditation: making it easier for Americans to acquire skills from vocational education, trade school, or through a combination of educational experiences upon which a government imprimatur can be placed.

"The ability to combine life experience, work experience, online course work, and maybe in-class coursework at a couple of different places, maybe a couple of unpaid internships: sort of package all of that, cumulatively, into something that's the equivalent of what today we call a college degree," Rubio said. "We need an entity that has the trust of the private sector that can accredit all that learning into something that equates a college degree or higher education."

The additional benefit of this model is that it makes it much easier for older Americans to reskill—an increasingly urgent issue as technology becomes a more and more dominant feature of high-earning sectors. In fact, supporting older learners, who may have a family, is part of the goal of policies like PFL or the CTC—all of these issues flow together.

While American workers need to adapt to the new economy, Rubio argues, so too do American companies. In a recent Atlantic essay, he heralded the tax reform bill, but emphasized that a corporate tax cut only transforms into benefits for American workers under certain circumstances.

"There is a reality that there are many companies, headquartered in the United States, addresses in the United States, who exist as a result of American freedoms, but largely are making profits by moving investment and production overseas," Rubio told the Free Beacon. "And that needs to be acknowledged."

To address this, Rubio wants to make permanent the full expensing provisions of the TCJA, which permit businesses to deduct capital expenditures from their taxable income. Doing so will promote investment in America, rather than in stock buybacks or outsourcing. The Tax Foundation has estimated that making full expensing permanent (rather than allowing it to expire) would mean a 0.9 percent larger economy, 0.8 percent higher wages, and 172,300 additional full-time equivalent jobs.

At the same time, Rubio is concerned about ensuring better protections for workers. In the Atlantic, he discussed the importance of imagining how to reinvigorate private sector unions; and in speaking to the Free Beacon, he said that he was interested in the spread of non-compete agreements into low-skill industries. A recent study found that nearly 40 percent of workers had ever signed a non-compete—the authors described the agreements as "surprisingly common in low-skill, low-paying jobs as well as in states that do not enforce them." Rubio fully intends to look closely at this practice in the new year.

Rubio's economic thinking is broad, and often heterodox; the influence of prominent "reformicons" like Oren Cass is apparent. Some may find certain themes, such as his emphasis on unions, for example, or his skepticism of multinationals who house American dollars abroad, surprising from a devout conservative.

But at a time when conservatism is as in flux as the structure of the economy, one central, and undeniably conservative, principle animates Rubio's vision.

"This isn't just about economics," Rubio said. "This isn't just about the size of our gross domestic product. If you look around America, one of the challenges we face is there is a growing number of Americans who lack a sense of identity or feel a loss of identity or a loss of belonging, a sense of belonging. We used to fill that blank with our identity … that came from the dignity of being employed, and being valued for the work you did, and having a reason to get up every morning and go somewhere for the value that mattered."

"And so, when you strip out dignified work, when people struggle to find dignified work, it doesn't just challenge their pocketbook," he said. "It challenges their identity, their sense of belonging. It has a corrosive impact on the human spirit, and ultimately on our communities, our families, and then our country."