A majority of the money sent from Harris's campaign went toward digital web advertisements despite her reelection efforts being years away.

Harris, who is regularly floated as a possible 2020 Democratic presidential candidate, uses Revolution Messaging LLC, a Washington, D.C.-based progressive online media firm that won numerous awards for the work it had done for Sanders, including web advertisements, campaign consulting, videography, and website services.

During the first three quarters of 2017, which spans from Jan. 1 to Sep. 30, Kamala Harris for Senate disbursed $652,704.79 to Revolution Messaging with $567,487.2 of this amount going towards web advertisements, according to records.

Harris's campaign dramatically increased its expenditures to the firm during the fourth quarter, reporting disbursements of $513,866.60 for digital web ads from Oct. 1 to Dec. 31.

More than $22,000 was put towards campaign consulting while $12,000 went towards website services the last three months of 2017, the campaign's newest disclosures show.

In total, Harris's campaign disbursed $2,061,069.45 last year, with the $1.2 million to Revolution Messaging accounting for nearly 60 percent of its expenditures.

"Kamala Harris is dead set on running for president and the fact that she's spending seven figures to grow her name ID nationally puts to rest any speculation to the contrary," a presidential campaign veteran told the Washington Free Beacon. "She knows that there is going to be a crowded Democratic primary in 2020 with figures who have a national presence, so she needs to be spending money now to get her name in front of left-wing activists so she's not an afterthought when the campaign kicks off."

"Given that she doesn't have to run for reelection for Senate again for another five years, the only reason her campaign committee would be spending so much now, instead of building a war chest, would be to boost her ahead of a possible presidential run."

Harris's campaign did not return a request for comment on the money spent on the media firm by press time. 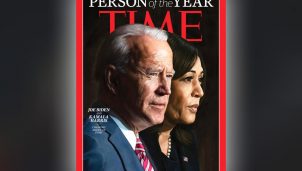 Trump and Other Real Heroes Snubbed as Biden, Harris Share ‘Person of the Year’ Honors