At least 1,560 people were sent to state prisons for marijuana-related offenses between 2011 and 2016

Sen. Kamala Harris (D., Calif.) admitted in an interview this week to using marijuana, an act that landed thousands in prison while she was California's Attorney General and opposed legalization of the drug.

The drug use admission to the "Breakfast Club" came as part of Harris' attempt to erase the reputation she earned as a California prosecutor. She is now calling for legalizing marijuana as a first step to end the War on Drugs, but opposed marijuana legalization during both her 2010 campaign for Attorney General and 2014 re-election campaign, when she notably lost support from the marijuana industry after she laughed at her Republican opponent for supporting legalization.

Possession of small quantities of marijuana (up to an ounce) for personal use has been decriminalized in California since 1975. However, sales of the drug remained illegal until 2018, when the commercial licensing portion of Proposition 64—the ballot measure that legalized weed state-wide—was implemented. That means that the state still arrested, prosecuted, and imprisoned people for marijuana-related offenses.

The California Attorney General's office does not provide organized, publicly available data on annual prosecutions. When contacted by the Free Beacon, it could only point to its OpenJustice data portal, which reports only limited data sets. However, the California Department of Corrections and Rehabilitation does provide data on the total number of admissions to state prisons annually, in its "Offender Data Points" series and the now-discontinued "Characteristics of New Admissions" series.

These reports provide information on new admissions (as opposed to parole violators) to the California state prison system, including by offense type. Based on these reports, at least 1,560 people were sent to state prisons for marijuana-related offenses between 2011 and 2016. 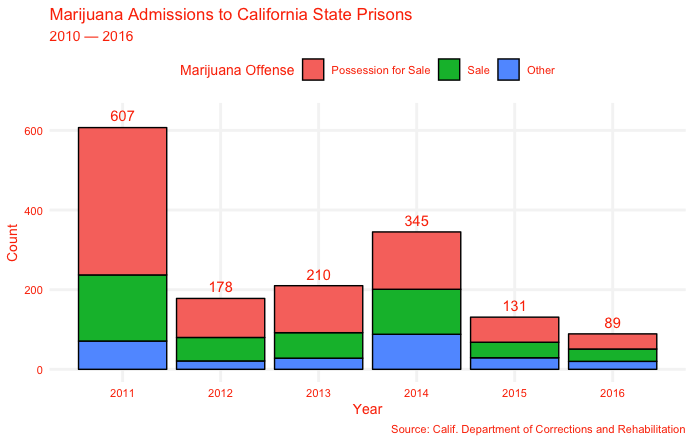 Importantly, this figure is necessarily an undercount of the total number of people actually prosecuted for marijuana offenses during Harris's term as Attorney General. The sharp decline between 2011 and 2012 is not a reflection of leniency on Harris's part, but because of something called Public Safety Realignment.

A federal court found in 2011 that California's state-level prisons were dangerously overcrowded, ordering it to reduce populations to more manageable levels. To do so, the state began filtering many lower-level offenders—including drug offenders—into county jails, meaning that they dropped out of state-level totals but were still incarcerated.

Under realignment, "most lower-level offenders with no record of sexual, violent, or serious crimes now serve sentences in county jail or under county probation supervision," the Public Policy Institute of California noted in 2015.

County-level populations ticked up following realignment, but no data source breaks those figures down by offense. As such it is not clear how many additional marijuana offenders were prosecuted under Harris and then diverted to county jails. As a result, 1,560 is the lower bound of individuals sent to prison by Harris for marijuana from 2011 to 2016.

Harris said during her interview with the "Breakfast Club" that she supports legalizing marijuana because "it gives a lot of people joy, and we need more joy."

She also pushed back against those who say she opposed legalization. "That is not true," Harris said. "I joke about it, but half my family is from Jamaica. Are you kidding me?"

Many are also questioning whether she was being honest about the timeframe of her drug use. When she was asked what kind of music she listened to during her smoking days in college, she named two artists—Tupac and Snoop Dog—who weren't making music until long after she graduated.

"Either Harris was baked enough to time travel or she hit the bong after being in school," wrote Nick Gillespie for Reason, a libertarian magazine that supports marijuana legalization. "Not cool for a candidate whose slogan is ‘speaking truth, demanding justice.'"