David Brock has made a career out of defending Bill and Hillary Clinton from attacks but John Podesta, who has been a top Clinton adviser for decades, still can't stand the guy.

Brock began his career investigating the Clintons and then transitioned into one of their most die-hard defenders. In private emails released by Wikileaks, it is evident that Brock has failed to win over Podesta.

Here is some of the proof:

Brock Begs For In-Person Meeting, Doesn't Get It

In April 2008, Brock was in D.C. for a few days and asked whether Podesta wanted to meet up "for coffee or a drink." Podesta instead suggested that they "try to talk on the phone," which prompted Brock to beg for some face-time.

"Don't you think it would better if we found a time to just sit down and talk?" Brock wrote. "I know we both have busy schedules but if you want to let me know what works for your schedule I'm sure we can figure out a good time."

"I'm out of town," Podesta replied. 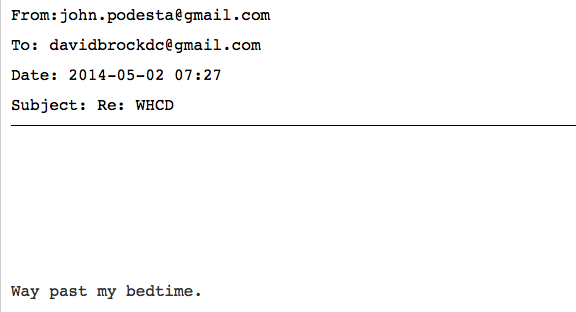 In May 2014, Brock invited Podesta to come to an "After After Party" for the White House Correspondents’ Dinner.

"Way past my bedtime," Podesta wrote.

Podesta Bails on Brock Book Party, Says He "Only Cooks for Hillary" 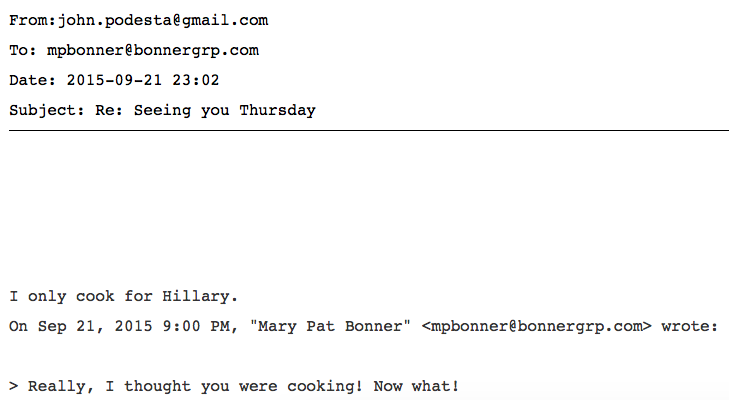 In September 2015, Podesta bailed at the last minute on a book party for Brock that was being hosted at the house of his brother Tony Podesta.

"Hadn’t heard back and wanted to send you another quick note about the book party this Thursday evening to celebrate the release of David Brock’s new book—Killing the Messenger," Mary Pat Bonner, a major Democratic fundraiser, wrote to Podesta.

"I have a conflict," Podesta wrote curtly.

Bonner, surprised, wrote, "Really, I thought you were cooking! Now what!"

"I only cook for Hillary," Podesta wrote.

Podesta Needs to Tell Brock to "Chill Out"

In January 2016, Podesta emailed other top campaign officials, with the subject line "Brock," asking whether he should tweet at Brock to "chill out" with his attacks on the physical fitness of Bernie Sanders.

Neera Tanden, another trusted Clinton ally, wondered in an email to Podesta whether Brock is in-fact a "Republican plant." Podesta tweeted that Brock should "chill out." 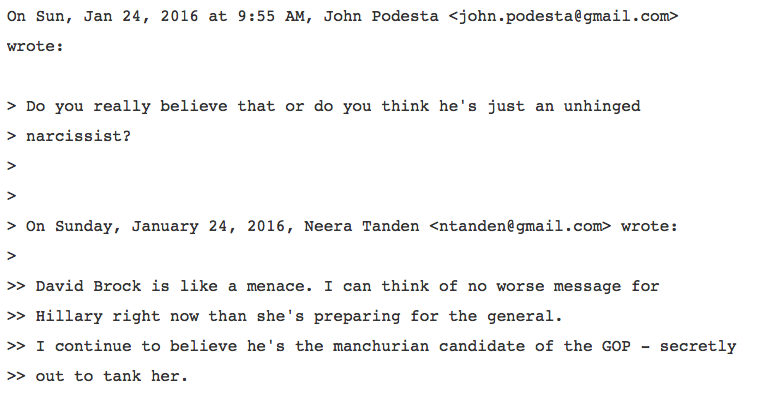 Also in January 2016, Podesta called Brock an "unhinged narcissist" after he told Politico that Clinton was beginning to focus her attention on Republican Donald Trump instead of Sanders.

Tanden questioned Brock for the second time that month, writing that he is "like a menace" and that she continues to believe that he is "the manchurian candidate of the GOP—secretly out to tank her."

"Do you really believe that or do you think he's just an unhinged narcissist?" Podesta asked.

"I truly believe he's an unhinged soulless narcissist," Tanden replied. "Because I'm not actually a conspiracy theorist like David Brock." 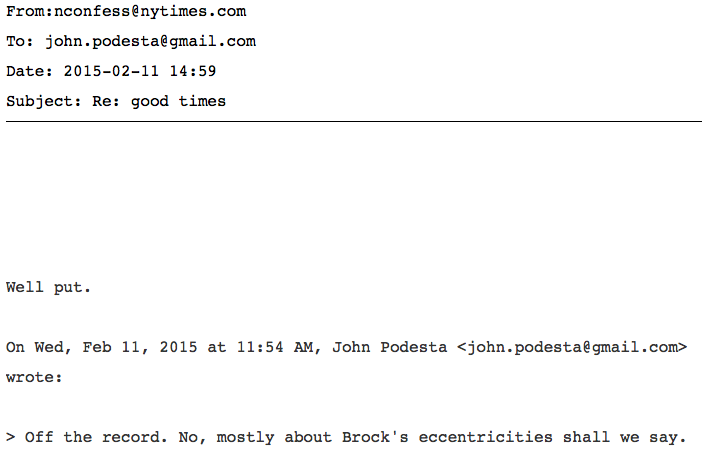 In February 2015, Nick Confessore of the New York Times emailed Podesta to ask whether Brock was straining relationships with Obama loyalists that the Clinton campaign could hope to work with.

"Can you offer any wisdom on whether this contretemps between Messina and Brock tells us anything about the future of the other Obama alums who have found places, or are seeking them, in Greater Clintonland?" asked Confessore. "To put the question more directly—is this blow up over Media Matters going to make it harder for the Clinton folks to bring in and use effectively the best of the Obama alums?"

Podesta's feelings on Brock were clear in his short "off the record" response.

"No, mostly about Brock's eccentricities shall we say," Podesta wrote.