December 2019 is shaping up to be one of the most momentous months on record for the pro-truancy movement. One week after Kamala Harris, the anti-truancy former attorney general of California, ended her failed presidential campaign, TIME magazine named celebrity truant and climate activist Greta Thunberg the "Person of the Year."

"Thunberg began a global movement by skipping school," TIME magazine explained. The renowned truant, who will turn 17 in January and is the youngest person ever to receive the once-relevant publication's top honor, launched her career in celebrity activism at age 15.

"I am thinking: what am I missing?" Thunberg said at the time. "What am I going to learn in school? Facts don't matter anymore, politicians aren't listening to the scientists, so why should I learn?"

Thunberg's teachers, and even her parents, weren't thrilled with her decision to shirk her scholarly commitments to go on long boat rides. Nevertheless, she persisted. Thunberg continues to urge children around the world to eschew their education and "participate in the climate resistance movement."

As Thunberg was making a name for herself as the most influential truant on the planet, then-Attorney General Kamala Harris (D., Calif.) was wrapping up her term as the top law enforcement officer in America's most populous state. Harris, who had pledged to get "tough on truancy," endorsed a controversial state law in 2011 that led to the arrest and prosecution of parents whose children were unaccountably absent from school.

Harris's principled disdain for truant schoolchildren did not abate on the campaign trail. Back in October, while on a tour of small businesses in Des Moines, Iowa, Harris reportedly scolded a number of school-aged kids she encountered on the street, asking the children, "Why aren't you in school?" She also suggested she might make prosecuting truancy a federal responsibility if elected.

If Harris managed to run a minimally competent and coherent presidential campaign, she might have been able to wield the considerable powers of the presidency in order to eradicate truancy from the face of the earth, beginning with the arrest and prosecution of Thunberg. Alas, she could not.

As a result, Thunberg's recognition as "Person of the Year" comes at a time when she no longer has reason to fear punishment for her crimes. The remaining Democratic candidates for president have expressed no interest in bringing truants to justice. A day of reckoning may yet come for Thunberg and her fellow child scofflaws. But it is not this day.

Biden, Harris Not Welcome on the Campaign Trail

Harris Gets Caught in Bizarre Lie About Never Eating Grapes 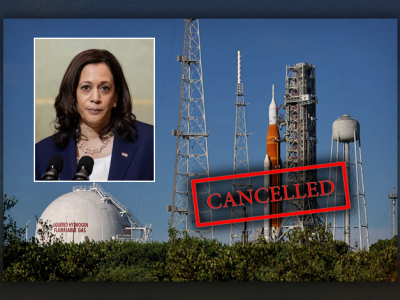