Even Patrick Murphy’s Name Is a Political Creation

Florida Democrat Patrick Murphy went by his middle name 'Erin" until he decided to pursue a life in politics in 2011, according to a Washington Free Beacon investigation.

All traces of Murphy before his political career—from mentions in the Miami Herald to his signature on official documents—indicate that he was known to all as 'Erin."

Murphy reinvented himself in 2011 after hiring a political consultant to map out his congressional run. He moved to a new district, switched party affiliations, and started telling tall tales about being a successful small business owner.

He also abandoned the name 'Erin," which he had gone by since his days as a prep school student in Miami and aspiring businessman.

Incorporation documents for Coastal Environmental Services, a failed company that Murphy’s father started for him as he attempted to assist with cleanup of the Gulf oil spill, list Erin Murphy as one of the company’s three board members. 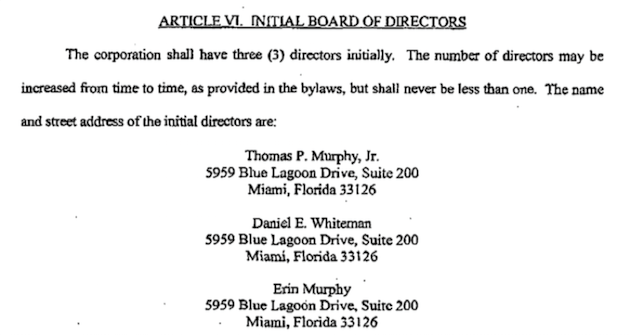 When Murphy was quoted in official company press releases, he was referred to as Erin Murphy. In the company’s 2012 annual report, Erin Murphy was still listed as a director.

The Free Beacon has determined that the name goes back to Murphy’s childhood and continued to be used until he entered politics.

The earliest mentions of Murphy located by the Free Beacon were during his high school days at Palmer Trinity, a private Miami prep school. Though he is currently referred to as 'Patrick" on the school website, records show he was not actually called that while enrolled there.

A November 1998 copy of the Miami Herald, for example, noted that 15-year-old Erin Murphy finished the football season with one interception for the 4-6 Palmer Trinity Falcons.

The name stuck throughout high school. The Herald announced after his junior year on June 6, 2000, that Erin Murphy was an honorable mention for the All-Dade County Baseball Team.

The next season, the Herald announced that Erin Murphy was expected to be one of Palmer Trinity’s top players. On March 22, 2001, Erin Murphy led his team to a 10-3 victory over Miami Christian with a hit, two walks, two runs, two steals, and two runs batted in.

After graduating from Palmer Trinity, Murphy did a year at a prestigious New Jersey boarding school called the Lawrenceville School.

A representative at the school confirmed to the Free Beacon that Murphy was known as Erin during his year there. He is currently referred to as Patrick 'Erin" Murphy on the Lawrenceville School’s alumni news page.

Murphy was Erin at home, too. An April 2000 profile of the Murphy family’s new 'European-style mansion" refers to him as Erin.

Records show that Murphy didn’t grow out of the name when he went to college and began his professional career.

A 2004 Herald story on his family’s construction business, 'Constructing a Family Dynasty," quotes Erin as a 21-year-old University of Miami student who 'spends his summers and school holidays on construction sites."

Murphy continued to use the name Erin in his professional career after graduating from college in 2006.

A copy of his 2009 application for a CPA license in Colorado (where Murphy had to apply because he didn’t meet the requirements for a Florida license) shows that Murphy signed the document as Erin.

A still-active LinkedIn profile that appears to have been created by Murphy and updated as late as 2010 lists his name as 'P. Erin Murphy."

Murphy began his transition away from Erin in 2011 when he bailed on Coastal Environmental Services and launched his political career—but it was not a clean break.

Murphy listed his name as Patrick Murphy in his initial statement of organization with the FEC in March 2011, but still signed the form as Erin. He later abandoned the signature as well, as can be seen on the statement of candidacy filing for his current Senate campaign.

The Murphy campaign and the consultant who worked with Murphy in 2011 did not respond to questions about the decision to stop using the name Erin.

Erin is not a common name for boys on either side of the Atlantic. An American named Aaron told the Free Beacon that his name was a source of embarrassment during his travels to the United Kingdom.

"When I pronounced my name in the American way, they assumed that it was spelled Erin," the source said. "People would look at me funny. Because Erin is a girl's name."

Conservative critics of Murphy said that the name change is further evidence that his life has been manicured for politics.

'Everything about Patrick Murphy is a fiction—from his resume, to his donors, to even his own name," said Ian Prior, spokesman for the conservative Senate Leadership Fund. "Makes you wonder what other ways Murphy is trying to pull a fast one on Florida voters."