In a 2002 report on Bloomberg's first mayoral press conference, the New York Daily News reported that Bloomberg used a box at his mayoral inauguration. "The box, however, ended up causing trouble; Bloomberg nearly fell while stepping off it as he returned to his seat," the newspaper reported.

The same report indicated that the lectern at the front of the room was also shorter than the one used by Bloomberg's predecessor, Rudy Giuliani, and while Bloomberg "alleges he’s in the ballpark of 5 feet 10," he "is actually several inches shorter." The city's new mayor, the report said, is "somewhat sensitive about his height." 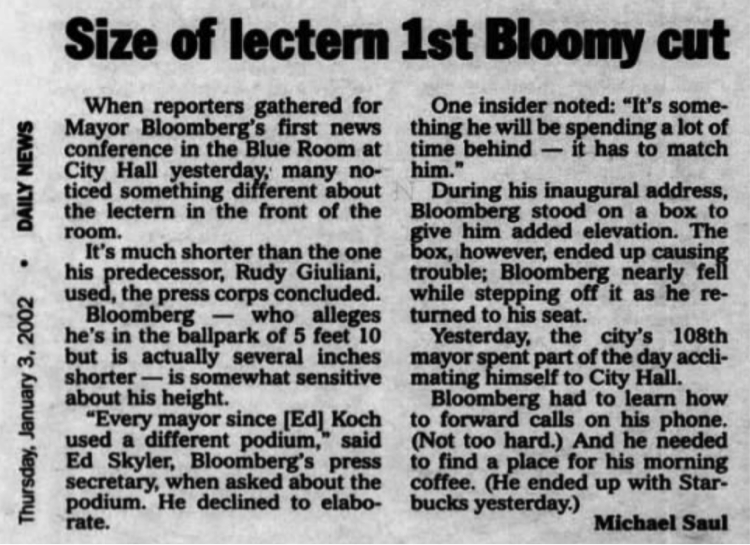 Archival footage of Bloomberg's inauguration is consistent with the Daily News's report. It does appear that the newly minted mayor stepped onto something behind the podium...

...and stumbled as he stepped away from it.

The New York Post also remarked upon Bloomberg's early use of a box in a 2013 piece about Bloomberg's Democratic successor, Bill de Blasio. The Post reported that the city had to bring in a mayoral podium that could accommodate de Blasio's six-foot-five frame.

In 2015, Bloomberg needed to use "a step platform" when speaking at the same podium as de Blasio. The Post estimated that Bloomberg was "nearly a foot shorter." That would place Bloomberg closer to 5-foot-5 than his purported height of 5-foot-10. 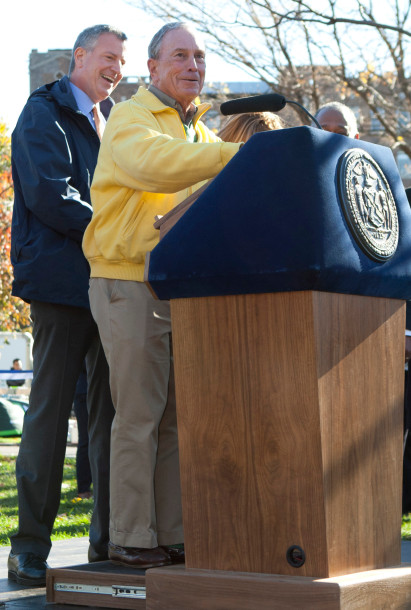 The Bloomberg campaign refused to allow a fellow candidate to use Bloomberg's podium during the 2001 mayoral race, according to a Daily News report. "This is our podium," a Bloomberg spokesman told the six-foot-one Herman Badillo when he tried to use it during the Dominican Day Parade. A Bloomberg staffer picked up the podium and exited the scene. 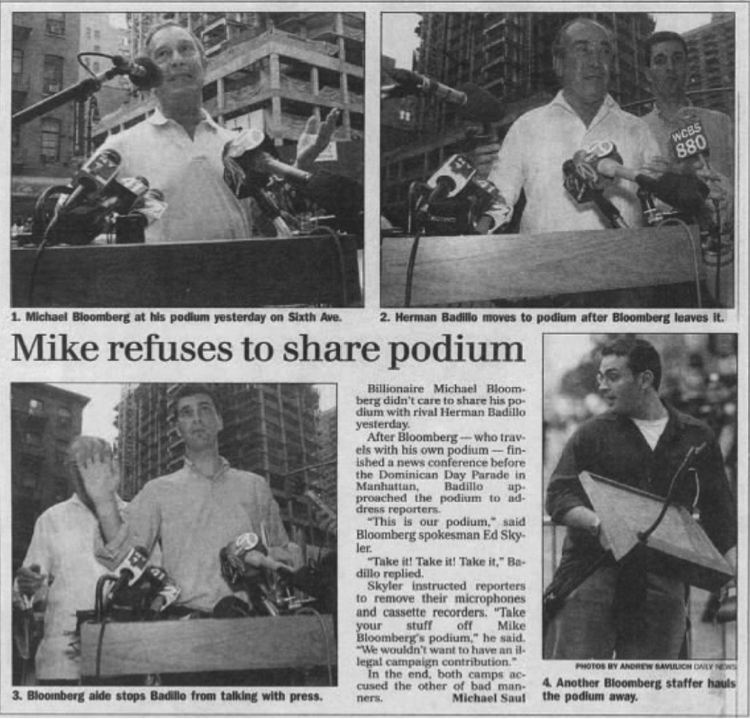 Both New York City billionaires who ran in the same circles, Bloomberg and Trump, who now exchange insults, had a decades-long friendship, with Trump publicly backing Bloomberg's mayoralty, and Bloomberg appearing on The Apprentice and giving Trump a lucrative city contract to build a luxury golf course. So close were the two men, when Bloomberg weighed entering the 2016 presidential election, Trump actually welcomed Bloomberg and declined the opportunity to criticize him when prompted by reporters. "I would love to see Michael run," said the same man who labeled his other opponents "Lyin' Ted," "Crooked Hillary," and "Low Energy Jeb." "I would say that if he ran, I’d be very happy about it."

The relationship broke down a few weeks later when Bloomberg took a public shot at Trump and said the electorate "deserves a lot better" than the Republican frontrunner. "He was a friend of mine, as far as I'm concerned. He's not a friend of mine anymore," Trump told Fox Business afterward. And when Bloomberg endorsed Hillary Clinton months later and it was time to finally come up with a trademarked insult, Trump, working with years of observation of Bloomberg's tics and idiosyncrasies, landed on "Little Michael."

Trump appears to have struck upon an insecurity of Bloomberg's, long-documented by the New York City press. A 2003 Getty photograph of Trump and Bloomberg attending a Yankees game together highlights the substantial height difference between the two men. 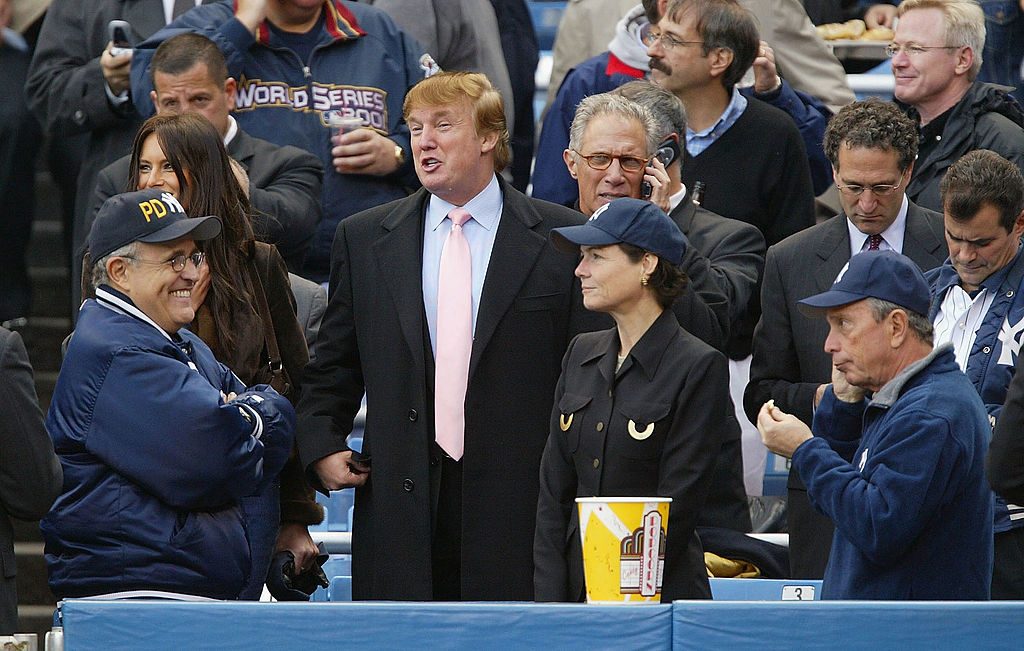 Bloomberg's actual height has long been a source of speculation and conflicting news reports, including from the man himself. His driver's license lists him as 5-foot-10. In 2001, the billionaire told a Newsday reporter that he was "in the ballpark" of six-foot-one. A few days later, he told the press, "When you're 5-[foot]-10 like me, you want to make sure the podium isn't too low." His account of his height has changed over time. In 2006, he said, "What chance does a five-foot-seven billionaire Jew who’s divorced really have of becoming president?" A 2003 Daily News article placed him at five-foot-six, as did a 2013 Post piece.

Bloomberg is hardly the first politician to use a box to overcome perceptions about his stature. Five-foot-eight former Housing and Urban Development secretary Julián Castro was seen standing on a box during a wide shot at the third Democratic presidential debate. Democratic presidential candidate Hillary Clinton used a modified podium and a box when debating Trump in 2016 to lessen the nearly one-foot difference in their heights. Famously diminutive former senator Barbara Boxer likewise had an aide carry around a "Boxer box" to boost her height during press conferences.

Presidential candidates have a good incentive to boost their heights: Taller candidates have won the presidency two-thirds of the time since 1900 and studies indicate voters subconsciously prefer tall candidates. If he wins the nomination, Bloomberg would be the first male major party nominee shorter than five-foot-eight in 100 years.